In 2011, an undergraduate/masters student at Bangor University in the UK brought physical oceanographer David Bowers an annotated map of the Irish Sea. The map showed the trajectories of colonial seabirds called razorbills (Alca torda) that had been fitted with GPS trackers. The student was interested in why the razorbills had gone to particular regions to feed. But Bowers noticed something else in the data.

“At nighttime, the birds were moving in a way that wasn’t flying; they were going too slow,” Bowers, now retired, recalls. “And crucially, they changed their direction when the tide turned from going one way to the other. . . . Straightaway I realized they were going with the flow.”

The insight lay dormant until four years later, when Bowers suggested that a Bangor student named Matt Cooper, who was interested in the use of...

Oceanographers traditionally deploy large buoys to track tidal currents. But if the GPS-tracked razorbills were indeed drifting with the tide, perhaps while sleeping or resting before foraging, the birds could provide another source of data, Bowers and Cooper reasoned.

The researchers tracked down the razorbill dataset from the Royal Society for the Protection of Birds, which had tagged the animals. Cooper, who graduated in 2016 with his master’s in oceanography, compared the birds’ movements during periods of apparent drifting with tidal data, and saw that patterns in the two datasets mirrored each other. As the tides sped up, so did the birds, and when the tide turned, the birds changed direction by 180° (Ocean Sci, 14:1483–90, 2018). “It’s overwhelming evidence that they are moving with the tide,” Cooper says.

Drifting seabirds could offer several advantages over traditional ocean monitoring. While buoys tend to converge in a few major oceanic streams, birds only drift for part of the day or night before picking up and flying to new locales. They also go places that buoys can’t, such as close to shore, Bowers adds. And the best part: the data already exist. “People all over the world have tagged seabirds to see where they go,” says Cooper. Using these animals to assess ocean currents—“it’s recycling of data.” 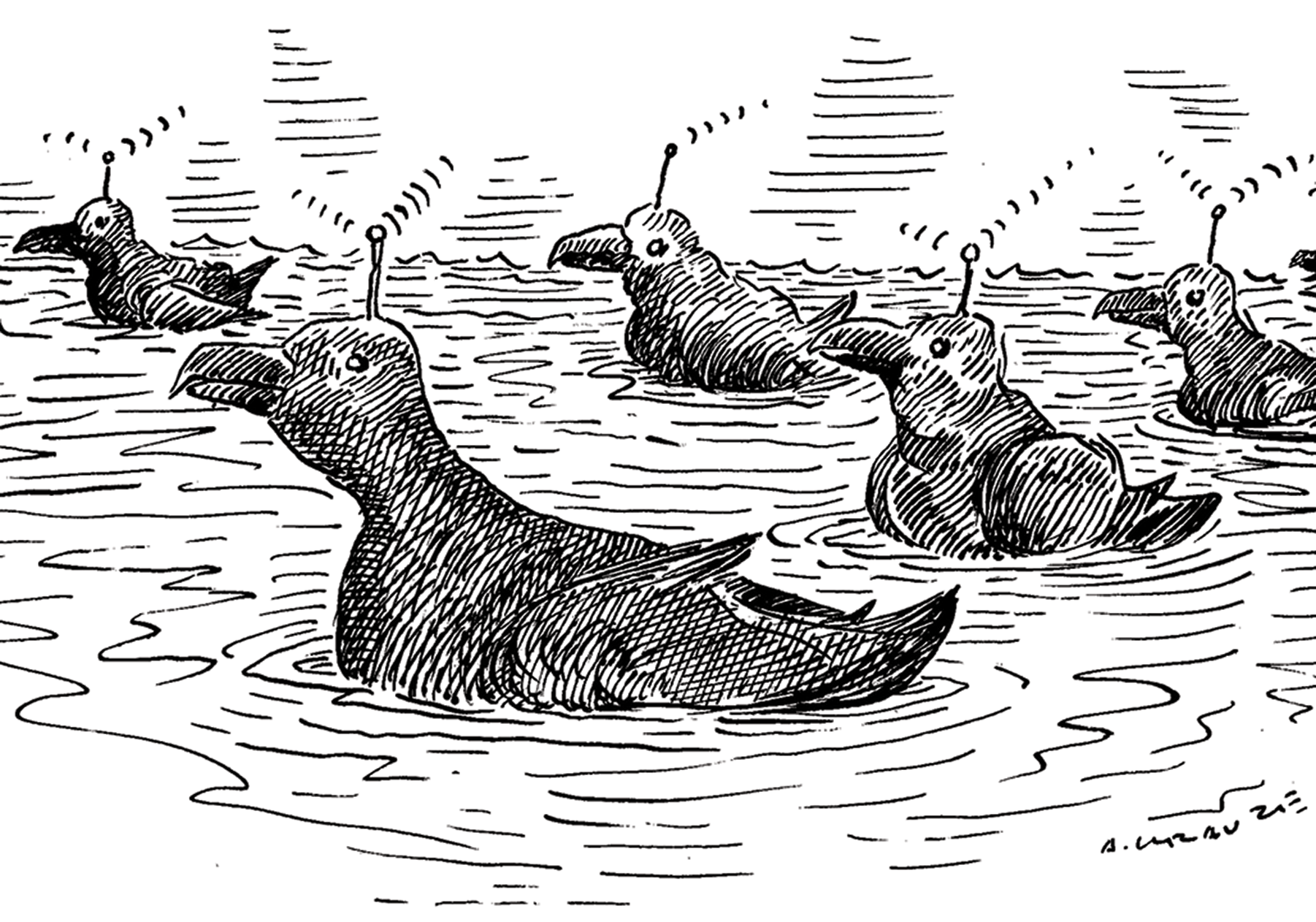 It’s not the first time that researchers have turned to seabirds to monitor physical properties of the world’s oceans. Willem Bouten, a computational ecologist at the University of Amsterdam, started tracking seabirds in the early 2000s and soon noticed patterns of movement that seemed to be linked with ocean currents. He and his colleagues confirmed the drifting behavior among lesser black–backed gulls (Larus fuscus) in the North Sea off the coast of the Netherlands. Comparing the birds’ movements to a model of the tides, they found that “it matched perfectly,” Bouten says (Ibis, 153:411–15, 2011). And in 2014, Nagoya University seabird biologist Ken Yoda showed that tagged streaked shearwaters (Calonectris leucomelas) could be used to track water currents off the northeastern coast of Japan (Prog Oceanogr, 122:54–64).

As living organisms, however, birds are “not a sensor that you can control,” says Bouten. And in some cases, their behaviors may complicate the data. In Cooper’s analysis, the speed at which the birds were moving was not quite the same as the tidal speed predicted by an oceanographic model. It could be that the models were wrong, says Bowers, or that the birds were paddling.

Another risk is that the birds may be pushed by the wind in a way that causes their path to deviate from the currents below the surface, a phenomenon known as slip. “We have to think about the degree of slip to estimate ocean currents,” Yoda tells The Scientist in an email. “Nobody knows the strength of the effects.” As a result, he adds, “the method is not an alternative to satellites, drifter buoys, or current-meter moorings.”

Still, he and others argue that seabirds could provide a wealth of additional information on ocean currents. Bouten says that he and his collaborators have tracked some three or four hundred birds floating on the ocean’s surface and that the data are available to oceanographers. To date, he hasn’t gotten any requests. “I think that’s because people are not used to this.”

Bowers agrees. “I suspect that for some time oceanographers . . . won’t trust the seabirds because they’re not perfect drifters,” he says. But, “they’ve got advantages. I suspect as time goes on, people will explore those advantages.”