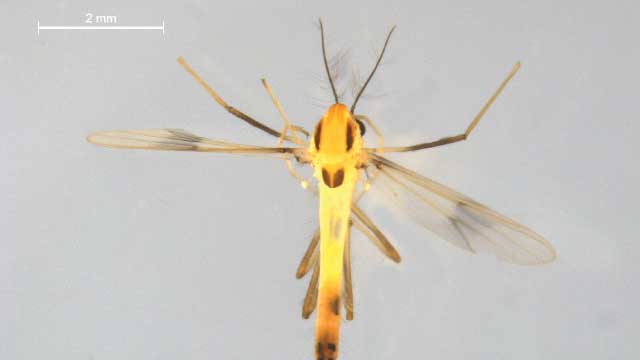 ONE AMONG MANY: Stenochironomus gibbus (above) and Manoa xianjuensis (below) are just two members of the hyperdiverse Chironomidae family of flies. XIAO-LONG LIN

When Xiao-Long Lin started a master’s/PhD combo program in the College of Life Sciences at Nankai University in Tianjin, China, in 2010, he was just hoping that the degree would help him land a job. But once he got a taste of identifying new insect species, there was no turning back.

He focused on cataloging diversity in nonbiting midges of the chironomid family. “I spent all my time collecting a lot of specimens in summer and in winter in one province,” he recalls. “I love it. It’s like an adventure to discover more species.” All told, he collected thousands of specimens in China’s Zhejiang province, comprising more than 300 species—38 of which were new to science.

Given the size of the chironomid family, though, perhaps those...

Lin wrapped up his work at Nankai University in 2013, but he wanted more. So he headed off to Norway to work with chironomid researchers Elisabeth Stur and Torbjørn Ekrem at the Norwegian University of Science and Technology’s (NTNU) University Museum in Trondheim. Over the past four years, he has continued to collect and characterize chironomid specimens, using a variety of trapping methods in the field. He took trips back to China and also collected around Norway, and he received specimens from other researchers who’d visited different parts of the world, including South America and South Africa. Chironomids are found worldwide, including in Antarctica, where they are the only native insects. “You have them literally everywhere,” says Ekrem.

In his earlier work, Lin had characterized the midges he collected based on their physical characteristics. But morphological analyses are not always reliable, he says, as sometimes unexpected variation within a species can mislead even the most trained eyes. So at NTNU, Lin adopted DNA barcoding techniques that use genetic data, exploring established and new markers to more definitively delineate species boundaries in this group.

From the tens of thousands of fresh samples he acquired, Lin prepared more than 2,000 slides for morphological analysis and analyzed the genomes of about 500 of those specimens. In the end, he identified an additional 30 new chironomid species (eight of which he describes in Insect Syst Evol, doi:10.1163/1876312X-00002172, 2017) and added about 1,000 DNA barcodes for more than 350 species to the growing reference library database. “Xiao-Long further expanded our reference library on chironomids,” says Stur. “His contribution to the barcode reference library has been really good and will help future monitoring of this group using DNA barcoding.” 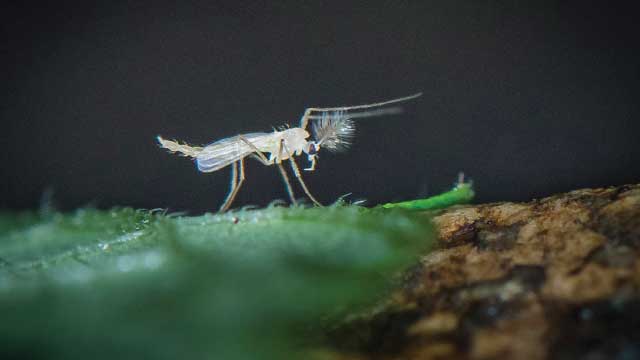 Ekrem adds that the diversity of this group never ceases to amaze him. “When it comes to morphology, you think you’ve seen most of the different combinations of characters when you have been looking at a few thousand species. But whenever you discover a new species, there’s yet another combination of features.”

Chironomids’ diversity and widespread range can be a valuable tool for monitoring the ecosystems that the insects are a part of. It’s possible to “use species compositions in different environments to say something about the health of that ecosystem,” says Ekrem. In fact, the European Union has requested that chironomid surveys be incorporated into assessments of water quality, Cranston notes.

In addition to monitoring today’s ecosystems, researchers are also using chironomid diversity to recreate past environmental conditions, analyzing the fossil assemblages in core samples taken from various soils and sediments to estimate mean temperatures thousands of years ago, for example. And, of course, as researchers dig deeper into the past, they’re only going to add to the impressive diversity of chironomids. “We haven’t even mentioned the astonishing preservation of (and abundance of) chironomid adults in ambers, some of great age (100 million years old),” Cranston says.

Although the task of cataloging this hyperdiverse group can seem overwhelming, researchers in the field are not dissuaded, says Ekrem. “Let’s sample as much as possible, get barcodes on all these species, without really knowing what they are yet. . . . It’s a way to get the genetic data registered, and get it out there so people can see it.”

And Lin, who defended his master’s/PhD thesis at Nankai in 2015 and officially wrapped up his PhD at NTNU last summer, says he doesn’t mind putting the effort in. “It’s basic work, but someone has to do this.”