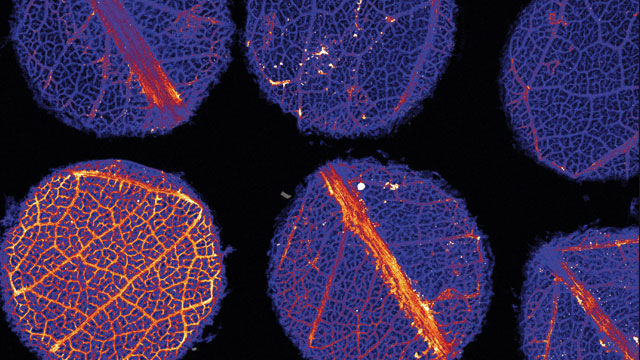 At the tail end of the century in which most major gold rushes took place around the globe, Emil Lungwitz reported something unusual: plants seemed to be picking up the precious metal. Writing in the Mining Journal in 1900, Lungwitz—an inventor from Brooklyn, New York—described “the lixiviation of gold deposits by vegetation.”

After more than a century, Lungwitz’s keen observation may help modern-day prospectors hit their own mother lodes. This past October, researchers in Australia found evidence of gold particles inside the leaves of a eucalyptus tree in Western Australia and located a deposit of gold more than 100 feet beneath it. “Finding such high concentrations of gold in the foliage of this tree growing over a gold deposit buried beneath 35 meters of weathered rock was a complete surprise,” says Melvyn Lintern, a geochemist at Australia’s Commonwealth...

During the 1950s and ’60s, researchers in Canada, New Zealand, Siberia, and the U.S. confirmed Lungwitz’s suggestion that traces of gold (Au) can turn up in plants. In 1978, Christine Girling and Peter Peterson—who at the time were both at London’s Westfield College—described the uptake, transport, and localization of Au particles in plants, and suggested that biogeochemical prospecting for gold might be a promising alternative to more traditional ways of locating the precious metal. But the technology used at the time—neutron activation analysis—was not foolproof, and the discovery and confirmatory processes could not be scaled up to meet the demand for new gold.

By the early 1990s, researchers had confirmed the presence of Au particles in live plant tissues using scanning electron microscopy. At the time, Colin Dunn of the Geological Survey of Canada was scanning trees across the country in search of untapped gold. While miners dug deep beneath the Earth’s surface wielding picks and pans, Dunn was cruising above suspected but unworked deposits, sampling foliage by helicopter.

“Plant roots integrate the geochemical signature of a large volume of soil, contained groundwaters, and sometimes the underlying bedrock,” says Dunn, who is now an independent geochemistry consultant based in British Columbia. Particles foreign to a plant that have infiltrated its leaves can be powerful indicators of what surrounds its roots. So when specks of gold make it to the very tops of trees, it’s a fairly strong signal there may be treasure buried beneath. A tree’s deep-set roots make it “effectively a biological drilling rig,” says geochemist David Cohen of Australia’s University of New South Wales.

GOLD LEAF: Eucalyptus leaves showing traces of various mineralsMELVYN LINTERNWhile plenty of groups have published accounts of gold uptake by plants, fewer have definitively demonstrated the active biogeochemical absorption of Au. Lintern and his colleagues did just that with their results from Western Australia, which they published in Nature Communications. (doi:10.1038/ncomms3614, 2013).

To be sure of what they had found, Lintern and his colleagues sampled eucalyptus foliage at the Freddo Gold Prospect—about 39 kilometers north of Kalgoorlie, Western Australia—clipping leaves from multiple locations on each tree. They also sampled twigs, bark, leaf litter, and soil. Back in the lab, the researchers analyzed the dried specimens using a synchrotron coupled with an X-ray fluorescence microprobe, calculating the concentrations of Au contained in each.

“The study presents good evidence of Au having crystallized within the vascular system of plants growing in the wild, implying the Au has passed in solution across the root membrane and is not simply incorporated dust,” says Cohen, who was not involved in the work. “It has also provided the wider scientific community some consciousness-raising of a method that has a long history amongst the small exploration geochemistry community.”

Compared with traditional prospecting tactics, biogeochemical approaches cause little environmental harm. Typically, no more than a handful of leaves are needed to confirm the presence of gold. That such sampling can be conducted year-round is “a powerful reason for applying the methods during the snow-covered months in the Northern Hemisphere when it is very difficult to sample soil,” adds Dunn. But the approach has yet to catch on.

Despite significant technological advances in the last 30 years and “a heap of biogeochemical studies conducted at mineral-deposit scales up to regional scale,” says Cohen, “biogeochemistry has generally been treated as an interesting but not a routine method for mineral exploration.”

But gold talks. Once biogeochemical explorers have optimized their practice, prospectors are likely to listen. And as the world’s known mineral deposits continue to be depleted, they might even be all ears.

In the meantime, geochemists are working to develop techniques to uncover gold deposits hidden beneath exotic, transported cover, such as sand dunes and river sediments—surface “environments contain[ing] materials that bear no geological relationship to their underlying rocks,” Lintern says. By sampling foliage, he adds, researchers aim to “see through this cover, [creating] a glass Earth, in effect.”

Correction (January 10): The original caption for the bottom image incorrectly stated that specks of gold were visible in the leaves shown in the photograph.The image actually shows traces of various minerals. The Scientist regrets the error.