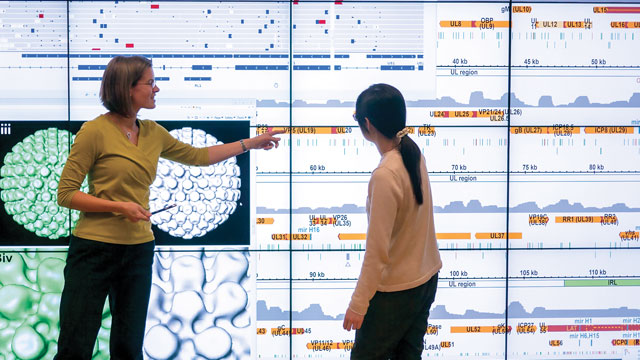 Charles Grose, a virologist at the University of Iowa Carver College of Medicine, was perusing the advance online literature last November when a paper about the genetic diversity of the virus that causes oral herpes—herpes simplex virus 1, or HSV-1—rang a bell (J Virol, 88:1209–27, 2014). Grose was particularly struck by a diagram depicting the geographic clustering of HSV-1 genomes.

The figure compared 26 HSV-1 genome sequences and depicted nearly all of them as being most closely related to strains from the same region of the world. Five of the viral strains isolated in North America and Europe clustered together, but there was one outlier. A North American strain—KOS, named for its original source, virologist Kendall...

The paper’s authors explained the anomaly in general terms as the effect of human travel or interactions, and first author Moriah Szpara of Pennsylvania State University says that she imagined a number of reasonable explanations—including that Smith could have married a woman from Asia. But Grose had a better explanation.

As soon as he saw where the KOS genome clustered geographically, Grose thought of the years (1976–84) he spent as Smith’s colleague in the microbiology department at the University of Texas Health Science Center (UTHSC) in San Antonio. Grose, who served in the Army during the Vietnam War, explains that there are four large military bases in San Antonio, so it was quite common for scientists and physicians who had served in the military to seek employment at UTHSC. “Talk about military service was common amongst the faculty,” he says. “We would have afternoons where we’d just sit together and have coffee.”

As part of those casual conversations, Grose learned that Smith had served in the Korean War in the early 1950s. The faculty were also familiar with Smith’s isolation of the KOS strain of HSV-1. “When he wanted more virus, he would just swab his own mouth,” Grose recalls. “We all called it Kendall’s virus.”

Grose immediately made the link between the clustering of the KOS viral genome with other Asian strains and the time Smith had spent in Korea. Grose explains that, during the Korean War, American and South Korean soldiers interacted closely—participating in maneuvers together and eating in the same mess halls—which would have provided multiple opportunities for Smith to pick up an Asian strain of HSV-1.

“It’s very likely that he acquired the virus in the military,” Grose says—a theory that he published as a letter in January (J Virol, doi:10.1128/JVI.00010-14). Without the combination of his virology expertise, his military experience, and his history with Smith, Grose probably could not have made the connection. “It’s an amazing coincidence,” he says.

“It was excellent closure for the story, where it left my imagination and became something much more realistic,” says Szpara. “It was a different twist than what I thought of, but it makes perfect sense.”

Even more surprising to her was that she had found geographic clustering of the HSV-1 genomes at all. Because pathogens tend to thrive in cosmopolitan areas, where people from different geographic backgrounds constantly interact with each other and share herpes viruses, Szpara did not expect regional genetic relationships to be so obvious.

Part of that clarity can be attributed to HSV-1’s DNA genome. RNA viruses mutate quickly, but DNA viruses are much more stable. “They don’t change very much over 100 years or 1,000 years,” says Grose. Szpara suggests that another reason her team observed regional clustering might go back to Kendall Owen Smith and the other investigators who initially isolated the viral strains used in the study. “All of these strains are 25 or 40 or 80 years old,” she says. “[Today,] I’m not sure that you would find it to be so homogeneous.” In the future, Szpara plans to sample HSV-1 in cities to see how much viral genomes have intermixed over the years.

“This is what always happens in science,” says Szpara. “We have an idea of what we’re studying and then in the course of researching this idea, other things come to light.”