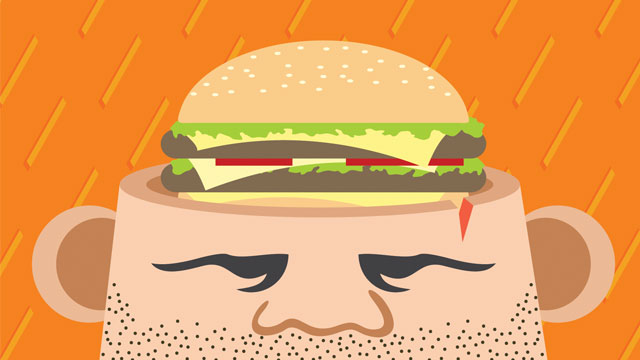 Imagine yourself eating a juicy burger, topped with a perfectly melted slice of cheese and nestled in a soft bun. Your brain experiences a sweet spike in pleasurable chemicals as your teeth tear through the carbohydrate exterior and sink into the fatty, proteinaceous core.

Given humankind’s long history of struggling to find food, it makes sense that people are highly motivated to hunt it down, and that we experience intense pleasure when we finally eat it. “[If] you never know when you can have your next meal, then it really pays to have a few extra kilos on your [body],” says Lauri Nummenmaa, a neuroscientist at Aalto University in Finland. Our brains are still wired to seek nutrients “even though food and nutrition [are] omnipresent in Western society.”

But gustatory pleasure may actually be dulled in obese people, according to work Nummenmaa and his colleagues published...

While obesity or related changes lead to pathological neuronal activity, other new work indicates that a little body fat might be good for the brain.

“If there is insufficiency in [the food reward processing] system, the compensation would be to reach the pleasurable level [by eating] a little more,” explains Zdenka Pausova, a senior scientist at Toronto’s Hospital for Sick Children who was not involved in the study.

Nummenmaa speculates that, as people increase their caloric intake, their response to opioids lessens. Perhaps this spurs them to overeat even further, in hopes that the pleasurable sensations will return.

The finding “is consistent with addiction biology in general—where excess stimulation via addictive substance causes increased neurotransmitter secretion,” Catherine Carpenter, who studies public health at the University of California, Los Angeles, writes in an email to The Scientist.  “[The] number of neuroreceptors decrease[s] in response.”

“Where do these differences in brain receptor densities come from?” asks Nummenmaa. “Do they follow up people gaining weight, or are they . . . a risk factor for gaining weight?”

To begin to answer these questions, Nummenmaa’s team again imaged the availability of dopamine receptors and μ-opioid receptors, this time in the brains of 16 morbidly obese women who were planning to have bariatric surgery. They then imaged the same women’s receptors again six months after the procedure.

The bariatric surgery findings indicate that obesity or related nutritional or metabolic states alter μ-opioid receptor availability. Other work shows how people’s μ-opioid receptor subtypes might influence susceptibility to obesity. A recent study by Pausova indicates that adolescents with one μ-opioid receptor variant eat relatively low levels of fat and tend to weigh less and have lower body fat than their peers (Mol Psychiatry, 19:63-68, 2014).

It may even be possible that lowered receptor availability in obesity stems from an overly responsive food-reward circuit, suggests Kent Berridge, a University of Michigan psychologist and neuroscientist who was not involved in Nummenmaa’s study. People with a hyperactive reward system get intense pleasure from food, and so they overeat to tap into those sensations, Berridge speculates. This overstimulation of their pleasure circuitry ultimately weakens it. 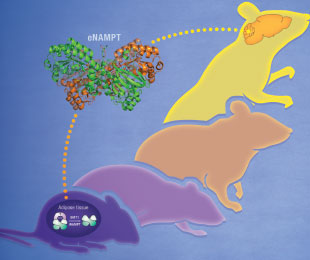 WEIGHING ON THE MIND: Adipose tissue may serve as a systemic NAD+ modulator, according to research conducted by biologist Shin-ichiro Imai of Washington University in St. Louis. The key enzyme driving effects seen in the hypothalamus is likely NAMPT (nicotinamide phosphoribosyltransferase).ILLUSTRATION BY KEI HAYASHIBut while obesity or related changes may lead to pathological neuronal activity, a little body fat might actually be good for the brain. Shin-ichiro Imai, a molecular biologist at Washington University in St. Louis, showed earlier this year that fat tissue in the bodies of mice releases an extracellular form of nicotinamide phosphoribosyltransferase (eNAMPT), an enzyme that travels to the hypothalamus, gives animals energy during fasting, and activates antiaging pathways (Cell Metab, 21:706-17, 2015).

“Your fat tissue is actually very important to keep the function of the control center of aging, which is the hypothalamus,” says Imai. “This really suggests a novel idea.”

Most tissues make NAMPT on their own, using it to catalyze basic energy-producing reactions in the cell. But fat cells also convert NAMPT into a highly active form and release it as eNAMPT in a circadian-related fashion, particularly during times of fasting. For many years, the role of eNAMPT has been mysterious and controversial.

Imai and his colleagues decided to test eNAMPT’s role by engineering mice so that they could not express NAMPT in their fat cells, thereby also preventing them from making eNAMPT. They then looked for effects on a number of other tissues. Because some form of NAMPT is necessary for the synthesis of NAD+, a critical coenzyme in energy metabolism and its circadian control, this metabolic compound is reduced wherever NAMPT is reduced. Sure enough, levels of NAD+ decreased in the hypothalamus in the engineered mice. This suggested that the hypothalamus depends on eNAMPT specifically from fat cells to maintain normal NAD+ levels. Additionally, during normal waking hours at night, the engineered mice were less active than usual, and activity of the anti-aging protein SIRT1 was also reduced.

The researchers also applied eNAMPT to pieces of tissue dissected from the murine hypothalamus, showing that the enzyme increased the neuronal activity of the cells. And they also demonstrated that overexpressing NAMPT in adipose tissue of mice leads to animals with high levels of NAD+ in the hypothalamus and high energy at night.

Imai speculates that animals evolved this “novel intertissue communication mechanism” so that they would be spurred to find food in times of famine. When an animal is nutrient-deprived, it becomes sluggish. But release of eNAMPT from fat cells spurs it into action.

“It’s completely plausible, and the evidence looks pretty interesting in this paper, but definitely it’s the sort of thing that’s going to need some validation over time,” says Joseph Baur, who studies aging and metabolism at the University of Pennsylvania’s Perelman School of Medicine.

Today, food is much more abundant. But eNAMPT may exert an enduring positive influence by triggering the SIRT1 anti-aging pathway. This may be why some studies have shown that people live longest when they are very slightly overweight. (See “A Weighty Anomaly.")

Imai says that brain-fat interactions evolved for a valid purpose. The challenge is figuring out how to optimize them in our modern society, so that we can both prevent obesity-related pathology and preserve fat’s beneficial roles.

“Being slightly chubby is totally different from being morbidly obese,” writes Imai in an email. “Maybe a take-home message is that too much is always bad.”