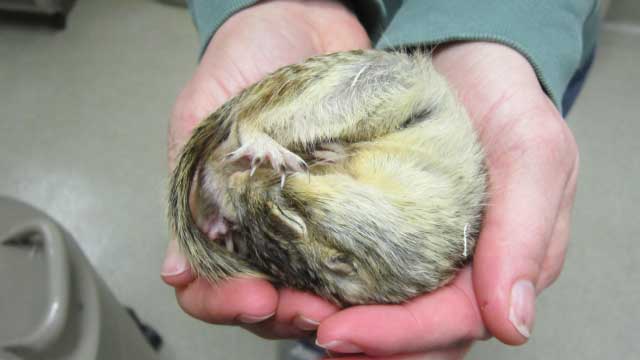 CURLED UP FOR A NAP: A thirteen-lined ground squirrel assumes a posture typical of hibernation in the hands of University of Minnesota Duluth researcher Matthew Andrews.JAMES BJORK

Every fall, thirteen-lined ground squirrels (Ictidomys tridecemlineatus) in the United States retreat to their underground burrows for a long winter’s nap. They curl up in a tight ball and enter a state of torpor, where their body temperature drops to just a few degrees Celsius, their metabolism plummets by up to 95 percent, and their hearts beat just 3 to 10 times per minute. “It looks like they are dead,” says electrophysiologist Alexey Glukhov of the University of Wisconsin School of Medicine and Public Health. “When you touch them, they are cold and they are rigid.”

But like all hibernating animals, every week or two the squirrels stir from their slumber. Sometimes they’ll move around; other times they’ll simply...

It looks like they are dead. When you touch them, they are cold and they are rigid.—Alexey Glukhov,
University of Wisconsin School of Medicine and Public Health

To get a better understanding of what’s going on in the squirrels’ hearts, molecular biologist Matthew Andrews of the University of Minnesota Duluth and his colleagues analyzed the complete proteomes and transcriptomes of heart tissue collected from squirrels in different seasons—when up and about during the warm months, when in torpor, and when aroused during hibernation. “Proteomics [are] not nearly as high-throughput; the sequencing methods of nucleic acids are far superior,” Andrews says. “But many people would argue that the phenotype is one that’s more reflective of protein levels than abundance of RNA. . . . We were able to combine these two to get very good, clean proteogenomic analyses of these proteins that are found in the hibernators.”

From April through October, the researchers housed live-trapped squirrels in a typical rodent facility at a comfortable 18 to 21 °C and with a 12-hour light-dark cycle. Starting in November, they moved the animals to a walk-in cold room kept at 5 °C and in complete darkness to simulate the hibernation conditions of being underground in the winter. At six different time points throughout the year, the researchers sacrificed three males and three females and sampled their heart tissue. These included three months—April, August, and October—when the animals were active, as well as two times in January, when the animals were in torpor and when they stirred from their slumber, and once in March, during arousal from torpor. The results revealed dozens of proteins that were differentially expressed at each stage (J Proteome Res, 14:4792-804, 2015).

Most of the differences were starkest when comparing the warmer months to the hibernating season, notes metabolic biochemist Jim Staples of the University of Western Ontario. “There aren’t many changes between when the animals are really, really cold and torpid and when they’re aroused in the winter.” And proteins that were downregulated in the cold months started dropping off as early as October. These included sarcomeric, muscle contractile, and muscle structural proteins, all of which play a role in heart function.

“It’s a deeper and more advanced study which can help us to answer the questions” about how the squirrels survive drastic swings in body temperature and metabolism as they go into and out of torpor, says Glukhov, who has studied the electrophysiological and molecular mechanisms that help protect hibernators’ hearts. The results may reveal “what kind of cardiac signaling [is] activated during the hibernation.”

Andrews and his team also reported the discovery of hundreds of novel isoforms in ground squirrels. While the animal’s genome was recently sequenced, it is not well annotated, and how the genes are transcribed and spliced may differ from better-studied rodent species, such as mice and rats. “Almost everything we looked at was new and interesting,” Andrews says. “This gave us this really good, comprehensive picture.”

One novel isoform the researchers identified was that of a ryanodine receptor, which had an amino acid sequence that differed in a number of ways from predictions of the genome sequence alone, perhaps due to alternative splicing. Ryanodine receptors are important in calcium handling, which has previously been implicated as important for protecting the heart in hibernators. So the finding “reinforces what we already know about how the heart functions in hibernation,” says Staples, who suggests that protein biochemists can now take a closer look at the structure of the ryanodine receptor to see how it is affected by temperature.

“This is the tip of the iceberg for this kind of proteogenomic approach,” says Andrews. His lab is now starting to apply this “more high-throughput way of doing proteomics” to other thirteen-lined ground squirrel tissues—such as the brown adipose tissue that serves to heat up the body as it comes out of torpor, as well as skeletal muscle—and he suggests that the methods could be similarly applied to diverse nonmodel organisms. “Everything from oak trees to rare Amazonian bees, you can do these sorts of studies without having mutants and stock centers,” he says. “This is really going to be a shift toward interrogating these organisms.”