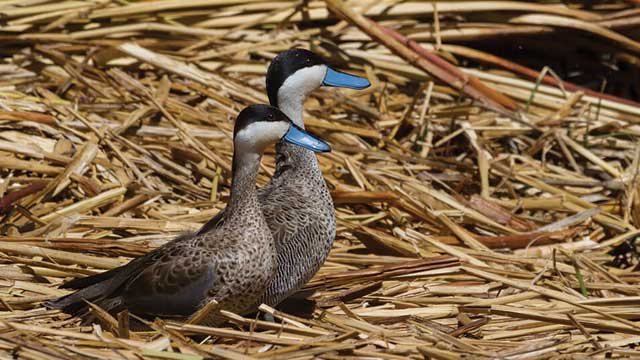 A Peruvian man from the floating man-made islands on Lake Titicaca uses a long pole to steer his wooden boat through the reeds. His son crouches on the bow, scanning the water’s surface with a flashlight. The father, a member of the Uro people, silently maneuvers the boat towards an unsuspecting blue-billed Puna teal while his son readies a hand net. With a quick swipe, the boy hauls the duck into the boat, and by 3:00 a.m. they deliver six ducks to the researchers waiting back on shore. The Puna teal is one of many resident waterfowl species inhabiting the Andean altiplano. At nearly 4,000 meters, oxygen levels are only about 65 percent of what they are at sea level, but the bird seems oblivious to the effects that altitude imposes on other...

Human visitors to Lake Titicaca are encouraged to gulp down coca tea in an effort to overcome the effects of hypoxia, or low oxygen levels. A short flight of stairs leaves you breathless, and your body compensates by increasing heart rate and breathing faster and deeper. But these changes are energetically costly to maintain. To thrive at altitude, populations adapt and evolve. And that takes time—tens of thousands to millions of years to acquire increasingly efficient adaptations.

But rising global temperatures will test species’ adaptability much sooner. For example, researchers predict that climate change will force species to seek cooler environments at higher altitudes. Yet an average low-altitude bird brought to Lake Titicaca wouldn’t fare well. “You’ll see about 90 percent hatching mortality in the eggs. The pores in the eggs aren’t big enough; they don’t have the right hemoglobin gene variants; there’s just not enough oxygen,” says Kevin McCracken, an evolutionary geneticist from the University of Miami. The 10 percent that survive, he adds, carry traits that make them more robust in the face of hypoxia. Over time, beneficial mutations accumulate along the oxygen cascade, a series of events that moves oxygen from the atmosphere into the mitochondria of cells.

Milsom, McCracken, and colleagues are in Peru to compare how five different duck species cope with reduced oxygen levels. The ducks are all year-round residents, but each species colonized the region at different points in their evolutionary past, and each one independently evolved a set of unique adaptations to deal with hypoxia. Species that colonized the area first, and are isolated from lowland populations, have different adaptations than more-recent arrivals that may still mix with lower-altitude populations.

Air pressure drives oxygen down its cascade: from the atmosphere to the lungs, from the lungs to the blood, and from the blood to the body’s cells, where mitochondria use oxygen to make energy and heat. Lower air pressure at high altitude decreases that physical force.

“Strong environmental changes, like altitude, act like an evolutionary bottleneck,” says Lucy Hawkes, a physiological ecologist at the University of Exeter who was not involved in the study, “and failing to survive them would mean failing to migrate or breed.” She says that insights from studying high-altitude physiology can inform conservation biology by helping scientists understand “how animals can really push the possibilities of their biology to survive in the ever-changing world around us.” As climate change forces species to move to higher elevations, understanding the variety of adaptations available can help scientists predict how far animals can stretch their existing physiology to cope in a low-oxygen environment. Milsom says that these predictions depend on our knowing how much plasticity there is within a species and how much time the species has to adapt.

Members of Milsom’s Peru team also study creatures in Mongolia that have adapted to extreme hypoxia. They recently published a study on the flight dynamics of bar-headed geese, which migrate from their breeding grounds in Mongolia across the Himalayas to their winter refuge in India (Science, 347:250-54, 2015). These geese have a host of adaptations that maximize their ability to fuel their cells with oxygen at extreme altitudes, sometimes upwards of 7,000 meters. But they only fly at such altitudes transiently. In contrast, the ducks in Peru all live at altitude permanently, and each species colonized the region independently.  “We get to look at replicate evolutionary experiments,” says Graham Scott of McMaster University in Ontario, Canada, “where animals have come up to high altitude and evolved these unique traits many times.”

In a makeshift lab, the team preps gas analyzers and tanks, instruments to measure lung volume, and a spectrophotometer designed by team member Peter Frappell of the University of Tasmania that analyzes the oxygen-binding properties of hemoglobin. Each experiment examines a different segment of the oxygen cascade. The researchers compare lung volume and measure the birds’ cardiorespiratory responses to experimentally altered oxygen levels; they take heart, lung, and muscle samples from each species to study metabolic enzymes, muscle fibers, and the degree of tissue vascularization.

The team has found that the Puna teal, which colonized the region several million years ago and has speciated from its lowland ancestors, readily copes with extreme hypoxia. Even when the researchers dial down oxygen levels to mimic conditions at the peak of Mount Everest, almost 9,000 meters up, the Puna teal deepens its breathing, but otherwise remains unaffected. In contrast, the yellow-billed pintail colonized Lake Titicaca only a few tens of thousands of years ago and has more contact, and therefore gene flow, with its lowland counterparts. Less time at altitude means less-efficient adaptations: the pintails are far more sensitive to hypoxia and breathe much deeper and faster. Even the teal’s hemoglobin has adapted to bind oxygen with greater affinity than that of other species. Individuals can acclimatize to altitude in the short-term, but long-term adaptations spread throughout populations are a function of natural selection. Over time, teals have acquired a variety of adaptations and lost their ancestral acclimatization response. “They are making the best use of every bit of air they bring in,” says Scott.