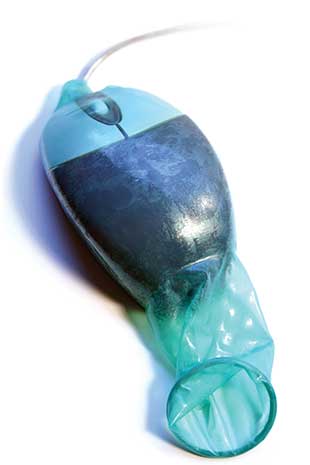 CHAT ROULETTE?: Some studies have found that the appearance of sites such as Craigslist in a given region correlate with increasing HIV incidence.© ISTOCK.COM/ANDREAS HERPENSHooking up has never been easier. For those who want to avoid the crowded, boozy bar scene, finding a sexual partner is just a click away online. One popular site for such cyber-assisted trysts is Craigslist, which has an entire section dedicated to “casual encounters,” categorized by who’s looking for whom. Also, a number of new smartphone apps have hit the market recently, bringing no-strings-attached sex to the palm of one’s hand.

With sex so much easier to come by, many researchers and activists have raised concerns about technology increasing the spread of sexually transmitted diseases, such as HIV/AIDS. Social-networking technologies seem especially popular among gay and bisexual men, particularly African Americans and Latinos, some of the most at-risk populations for HIV/AIDS in...

“The take-away message is that in the age of social media, new social routes of HIV transmission are possible,” study coauthor Jason Chan, now at the University of Minnesota, told The Scientist in an e-mail. “On the users’ end, the adage ‘buyers beware’ is still very applicable in this context. . . . It would be fruitful for health-care practitioners and academics to look into these new avenues to uncover areas that are in need of intervention.”

But the relationship between social-networking technologies and HIV risk is not straightforward. First of all, it is still unclear whether the correlations that have been documented between such technologies and HIV incidence are indicative of causality, notes Ian Holloway, a social behavioral scientist at the University of California, Los Angeles’s Center for HIV Intervention, Prevention, and Treatment Services. Perhaps the technologies are increasing HIV risk, or perhaps they are simply attracting those who tend to engage in sexually risky behaviors. “Really, the question of whether it’s selection or influence that’s contributing to greater HIV risk behavior among guys who use these platforms is unknown,” says Holloway. “There haven’t been good longitudinal studies to tease out which of those mechanisms is in place.”

In the age of social media, new social routes of HIV transmission are possible.

Another consideration is what types of sexual behaviors tend to result from Internet hookups. UCLA’s Sean Young, a faculty leader of the new UC Institute for Prediction Technology, and his colleagues have found, for example, that men who find male sexual partners on social-networking sites are more likely to have oral sex, which carries a much lower chance of disease transmission (PLOS ONE, 8:e62271, 2013). “If it’s easier to find people to have sex with, then it definitely increases your risk for HIV just by having a larger number of sexual partners,” Young says. “[But] that increase in sexual partners may be mitigated . . . by a change in sexual-risk behaviors, like oral sex compared to unprotected anal sex.”

People looking for sexual partners online may also be able to lessen their risk of infection by having access to information they wouldn’t necessarily have about someone they met in a bar. Many technologies geared specifically to arranging sexual encounters even provide users with an opportunity to indicate their HIV status. If honestly reported, this can result in sero-sorting, allowing people to choose a sexual partner who matches their own HIV status. “You have to have a sero-discordant sexual act in order to transmit a new case of HIV,” says behavioral health scientist Kathryn Muessig of the Gillings School of Global Public Health at the University of North Carolina at Chapel Hill. “If both people accurately know their status, it could reduce risk.”

Independent of how social-networking sites influence sexual-risk behaviors, there is evidence that these technologies are effective at spreading HIV/AIDS awareness, prevention measures, and even HIV testing. For example, the Harnessing Online Peer Education (HOPE) study, led by Young, found that people who joined Facebook intervention groups, in which peer leaders moderated discussions about HIV testing and infection prevention, were about three times more likely to request a home-based HIV testing kit than those in Facebook groups that received only general health information (Am J Public Health, 104:1707-12, 2014). Upon reading of their success, researchers in Peru contacted Young to implement a Facebook-based intervention program there, and got very similar results, with participants three times more likely to get tested for HIV. (Lancet HIV, 2:e27-32, 2015). Young and his colleagues are now gearing up to test this social media–based intervention strategy in a five-year randomized controlled trial.

So has social media helped or hurt the HIV community? According to Simon Rosser, director of the HIV/STI Intervention and Prevention Studies (HIPS) Program at the University of Minnesota School of Public Health, that’s the wrong question to ask. “Something as complex as new technology and media, it’s like asking the question, ‘Is the Internet good or bad?’ It’s just too simplistic a question when framed that way,” says Rosser. On the other hand, “asking what are the effects of the Internet, how is it changing society, and what are the benefits and risks inherent in it is very, very helpful, even critical.”