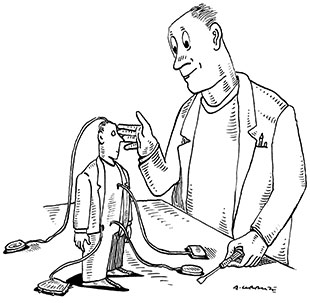 The rhythmic waves of jellyfish moving through water mesmerized Kit Parker almost as much as they transfixed his young daughter. Their weekend trip to the New England Aquarium in Boston turned out to be more than just a welcome break for the Harvard University bioengineer. For months, he had been struggling to mimic a similar motion in his lab: that of a heart pumping blood. But a crucial step in converting rodent cells in a petri dish to a beating heart eluded him.

“I’d grown really frustrated—there was some intermediate step, and we weren’t sure what it was,” says Parker. “And I’m looking at the jellyfish and thinking—all that muscle exists just to move fluid. So we took our models apart and rebuilt them as jellyfish. We thought of it as a training exercise to building a heart.” (Nature Biotechnol, doi:10.1038/nbt.2269, 2012)

Notions of replicating human organs in the laboratory began in the late nineties, says biomedical engineering researcher Michael Shuler of Cornell University who was one of the earliest users of the term “organ-on-a-chip.” Most such devices combine cell culture technologies with microfluidics in some fashion. “The need [for such structures] has become more and more obvious,” says Shuler.

Linking these miniorgans in a physiologically relevant fashion is where the major technological challenges lie.—Dan Huh, University of Pennsylvania

A human cell–based platform such as ATHENA may provide more-relevant preclinical information than animal models, according to Shuler. Traditional drug discovery “can’t be done much more quickly than we do now,” he says. But with a human-based platform such as ATHENA, a new drug could be tested in months rather than several years. Better screening platforms could also prove useful “if we’re confronted with a public emergency in terms of a health crisis,” he adds.

Although organ-on-a-chip devices rarely re-create all the functions of the real thing, they mimic the “most critical, repeating, functional units” of living organs, such as the nephrons from a kidney or alveolar air sacs from the lung, according to biomedical engineer Dan Huh of the University of Pennsylvania.

The miniature human heart developed by Parker and his colleagues, for example, only includes a single ventricle (a human heart has two, in addition to two atria), a single valve, and an optogenetic pacemaker controlled with a laser beam. The kidney, built by biomedical researcher Shuvo Roy at the University of California, San Francisco, and his collaborators, is a two-stage system with a synthetic filtration unit and a “hybrid cellular bioreactor” that replicates the kidney’s filtration and endocrine functions.

Creating these individual organ components has become increasingly feasible over the years. But integrating their functions with each other is “more than just connecting them with fluid channels,” says Huh. “Linking these [miniorgans] in a physiologically relevant fashion is where the major technological challenges lie.”

The cells that form each of the four organs on the ATHENA platform require very specific nutrient media to sustain their growth. Each of these media was designed for a small subset of cells “in a void,” says Iyer. But getting the organs to communicate requires a common medium “very much like the blood in our bodies.” Scaling the organs to one another is also crucial to the platform’s success, she adds. “It’s not going to work if we construct a liver of a 300-pound man and the heart of someone half that size,” says Iyer. When assembled, the ATHENA system is expected to fit on a typical desktop, with some organs no larger than the size of a coffee cup.

Once miniaturized and connected, the four organ systems will enable researchers to ask—and answer—questions of how human bodies absorb, metabolize, and respond to various drugs and what side effects a given drug will have on different organs—difficult to estimate with a single organ-on-a-chip.

Roy also envisions systemic studies to understand how the failure of one organ affects others. “Patients on dialysis often suffer comorbidities such as heart dysfunctions,” he says. “So it’s also a way for us to assess, for example, how a sick heart might impact a healthy kidney, or vice versa.”

Using patient-derived stem cells on the ATHENA platform could also help develop specific, individualized therapies or drug combinations. For now, the individual components of ATHENA are already being put to work in spaces beyond the lab—as potential replacement organs for patients.

“The liver technology was actually developed for extracorporeal support for patients with massive liver damage,” says Iyer. “We took that and developed it further for analytical purposes.” Similarly, the heart valve designed for ATHENA performed so well that the researchers began evaluating it for clinical use; they’re currently conducting long-term animal trials, according to Parker.

Roy’s team was already working on an implantable artificial kidney for patients; for the laboratory platform, the group is miniaturizing the replacement organs. The scaled-down versions will help “inform the design and performance of the replacement kidney, particularly in the context of the other organs,” he says.

Collectively, the ATHENA collaborators have come a long way from using rat heart cells to build artificial jellyfish. Beyond the multitude of laboratory applications, the researchers also hope their minuscule “desktop human” system will eventually take some big clinical steps. As Roy says: “We’re building tiny organs, so we might eventually be able to help [create transplants for] some very tiny pediatric patients.”