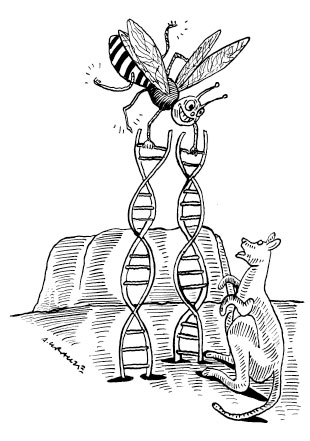 ANDRZEJ KRAUZEIn the famous case of Darwin’s finches, natural selection acts decisively, elevating a trait in the population, weeding it out, or simply ignoring it. But in actuality, natural selection can sometimes exert a more complicated influence. An unusual pattern of genetic selection turns out to be responsible for the rampant spread of the invasive Asian honeybee (Apis cerana) from Papua New Guinea into Australia, a pattern that Rosalyn Gloag of the University of Sydney and her colleagues have managed to decode.

The first Asian honeybees reached Australian shores in 2007, probably on the mast of a ship or stowed away in a shipping container. The bees made landfall in Cairns, a city on the continent’s northeastern coast, and spread rapidly from there. Bruce White, a retired government apiculture and biosecurity specialist, says that Australian officials who responded to the invasion were ill equipped to contain...

Up until now, the success of A. cerena in Australia has posed something of a biological puzzle. Under the normal rules of evolution, the invasive bees should have been hamstrung by what’s known as the founder effect—reduced genetic diversity when a population takes root from just a small number of individuals. Based on a preliminary study of neutral genetic markers by Gloag and her colleagues, A. cerana appears to have arrived in Cairns only once, with just one or a few colonies, meaning that no secondary arrivals infused the population with fresh genes to counteract the founder effect.

Low genetic diversity can have various ramifications, but in particular it should have tampered with sex determination in the bees. In A. cerana, diploid progeny develop as females while haploids develop as males. A single gene, ­­csd, governs this system, with an important caveat: a larva that is diploid and homozygous at csd is inviable. In a large, diverse population with many csd alleles, the odds of getting two of the same allele are so low that csd homozygosity rarely causes problems. But in populations with only a few csd alleles, homozygotes are more common and can drag down the colony’s reproductive output. Theoretically, this system should render bees highly susceptible to the founder effect, a prediction that has been borne out in other social insects with similar sex determination mechanisms.

To uncover how A. cerana circumvented the problem, the University of Sydney team sequenced the csd genes of bees every year after the invasion, using samples preserved by government eradication efforts. They also sampled A. cerana populations in the insect’s native range in China. They found a stock of 22 different csd alleles among native bees, but only seven csd alleles among the invasive colonies. Only three of those alleles were common during the first few years after the invasion—a massive curtailing of genetic diversity that should have doomed the Asian honeybees in Australia.

In small populations, rare alleles are likely to disappear by random chance. In this case, csd alleles that were rare in the founding population, rather than disappearing, increased in frequency over the next several years, Gloag and her colleagues reported in Nature Ecology and Evolution (doi:10.1038/s41559-016-0011, 2016). The frequency of all seven alleles in the gene pool converged toward equilibrium.

The researchers were observing a phenomenon called negative frequency-dependent selection, which occurs when alleles become less and less advantageous the more common they are in a population. In the early invading population, individuals that carried rare csd alleles would almost always produce viable offspring, since the odds of a diploid larvae ending up with two identical rare alleles is close to zero. On the other hand, individuals with common alleles would frequently produce inviable homozygotes. As the bees proliferated in their new home, rare alleles spread through the population, pushing the gene pool toward an ideal equilibrium where every csd allele is equally common.

It’s an unusual case in which evolution has favored diversity over any one particular gene. Most evolutionary trends are typically studied over enormous time scales, so Gloag did not expect to see negative frequency-dependent selection unfold over the course of just one decade. “What surprised us is how quickly the effects of that selection are felt,” Gloag says. “Evolution can act fast—much faster than we often give it credit for.”

Salvaging the seven csd alleles was the Asian honeybee’s ticket to survival in Australia. By 2011, officials had shifted from an eradication program to a focus on containing and monitoring the invasive bees, says Gloag. “They were no longer under the illusion that they were going to get rid of them.”

Asian honeybees are harmless invaders on their own, but they are known to carry parasitic mites, Varroa destructor and Varroa jacobsoni, that wreak havoc on European honeybee populations. V. destructor was constrained to Asian honeybees until it jumped hosts to the European variety and spread across the globe with disastrous impact—and scientists believe V. jacobsoni may be poised to jump hosts too.

For now, Australia is one of the few places still free of V. destructor. “We’re pretty much the only holdout,” Gloag says, “but we’ve seen the damage it’s done to pollination services in other parts of the world, and we’re very worried.”

In the face of a looming ecological threat, Gloag finds a positive message in her team’s discovery: If the invasive bees could recover from what seemed like terminal genetic loss, then perhaps endangered species that have sustained similar losses could demonstrate similar resilience. Australia’s bee problem illustrates how species bounce back. “You can have healthy populations that have been through extreme bottlenecks,” she says. “Nature finds a way.”