Some beetle species may have evolved to tunnel into the ground to escape the pathogens that abound on dead and rotting animals.

Stacks of dead pigs line a freezer at the Department of Entomology at the Federal University of Viçosa, Brazil. In the past six years, lab technician Verônica Saraiva Fialho has been stockpiling the carcasses, which she procured from the university’s pig breeding farm. Around sunrise, she carts several of the bodies out to a nearby forest. Fialho, affectionately called “the Girl of Dead Pigs” by some of her friends, then leaves the pigs in the forest so she can study the beetles that eat and live on rotting flesh.

This gory work is a dream come true for Fialho. As a young girl, she used to walk in the forests near Teixeiras in Brazil with her grandfather. Whenever they came across dead animals on the ground—monkeys, dogs, anteaters—Fialho would stop, lift the carcass, and look for insects. The many kinds of ants, flies, and beetles she found there captivated...

Fialho was particularly impressed by the beetles, and she’s been studying them for several years now. Carrion-feeding beetles mostly belong to the subfamily Scarabaeinae —a group known collectively as the true dung beetles, although not all of its members feed on feces. In those species that specialize in scavenging dead flesh, adults home in on a fresh carcass and bite off small chunks of meat to feed their young in nests, which the beetles build in a variety of ways. So-called “dwellers” build their homes between carcasses and the soil; “rollers” roll the meat away to shallow nest; “tunnelers” dig nests directly under carcasses.

The behavioral diversity in these beetles is something of a mystery, but one theory is that at least some nesting strategies might help the insects avoid infection. While decomposing carcasses potentially harbor lots of microorganisms that can kill insects, scientists almost never find a beetle nest infected, suggesting that elaborate nesting behaviors such as tunneling might help mitigate the risks of feeding on and living near rotting flesh. Still, no researcher had explicitly tested the underlying assumption that insects on a carcass face high infection risks. Nobody, that is, until the Girl of Dead Pigs came along.

In 2016, as part of her PhD work at the Federal University of Viçosa, Fialho marshaled a rotating team of assistants—undergrads, colleagues, and, on occasion, her husband—and set out to examine the risk of infection for insects ingesting rotting meat. The team selected three sites in the forest, separated by at least 150 meters, and collected soil samples both on the soil surface and up to 70 cm underground. Then they placed a dead pig at each site and returned to collect soil in the same way 7 and 30 days later. A site without a pig carcass served as a control.

The work was equal parts hard labor and painstaking attention to detail. The team spent full days preparing materials: pots and tools to collect soil, labels to mark samples, and agar plates to cultivate bacteria and fungi. Field days meant heading out to the pigs at 6 AM, returning with all the bags of soil at 4 PM, and processing the samples until 2 AM the next day. Digging under each putrefying carcass required a strong back, and an even stronger stomach.  “The soil was very wet and smelled really bad,” says Fialho. She became used to the stench, she adds, but the rest of the team found it disgusting. 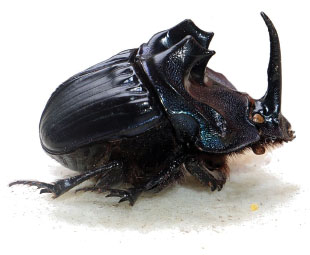 BEYOND DUNG: Though classified taxonomically as true dung beetles, many members of the Scarabaeinae subfamily, including this male Coprophanaeus (Megaphanaeus) bellicosus, feed on rotting flesh. VERÔNICA FIALHO

Back in the lab after each trip, Fialho isolated insect-pathogenic fungi and bacteria from the soil samples. She found that the densities of insect-killing pathogens in the soil around each carcass was highest on the seventh day of the experiment—when the carcass had decomposed into liquefied tissue and was packed with insects. Pathogen densities were consistently highest at the carcass, and decreased the deeper into the soil Fialho dug. However, horizontal distance from the carcass made little difference: pathogen densities were consistent in the topsoil over a radius of up to 120 cm.

Fialho also exposed larvae of the mealworm—a beetle that does not live in soil and is not expected to strongly resist soil pathogens—to the soil samples and monitored how long the insects survived. Larvae died fastest when exposed to soil collected on day seven from shallow depths, she found, lending support to the idea that decomposing carcasses present a high infection risk, particularly aboveground (Ecol Evol, doi:10.1002/ece3.3919, 2018).

The work required a strong back, and an even stronger stomach.

“[The study] is really nice. It shows that whilst moving horizontally from a carcass doesn’t affect the pathogenic risk greatly, moving vertically down does affect the risk,” says Sheena Cotter, an evolutionary ecologist at the University of Lincoln, U.K., who acted as a reviewer on Fialho’s paper. “That could explain why you get some insects tunneling, which is really interesting.” However, she adds that more work will be needed to make the jump from correlation to causation.

Ana Duarte, an evolutionary biologist at the University of Exeter’s campus in Cornwall, U.K., says Fialho’s study further unravels the complex influence that pathogens exert on beetles that exploit carcasses. Duarte, who has studied burying beetles, also emphasizes the need for experiments to show cause and effect. She suggests an experiment that changes pathogen levels at different soil depths to see if beetles dig deeper or shallower. But “I can totally understand that it’s very difficult to measure,” she says.

Getting a handle on these beetles’ behaviors is important for understanding larger-scale changes in the insects’ habitat, notes Cotter, who has discussed future collaborations with Fialho. Beetles that feed on dung and carrion disperse nutrients and affect soil properties, Cotter says. “The picture is much bigger than why are dung beetles tunneling.”

Now that she has completed her PhD program, Fialho has started experiments on other beetle species that visit her dead pigs, and is keen to spend more nights in the forest, when the insects are more active. “I have always wanted to work with these [carrion-feeding] beetles,” she says. “And now that I can, I just want to stay happy, study these things, and stay fascinated.”