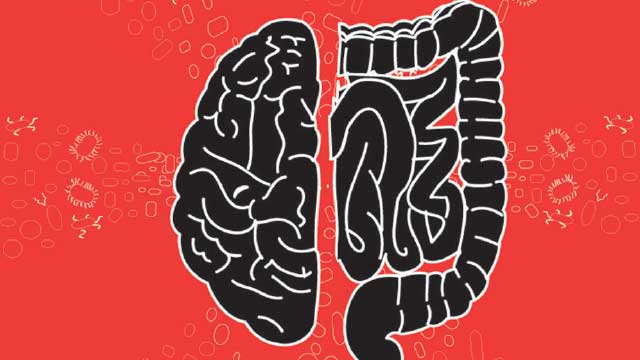 Stress, anxiety, and depression are emotions we all feel at some point in our lives, some people to a greater degree than others. Part of the human experience, right?

“It may seem odd that my research focuses on the gut if I’m interested in the brain,” says John Cryan, a researcher at the APC Microbiome Institute at University College Cork in Ireland. “But when we think of how we express emotion in language, through sayings like ‘butterflies in your tummy’ and ‘gut feeling,’ it isn’t surprising that they’re connected.”

In a recent study, Cryan and his colleagues reported a link between the microbiome and fear. By examining mice with and without gut bacteria, they discovered that the germ-free mice had blunted fear responses (Mol Psychiatr, doi:10.1038/mp.2017.100, 2017). Their findings may pave the way for the development of...

Researchers at Kyushu University in Japan were the first to show, in 2004, that bacteria in the gut can influence stress responses, prompting many subsequent investigations. Yet despite mounting research, scientists remain uncertain about exactly how the gut microbiome affects the brain. While some bacteria influence the brain through the vagus nerve, other strains seem to use different pathways. It is known, however, that the population of the gut microbiome begins in early life, and recent research suggests that disruptions to its normal development may influence future physical and mental health (Nat Commun, 6:7735, 2015).

Researchers are finding that this gut-brain connection could have clinical implications, as influencing the gut microbiome through diet may serve to ameliorate some psychiatric disorders. Together with University College Cork colleague Ted Dinan, Cryan coined the term “psychobiotics” in 2013 to describe live organisms that, when ingested, produce health benefits in patients with psychiatric illness. These include foods containing probiotics, live strains of gut-friendly bacteria.

While there are many rodent studies linking probiotics and mental health, UCLA biologist Emeran Mayer and his colleagues were the first to test them in humans, using functional magnetic resonance imaging (fMRI) scans to assess the results. After administering probiotic yogurt to a group of healthy women twice a day for four weeks, the researchers found that the women had a reduced brain response to negative images (Gastroenterology, 144:1394-401, 2013).

“We reanalysed the data several times and convinced ourselves that it’s real,” Mayer says. “You can almost say it was a career-changer for me.”

Having conducted this study on healthy participants, Mayer is reluctant to conclude that probiotics can cure mental illnesses such as anxiety. “It’s a complex emotion, not just a reflex behavior like in the mouse,” he says. However, Mayer says he’s very supportive of the potential of prebiotics—fiber-rich foods  that promote the growth of beneficial bacteria in the gut. 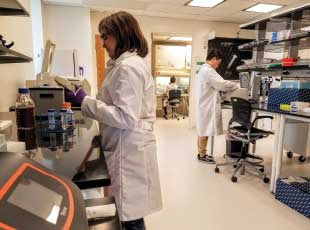 THE GUT FEELINGS LAB: Graduate students Liz Ziegler (left) and Haitao Wang (right), along with postdoc Holly Lutz (center), work in the University of Chicago lab of Jack Gilbert to disentangle the connections between the microbiome and the brain.MELISSA DSOUZA, UNIVERSITY OF CHICAGOResearchers at Deakin University in Australia recently trialed a Mediterranean-style diet, which is predominately plant-based and fiber-rich, in a group of adults with major depression. They found that one-third of the participants reported a significant improvement in symptoms after 12 weeks on the diet (BMC Medicine, 15:23, 2017). One of them was Sarah Keeble from Melbourne. “I’ve suffered from depression for 17 years. At the start of this study, I was right at the bottom of the barrel,” she recalls. “After a few weeks, that sinking feeling slowly lifted, and my motivation and enthusiasm improved.”

Just as activity in the gut seems to affect the brain, mental stress can lead to intestinal problems. Scientists have demonstrated this in research on irritable bowel syndrome. For example, a study by Mayer and colleagues linked early-life emotional trauma to an increased risk of developing the bowel disorder (Clin Gastroenterol Hepatol, 10:385-90, 2012).

As data on the brain-gut axis accumulates, many scientists are taking notice. Trinity College Dublin researcher Shane O’Mara says that there is “great potential” in this area, but cautions that it’s too early to say whether targeting the microbiome will play a role in psychiatric treatment. University of Manitoba gastroenterologist Charles Bernstein also feels the research is promising but believes we are “far from manipulating the microbiome to treat mental health disorders.”

Those spearheading this research are equally aware of the need for more studies, particularly in human subjects, but they are hopeful that change lies ahead. “I’m almost certain that in several years, diet will be considered one branch of therapy for many mental illnesses, alongside medication and psychiatric treatments,” says Mayer.

“People with severe mental illness will still need something very strong, but this is a useful adjunctive,” agrees Cryan. “I think when we go to our GP in future, we will not only have blood tests, we will have the microbiome tested.”

“Within five years, I hope to see more clinical trials that demonstrate the efficacy of prebiotics and probiotics on mental health disorders,” says University of Chicago microbial ecologist Jack Gilbert. “There needs to be a revolution in how we deal with mental illness in our society.”