PARTY TRICK: Dolphins are trained to tail walk in captivity. But until recently, it was very rare to see the behavior in wild animals.
MIKE BOSSLEY

Billie the Indo-Pacific bottlenose dolphin liked to walk on water. She’d pump her tail vigorously back and forth, forcing her entire body out of the water, so she’d skim backwards along the surface as if she were moonwalking.

Mike Bossley, a researcher at the wildlife charity Whale and Dolphin Conservation (WDC), was the first to observe Billie performing the trick; he caught her doing it in the bays and estuaries around Adelaide, Australia, in the 1990s and early 2000s. At the time, it was common to see trained dolphins tail walk in marine parks. But Billie was wild.

“Tail walking in wild dolphins is indeed rare,” says Janet Mann, a biologist at Georgetown University who studies dolphin behavior. “I have seen...

Bossley’s now interested in what the behavior reveals about how the animals learn from one another. Billie probably learned to tail walk during a brief stint in captivity, he says. She was born off the southern coast of Australia, then trapped in a polluted harbor near Adelaide in 1987 and taken to a dolphinarium. She was never trained to tail walk, but watched the five other dolphins there train for three weeks. She was then released back into the wild.

In 1995, Bossley spotted Billie tail-walking in Port River estuary, just north of Adelaide’s city center. “I was out in my red inflatable boat, and suddenly she appeared right beside the boat and did a tail walk circling around it only about 2 meters away,” he writes in an email to The Scientist. He was surprised to see Billie tail walking, he says, but didn’t realize the significance of the behavior at the time—that a cultural trend was emerging among wild bottlenose dolphins in the area.

That started to sink in as Bossley watched Billie tail walk multiple times over the next few years, and then spotted another wild dolphin, Wave, doing it too. “I became very excited when Wave started to tail walk as well because I then realized what was happening—the behavior was spreading through the dolphin community,” he says. Bossley wanted to document the behavior, so, that same year, he enlisted the help of citizen scientists. More than 30,000 hours of observation later, he and colleagues at WDC described 11 dolphins—six adult females and five juveniles of both sexes—doing the tail walk between 1995 and 2014 (Biol Lett 14:20180314, 2018). 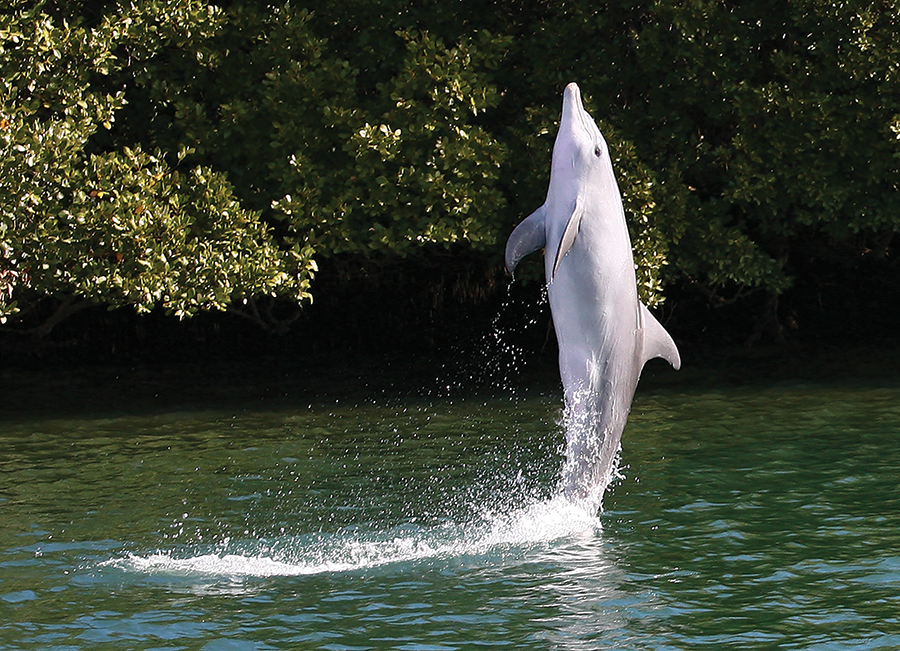 Among adult dolphins, “it is unclear why only females appear to tail walk, and again, why only some of the local females tail walk,” Bossley says. But the observations provide an example of the impressive imitative skills of dolphins in general. “Dolphins are excellent mimics, both physically and acoustically,” Mann says. The results support this concept and are “also consistent with the general finding that dolphins learn such behaviors when they are young.”

Based on the data, Bossley and his colleagues suggest in the paper that the mimicry illustrated by the spread of tail walking behavior might help researchers understand how wild bottlenose dolphins in the area have learned to adopt a range of foraging behaviors, from beating cuttlefish with their snouts to catching fish in conch shells.

Mann, however, says she’s not convinced by this argument because, unlike foraging behavior, the tail walk has no obvious biological function. “The context of tail walking was not reported in the study,” she says. “Was the dolphin alone, in a group? What happened before and after the tail walk?” To be absolutely sure of the function of the behavior, much more context for each occurrence is needed, she says. Perhaps then it could reveal clues about other learned behaviors.

One possible explanation is that the animals have adopted tail walking as a signal of some sort. “The behavior could be used to show other dolphins that the tail walker is exuberant or capable, which could serve as either a sexual signal or one to improve the group cohesion of the pod,” says Bernd Würsig, a behavioral ecologist who studies whales and dolphins at Texas A&M University at Galveston and was not involved in the study. That said, “I do not believe the authors have indications for these [signals] in this case.”

Bossley agrees that there’s no evidence in their study that the behavior provides fitness benefits to the animals. “I think the behavior is arbitrary because I am unable to detect any pattern to its performance. It is sometimes done when other dolphins are present, sometimes alone,” he says. “It sometimes [accompanies] a change in behavior, for example from foraging to traveling, and sometimes it does not.”

Why would wild dolphins learn to do this trick if there’s no biological benefit? “Fun,” Würsig suggests. “Dolphins do quite a bit for enjoyment.”

Whatever the role of tail walking in wild dolphins, it could serve a purpose in guiding conservation decisions. “The behaviour was not produced at high rates until decades after it was originally introduced, showing that anthropogenic impacts on behaviour can last for decades within populations,” Bossley and his colleagues write in the paper. Those anthropogenic impacts have to be taken into consideration when developing conservation strategies, they argue.

Nevertheless, this particular behavior is slowly disappearing from the wild population. Billie died in 2009, and according to the team’s observations, tail walking peaked right after that, in 2010 and 2011, with 62 sightings of the behavior each year. Then it tapered off. There were only 7 sightings in 2014—the same year Wave passed away.

The behavior, it seemed, was a fad. “What surprised me in the story,” Würsig says, “is how very long it took for [tail walking] to manifest, and that it had rather a short life.”