An undergraduate research project finds the animals are tuned in to reassuring information from other species.

It turns out that pulling a wagon laden with cat litter buckets and speakers around a small college town in the dead of winter can invite questions from strangers. When Oberlin College undergraduate Abby Parker explains to curious residents that she’s doing research on squirrels, she says, the response is often, “Squirrels? Plenty of those around here!”

Parker’s goal is to find out whether Eastern gray squirrels (Sciurus carolinensis) respond differently to the chatter of familiar North American birds than to unfamiliar species. Finding the answer will help identify what types of information the animals glean from other species’ utterances.

These squirrels are much more aware of their surroundings than I think most people would have given them credit for.

When Parker or one of the other students involved in the study finds a squirrel, they set up the two speakers 4 meters apart atop overturned Tidy Cat buckets at least 10 meters from their subject. They wait a minute to give the animal a chance to acclimate to the presence of the gear and its human operator, then record the animal’s activities for 30 seconds via a custom-made phone app. Next, they play a red-tailed hawk call through the speakers to put the squirrel on alert for a predator, and observe the animal’s behavior for another 30 seconds. Finally, they play one of another four sounds: ambient noise; the chatter of familiar, North American bird species; the chatter of Australian birds that the squirrels have presumably never heard before; or song from these same Australian bird species. They watch the squirrel carefully for another three minutes to see how it behaves. Does it groom itself? Forage? Perhaps most tellingly, how frequently does it look up from what it’s doing to check for predators?

The study, overseen by Oberlin biologist Keith Tarvin, is a follow-up to one conducted with his former student Marie Lilly, now a graduate student at San Francisco State University. Tarvin, Lilly, and another student found that after hearing a recorded hawk call, squirrels that subsequently heard the normal chatter of familiar bird species displayed fewer vigilance behaviors, such as freezing or looking up, than did squirrels that heard bird-free ambient noise.

Those findings, the authors wrote in their paper, suggest that the familiar chatter served as an auditory signal that the surroundings were safe again. Animals are known to be attuned to birds’ alarm calls, Lilly says, so it made sense they might also pay attention to normal chatter. Not only did the data bear that out, but “it was definitely a lot stronger of results than I was anticipating, which was really cool,” she says. 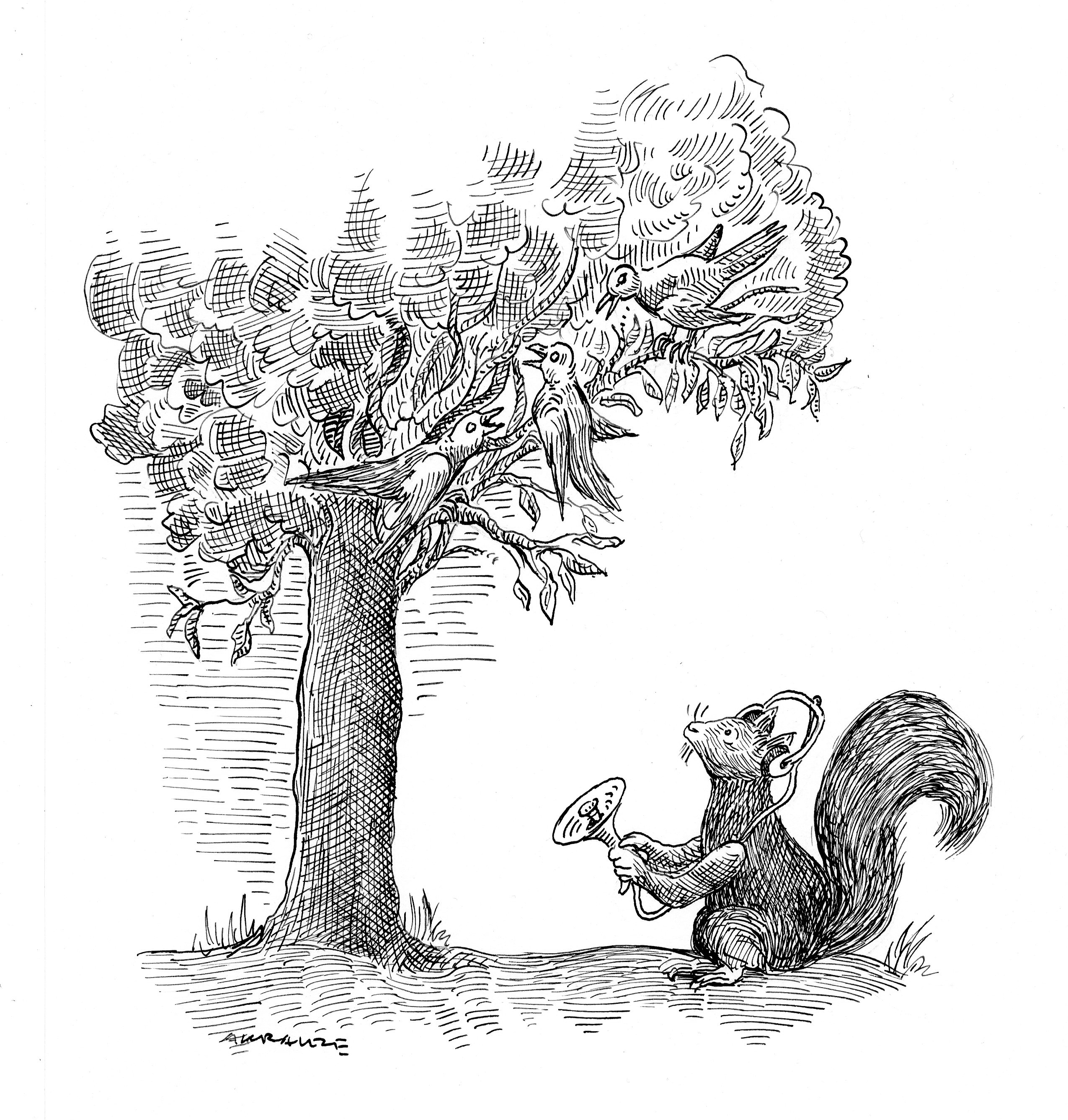 The question now, Tarvin says, is whether the squirrels are indiscriminate in their eavesdropping—that is, if they’ve learned “that the presence of a soft din of chips, chortles, buzzes, and the like tends to be associated with safety”—or if they are responding to the calls of specific species. “It certainly is possible that squirrels also learn to recognize and interpret a wide array of [non-alarm] calls from a host of disparate species, but that seems to require a whole lot of learning on the part of the squirrels, and a lot of processing too,” he notes. If they do devote this much brain power to bird calls, it could indicate that they’re gathering richer information than simply danger or safety. The current study is a step toward answering that question.

Tarvin’s other research projects have mainly been on the behavior of birds themselves. He only started studying squirrels after finding a squirrel observation activity in an instructor’s manual and using it in one of the courses he teaches. He later realized that, as wildlife that are abundant and acclimated to human presence in Oberlin, squirrels would be an ideal subject for undergraduate research projects on animal behavior.

Designing and conducting experiments on squirrels is no walk in the park, however. One abandoned experimental design involved playing a sound in an area with squirrels in the morning, then returning to observe their behavior later in the day (with the assumption that because squirrels have small territories, the animals present in the afternoon would likely have heard the sound in the morning). But it was rare to spot any squirrels at all on the follow-up trip, and on one of the few trials where Tarvin’s student did find one, a hawk swooped down and nabbed it just as the researcher was conducting his observation.

The fact that squirrels are indistinguishable from one another even for trained observers causes complications as well. To avoid observing the same animal twice, Parker and the two other students involved in the current study track the locations where they’ve played sounds on a shared Google map and avoid returning to those areas for trials for at least a few weeks. Trials are sometimes ruined because the animal under observation runs behind a tree and emerges with an identical companion or two.

While animal responses to alarm calls have been well-studied, the paper the group published last year is unusual in that it gets at the other side of those behaviors, says Erick Greene, a behavioral ecologist at the University of Montana who was not involved in the study. “One of the things that’s not been as clear . . . is how animals know that it’s okay to go back to sort of normal life,” he notes. “And this is an important point because if you, say, go back to foraging too early and there still is danger around, you could get nailed and get killed by a predator.” The authors of the 2019 study, he says, “really hit it out of the park and addressed a really interesting question that not many people have looked at.”

Mike Webster, who has collaborated with Tarvin in the past and now studies animal communication and behavior at the Cornell Lab of Ornithology, agrees that the results published so far are a valuable contribution to understanding how animals gather information from sound. “These squirrels are using this public information that’s available to them in the outside world in a way that we didn’t really understand before, and they’re much more aware of their surroundings than I think most people would have given them credit [for],” he says. One question the study raises, he notes, is: “Are other species doing the same thing?” And if so, is the behavior limited to mammals, or might birds, reptiles, and other taxa also rely on such public information to assess safety? Webster also wonders whether animals could derive different types of information—about suitable spots for foraging or nesting, for example—from other species’ auditory signals.

Unfortunately, the answers to such follow-up questions, including those posed by the group’s current study on Australian versus native bird sounds, will have to wait. In mid-March, the month after that study began, the Oberlin campus shut down due to the COVID-19 pandemic, sending students home for the rest of the semester. Given that the trees will have leafed out by summer, obscuring potential study subjects from view, Tarvin expects that the study won’t resume until winter sets in. “Abby took a set of gear home with her in hopes of being able to do some trials in Pennsylvania,” he writes in an email to The Scientist, “but given the transitions to online courses and other disruptions, I don’t know if she’ll have time to do much squirrel work.”