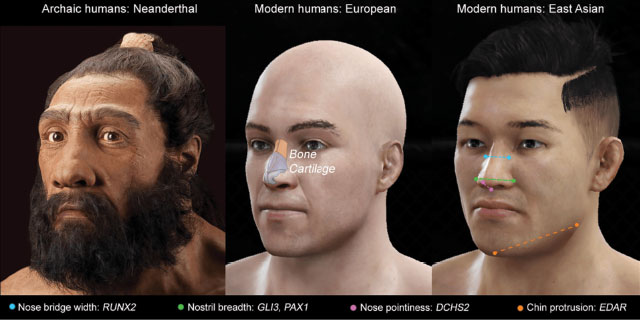 THE NOSE KNOWS: Nose shapes in human ancestors and different populations of modern humans are molded by genes and the environment.COURTESY OF KAUSTUBH ADHIKARI

Narrow, flat, hooked, button, straight, or none of the above, the human nose comes in myriad shapes and sizes. But no matter how noses look, they all share at least one common function: to warm and humidify air on its way to the lungs. Like a wind tunnel, the nasal passages cause turbulence in inspired air, allowing it to touch the inner walls of the nose and draw moisture and heat from our mucosa and blood vessels.

The shape of the human nose has been sculpted in part by climate. “A lot of it depends on the environment that your ancestors grew up in,” says Lauren Butaric, a biological anthropologist at Des Moines University. “What you see in the cartilaginous structure, which matches...

Butaric and her colleagues recently determined that in Alaskan Inuit and Siberian Buryat populations, a longer, narrower nasal cavity is associated with large maxillary sinuses, and in sub-Saharan African populations, the wider nasal cavity is accompanied by smaller maxillary sinuses (Am J Phys Anthropol, 160:483-97, 2016). The sinuses function as a sort of “buffer” to accommodate changes in the nasal cavity and other structures of the face, Butaric’s team concluded, both during an individual’s development and over evolutionary time.

The relationship between sinus and nasal cavity shape has historically created a paradox for anthropologists when it comes to archaic human species. “The sexy topic is Neanderthals,” says Butaric. Many scientists have assumed these ancient populations were more adapted to cold weather than Homo sapiens are, even those H. sapiens at high latitudes, because the Neanderthals were associated with colder and drier conditions during Earth’s glacial periods. Accordingly, a typical Neanderthal’s sinuses were thought to be larger than a modern-day human’s would be if the human was otherwise a similar size. However, instead of a long, narrow external nose structure, the Neanderthal face most likely had a relatively wide nose, judging from bone morphology.

“[Neanderthals] look like they should be adapted to being in warm and wet environments, not cold, dry ones,” says Todd Rae, an anthropologist at the University of Roehampton in the U.K. Delving into the internal facial structures, Rae and colleagues used CT scans to compare Neanderthal skulls to H. sapiens fossils from Lithuanian archaeological sites, testing the assumption that the Neanderthal sinuses were relatively larger. Their data showed that the Neanderthal sinuses were not, in fact, any larger than a human’s would be if the entire skull was scaled to the same size.

“That suggested to us that [Neanderthals were] not especially cold-adapted,” says Rae. Expanding this reasoning to the external nose, Rae hypothesized that the wide-nosed Neanderthal face wasn’t an adaptation to the cold at all, but was driven by some other underlying factor (J Hum Evol, 60:234-39, 2011).

Butaric suggests that the Neanderthals, with larger bodies and more muscle mass, might have needed larger noses to inhale appropriate amounts of oxygen, regardless of where they lived. In modern humans, males generally have larger noses and nasal passages than females do, which may be due to a higher oxygen demand (Am J Phys Anthropol, 160:52-61, 2016). Another possible explanation, Rae proposes, is that the Neanderthals may have simply avoided the extremely cold areas during times that would have provided enough selection pressure to mold their noses into a narrow shape.

In human evolution, weather isn’t everything, either. We’ve mostly shaped the world around us to avoid the selection pressure of extremely cold environments. Work on cranial morphology suggests that much of the skull variation in today’s human populations is explainable more by distance from Africa than by adaptation to the local environment (Am J Phys Anthropol, 141:76-82, 2010). “We think it might just be drift—that simply the further you get, the more a population will start to develop differences from copying errors in DNA,” says Rae. “You’re going to get the narrow nose in places where it’s really cold, but [also] where it’s relatively temperate; the differences are literally random.”

Although these nasal differences in temperate zones may not be driven by environmental variables, geographically related traits are still evident. “There is wide variation across continents, and that sort of tells you that there are underlying genetic reasons,” says Kaustubh Adhikari, a population geneticist at University College London. Adhikari and his colleagues recently published a paper exploring the genetic variations associated with differences in external nose shape (Nat Commun, 7:11616, 2016).

Earlier studies had uncovered a few genes that play a role in sculpting our noses, but much of the work was done in homogeneous European or North American populations with small morphological differences. Adhikari’s team, however, collected genetic samples and facial photographs from a cohort of more than 6,000 Latin Americans across five countries. “Latin America is a genetic melting pot,” explains Adhikari. “You have the Native Americans, who are close to East Asians; you have Europeans, and you have Africans—and you have all of these just on one continent. And the admixture is very recent.”

Adhikari and his colleagues detected five genes that controlled some aspect of nose structure. All five genes affect bone or cartilage differentiation and cranio-facial development, and three have previously been identified as differing between modern humans and extinct species such as Neanderthals and Denisovans—both of which had slightly different nose shapes than H. sapiens. “It’s not the complete story,” says Adhikari, “but it’s a little piece of it.”