ABOVE: Excavations on the Tibetan Plateau have revealed thousands of fragments of Paleolithic tools.
YINGSHUAI JIN

Even a seasoned mystery novelist might find it difficult to come up with a more tantalizing string of clues than those left by the Denisovans. Paleontologists found the only remains of the ancient hominin species in a Siberian cave in 2008. Yet a genetic analysis published early last year reported that, among modern-day human populations studied, the largest proportion of Denisovan-derived genes, about 5 percent, is found a watery hemisphere away—in residents of Oceania, in the South Pacific (Cell, 175:P53–61.E9). Another study found that a distinctive variant of the gene EPAS1 that helps Tibetans cope with high-altitude conditions is similar to an allele found in the Denisovan genome, and likely was acquired many millennia ago through interbreeding with the now-extinct species and spread through the population thanks to natural selection (...

In it, researchers with Beijing’s Institute of Vertebrate Paleontology and Paleoanthropology and their colleagues excavated an archaeological site 4,600 meters up on the Tibetan plateau, unearthing more than 3,000 stone tool fragments, most of them from double-sided blades, scattered through three layers of sediment. Using a technique called optically stimulated luminescence, which measures the photons emitted by minerals and can be used to estimate the last time sunlight reached a sample, the team calculated the age of the tools at between 30,000 and 40,000 years old. This suggested that the artifacts are far more ancient than what had previously been the oldest human settlement found on the higher, central part of the plateau, which was dated to around 7,400 years old (Science, 362:1049–51, 2018; Science, 355:64–67, 2017). 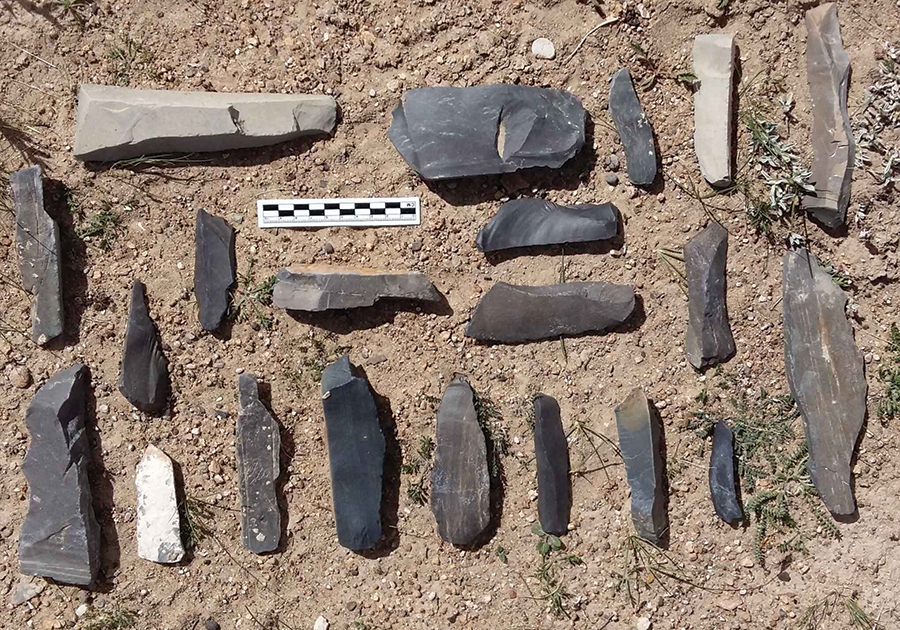 TIBETAN TOOLS: Most of the 3,000 fragments were from double-sided blades.
XING GAO

“[W]e did not initially expect to find archaeological evidence of humans in this high and challenging environment any earlier than the Last Glacial Maximum [LGM] of roughly 18–22,000 years ago,” notes John Olsen, an anthropologist at the University of Arizona and a member of the research team, in an email to The Scientist. “As the name implies, the LGM was a period of relative cold and aridity within the Pleistocene (Ice Age) and the common assumption was that initial human occupation of the high plateau must have occurred after the LGM . . . [but this] seems not to have been the case.”

In an opinion article published alongside the study, geochronologist Jia-Fu Zhang of Peking University and archaeologist Robin Dennell of the University of Exeter—neither of whom were involved in the research—note that the site, Nwya Devu, is near a ridge of black slate that would have provided the raw materials for the tools. “Because of the proximity of the site to a large source of flakable stone, the site is likely a workshop where tools were made that were then used on hunting expeditions at other locations,” Zhang and Dennell argue. Furthermore, they write, although no human remains were found at Nwya Devu, 40,000-year-old Homo sapiens remains have been found in a cave in northern China, suggesting that the people who made the tools were not Denisovans, Neanderthals, or another relative, but belonged to our species. Thus, the finding appears to push back the date of Homo sapiens presence in one of Earth’s harshest environments.

Yet the study raises more questions than it answers. For one, if the ancient blade-makers really were Homo sapiens, were they the ancestors of today’s Tibetans, or a people who later vanished from the plateau? Rasmus Nielsen, a geneticist at the University of California, Berkeley, who led the study that identified the Denisovan origins of EPAS1 but was not involved in the current study, says that work on ancient DNA indicates that two key altitude-coping genes did not come under selective pressure in the Tibetan genome until around 4,000 years ago, or even later, making it unlikely that Tibetans’ ancestors had settled at high altitudes many millennia before that. But without human remains at the site, “what these people were, and how they’re related to modern Tibetans . . . we don’t know about that,” he adds.

Olsen says the team plans to address this gap in the human fossil record; its members will continue their work at Nwya Devu and other sites on the plateau this summer. One question Olsen is especially interested in addressing is where the toolmakers came from. “The tools from Nwya Devu most closely resemble contemporaneous artifacts from Xinjiang (in northwest China), Mongolia, and southern Siberia in Russia,” he writes to The Scientist. “Is this pattern indicative of the directionality of the initial settlement of the Tibetan Plateau? We just don’t know the answer to that question yet, and it will require a much more robust sample size than one site located in the middle of such a large plateau.”

It’s also not clear whether early humans on the plateau settled there, or visited intermittently. Mark Aldenderfer, an archaeologist at the University of California, Merced, who was not involved in the study but has collaborated with Olsen in the past, says some archaeologists believe the plateau could only have been permanently occupied beginning around 5,200 years ago, once humans had agriculture to help sustain them (Science, 347:248–50, 2015). Aldenderfer has disputed this, arguing that archaeological evidence, and some currently available genetic evidence, points to permanent occupation of the plateau at sites more than 7,000 years old. For example, a 2013 analysis of Y-chromosome and mitochondrial DNA lineages in present-day Tibetans found evidence for two waves of migration to the area, with the first dated to about 30,000 years ago (Mol Biol Evol, 30:1761–78).

Humans would not have had much success sustaining pregnancies and establishing a long-term population atop the plateau unless they had genes to help them adapt—which is where Denisovans may or may not come in. Nielsen says that if Homo sapiens were braving the plateau as early as the new study suggests, they might even have interbred with Denisovans there, although he doesn’t consider that the most likely scenario. That’s because Denisovan alleles are also found in some other East Asian populations, suggesting they were acquired before the plateau’s colonization.

The authors of the paper suggest a different possibility, citing the similarity of the Nwya Devu tools to others found in Siberia, and the prevalence of Denisovan DNA in modern Melanesians: that the Tibetan Plateau might have been one area through which genetic traces of the Denisovans made their way south across the Homo sapiens population, conferring tolerance to high altitude along the way. Whoever the people at Nwya Devu were, Zhang and Dennell write, their discovery “provides a graphic example of how successful our species has been as a colonizing animal.”