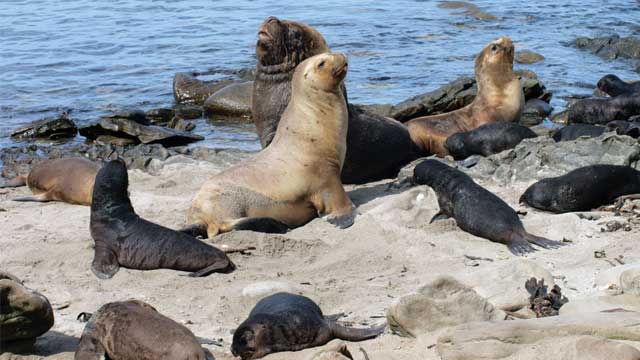 Seeing Sea Lions: Southern sea lions (Otaria flavescens) breeding at the Falkland Islands, where the population declined from 370,000+ animals in the 1930s to just 30,000 in 1965COURTESY OF ALASTAIR BAYLIS

“There is good reason to suppose that the sea lions of the Falklands can be exploited profitably, and that if due precautions are taken a sealing industry can be established on a permanent basis,” scientist James Hamilton wrote in 1934. He had traveled to the remote South Atlantic archipelago with a British scientific team in 1929 and spent three years observing the southern sea lion, Otaria flavescens, estimating population size. From 1933 to 1937, Hamilton and a small team of assistants recorded sea lion populations at 56 rocky, exposed rookeries by rushing at colonies from the water, causing frightened adults to stampede off while leaving the slower-moving pups behind to be counted. “The bite...

The sea lions were not surveyed again until 1965, when researchers counted only 5,506 pups, revealing a shocking decline. Yet no one sought to explain the drop for another 30 years, until Dave Thompson of the University of St. Andrews in the U.K. and colleagues decided to survey the sea lion populations of the Falklands again in 1995. At that point, the team found only about 2,000 pups. “[The results were] terrify­ing,” Thompson recalls. A second survey in 2002–’03 found a slightly higher number.

Thompson and his colleagues posited that hunting had caused the sharp decline between Hamilton’s initial surveys and 1965, both in the Falklands and off the Argentine mainland. (Legal hunting ended in 1966 and thus could not explain the later drop.) Now, a more recent study by another team of scientists suggests that hunting may not have been solely responsible for the decline.

Alastair Baylis of Deakin University in Australia and the South Atlantic Environmental Research Institute of the Falkland Islands and colleagues followed up with another population survey last year. Baylis arrived in the Falklands in 2008 as a fisheries observer, fresh from a PhD spent studying New Zealand fur seals in South Australia. “The Falklands is not only a stunning place in terms of scenery and just the abundance of species here,” Baylis says, “but because there’s so little research that’s been done on things like sea lions, it’s an opportunity to live out my childhood dreams” of being both a scientist and an explorer. He soon became interested in the sea lions and spent three weeks surveying roughly 800 kilometers of the Falkland Islands’ corrugated coastline to visit 70 scattered colonies. Baylis and his colleagues counted about 4,500 pups.

Next, Baylis’s team combed through hunting tallies from 1928 to 1966, which recorded a cull of 60,723 southern sea lions—93 percent of which were killed in the decade when Hamilton conducted his research. A mathematical model based on the new and historical population data suggests that even these staggering numbers could not account for the steep sea lion drop in the middle of the 20th century.

The new research also suggests hunting on the Argentine mainland is likely not to blame. Significant numbers of sea lions would have had to migrate to the mainland over the winter, but it was unknown if this actually occurred. In 2011, the scientists fitted 10 juveniles with GPS tracking devices to map their winter movements and found that the sea lions did not stray as far as Argentina, about 483 kilometers away. Given the new data, “the case for a hunt-related decline is less compelling,” Thompson says.

Instead, Baylis and his colleagues suggest that environmental changes could be the cause. The researchers found historical records indicating that sea-surface temperatures rose between the 1930s and the 1950s and between 1965 and 1980. Warmer waters could have disrupted food webs important to sea lions, possibly providing an explanation for the population drop, although there aren’t enough data to prove the hypothesis, Baylis says. “If the population has declined [due to] changes in ocean climate, then that really fundamentally alters how we interpret the resiliency and vulnerability of species,” he adds.

The available data on southern sea lions make them a “fabulous model” for other species like the Steller sea lion (Eumetopias jubatus) for which there is scant environmental evidence of nutritional stress caused by warmer seas, says Shannon Atkinson of the University of Alaska, Fairbanks. She says that Baylis’s research shows the harvest of animals most likely didn’t cause the decline, but Atkinson also believes the study didn’t find a definitive cause. “We’ve spent a lot of time looking for a smoking gun,” she says. “In reality, most populations don’t decline due to a single cause.”

Thompson agrees that “you would need to try to do more to tie the population change to the recorded environmental change.” To blame sea-surface temperature requires sea lion census numbers prior to the 1930s, Thompson says. Unfortunately, “there’s no species anywhere on the planet” for which such data exist.

The 30-year gaps in information about the Falklands populations of sea lions may constrain how definitively researchers can explain the marine mammal’s precipitous mid-century decline, but even being able to collect historical data that could potentially exonerate hunting as the primary cause of population decline is serendipitous for scientists. “The whole story . . . is only apparent because, by chance, there was a commercial interest in hunting sea lions,” Thompson says. The historical detail available to Baylis and his colleagues is something that many researchers wish they had access to, Atkinson adds. Most importantly, though, the research looks as much to the future as it does to the past. It’s “really nice [that] someone has taken on the population monitoring,” Thompson says.