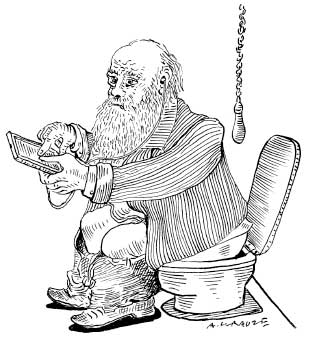 ANDRZEJ KRAUZE“My name is Charles Robert Darwin,” the bearded man on my phone’s screen says to me. “ I think I am most famous for establishing without a doubt that species change over time, and that they do this mostly by a process I discovered that I call natural selection, and that species are related to each other by a long history of common descent.”

The man speaking to me is not Charles Darwin, obviously, but he does look like him—right down to the hairdo. He’s got the distinctive hairless pate, and the dark gray hair on the sides of his head transitions smoothly into mutton-chop sideburns. He’s dressed in typical 19th-century British attire—a black suit with a white shirt, paired with a matching maroon vest and ascot—and he’s standing in a digital replica of Darwin’s office at Down House. He even sounds like the pioneering evolutionary...

“We need to introduce Darwin as a man, an individual who lived a life. That’s as much who he is as anything else,” says Duquesne University neuroscientist John Pollock, who has been planning this “synthetic interview” with Darwin for more than a decade.

In 2004, the Entertainment Technology Center at Carnegie Mellon University created a similar synthetic interview with Ben Franklin. “The very first day I saw Ben I was thinking we really should do this with Darwin,” says Pollock.

Visitors could ask Franklin any question they wanted, and if they asked nonsensical questions they’d get nonsensical answers. Pollock wanted to limit users’ experience to a reasonable conversation with Darwin—so he moderated their interactions. Pollock and his colleagues took to the streets of Pittsburgh to ask people what they would ask Charles Darwin. They also spoke with local teachers and kids at the Carnegie Science Center.

We need to introduce Darwin as a man, an individual who lived a life. That’s as much who he is as anything else.—John Pollock,
Duquesne University

The exercise confirmed to Pollock that the project was worthwhile. “What saddened me and shocked me—about half the people said, ‘Who are you talking about?’ By not showing the picture of old man Darwin, by not saying Darwin in the context of evolution, people had no idea who we were talking about.”

The researchers added a few additional questions themselves—“questions we knew people should be asking,” Pollock says—and whittled the list down to 199 queries grouped into 10 categories.

Pollock’s Duquesne colleague David Lampe then scripted the answers, relying heavily on Darwin’s own writings. As luck would have it, the Darwin Correspondence Project had recently made more than 1,000 of Darwin’s letters available online. “Because he was a prolific writer of letters and kept everything, and they had just gone online, we could answer every single question in Darwin’s own words,” Pollock says. Of course, he added, “Darwin was long-winded, so we had to sound-bite him a little.”

After the script was vetted by three Darwin historians, Pollock’s team put out a call for auditions. Pittsburgh local Kovitz landed the role. The Darwin Synthetic Interview debuted on February 12, 2009—Darwin’s 200th birthday and the 150th anniversary of the publication of On the Origin of Species—at the Carnegie Science Center and is now used in all Pittsburgh public middle schools. “[It can get] kids, or anyone really, to identify with Darwin as a person . . . which can make it more interesting and easy to learn,” says science educator Kirsten Sanford, producer and host of This Week in Science podcast and radio show.

The “interview” was so popular that Pollock wanted to make it more broadly available, but at 4.5 gigabytes, the videos were not amendable to streaming. Pollock decided to enlist the help of Carnegie Mellon professor Jessica Trybus, who had worked on the Ben Franklin synthetic interview and had since spun out the company Simcoach Games, which specializes in making interactive educational programs. Trybus and her team of engineers worked to pare the software down and make it mobile-friendly, and last August the Charles Darwin Synthetic Interview was released as an app for iPhones and Androids.

“[This] will make it more available to more people on their own time,” says Sanford. “Anyone can access this information and learn about Darwin.” She does wish that users could craft their own questions to Darwin, though. “By forcing students to think a particular way and ask very particular questions, you’re really limiting their actual interest in the process.”

“There’s a lot you can do with the nascent idea of synthetic interview,” says Trybus. “It’s a way to immerse people in living history.”