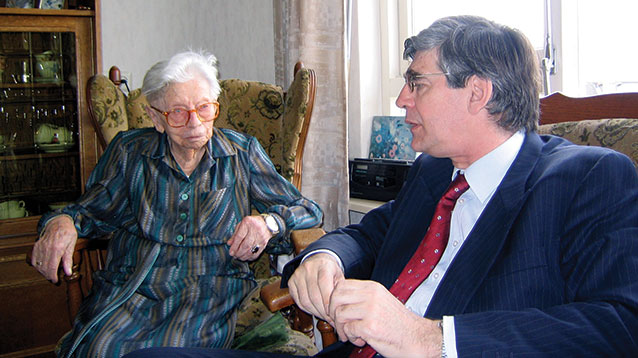 In the 1970s, Hendrikje van Andel-Schipper, an elderly woman in the Netherlands, made the decision to donate her body to science after her death. She was in her 80s then and probably figured it wouldn’t be long before she would be able to deliver on her promise. But 30 years later, in the early 2000s, she was still going strong.

Wondering if she was of any use to science at the ripe old age of 111, she called up the nearby University of Groningen, and the message got passed around to neuroscientist Gert Holstege, who says he gets the question a handful of times a year, most often when a person who’s donated her body to science becomes ill. When he found out that van Andel-Schipper was not only healthy, but that she...

Holstege arranged to meet with van Andel-Schipper in the retirement home where she lived, and he was immediately struck by her awareness and intelligence. “She knew exactly what was going on in politics, in sports,” recalls Holstege, now retired in the Netherlands but with a virtual position at the University of Queensland in Australia. “She could explain [to] me exactly what happened in 1898 when Wilhelmina became queen [of the Netherlands].” He remembers her detailed analysis of her favorite soccer team, Ajax Amsterdam, and her prediction that the team was not going to be successful due to weakness on the left side. She also described parties she’d gone to with Dutch soldiers as World War I began in 1914 and her marriage to a divorced man in 1939, a union that her mother did not approve of, Holstege says. “She was completely alert.”

No one was going to believe that a person her age was so lucid without some proof, he figured, so he went back just a few months later to test van Andel-Schipper’s impressive cognitive abilities. Remember 10 words for 10 minutes? No problem, Holstege says.

Holstege’s tests estimated van Andel-Schipper’s cognitive abilities to be comparable with a healthy adult half her age. A year and a half later, Holstege went back. And once again, the 113-year-old’s mind proved to be positively youthful, though Holstege did notice she had a bit less energy.

Around 7:30 p.m. the night of August 29, 2005, Holstege got a call from the retirement home informing him that van Andel-Schipper might not make it through the night. Shortly after, she died at age 115. At the time of her death, she had been the oldest person in the world for more than a year.

Her corpse arrived at the university before dawn. “And when we did the autopsy, it was immediately clear: it was stomach cancer,” he says. Holstege wondered what would have become of van Andel-Schipper if she had received treatment. She had survived breast cancer at age 100. If she could have overcome her stomach cancer as well, how long would she have lived?

Only a few hundred people on record have lived to see their 110th birthday. As one of this elite class, van Andel-Schipper is a biological curiosity, and her body a potential source of novel answers about aging and dying. Holstege had always been fascinated by her brain; now he got to explore it. Amazingly, he found almost no beta-amyloid plaques and few neurofibrillary tangles (Neurobiol Aging, 29:1127-32, 2008). “The brain was totally normal,” Holstege says.

The way the mutations were distributed over all the blood cells, it could only mean they were parented by two blood stem cells.—Henne Holstege,
VU University Medical Center

She also had extremely little atherosclerosis, “almost none,” says Holstege. “So she had a very good blood supply to the brain. This might be one of the reasons that she became so old.”

More recently, Gert Holstege’s daughter, geneticist Henne Holstege of VU University Medical Center in Amsterdam, took a closer look at van Andel-Schipper’s blood. She and her colleagues scanned the genomes of the supercentenarian’s white blood cells and found something they hadn’t expected: the vast majority of the cells had apparently descended from just two hematopoietic stem cells. “The way the mutations were distributed over all the blood cells, it could only mean they were parented by two blood stem cells,” explains Henne Holstege (Genome Res, doi:10.1101/gr.162131.113, 2014).

The geneticist didn’t know it was possible for a person to survive with just two hematopoietic stem cells, which give rise to crucial immune cells, including macrophages, neutrophils, dendritic cells, T cells, B cells, natural killer cells, and more. The homogeneity of van Andel-Schipper’s blood cells at the time of her death is an indication that the woman’s stem cell population must have decreased over her lifetime, Henne Holstege says. She is currently working to recruit clear-minded centenarians at the VU hospital to donate their blood and, eventually, their brains, to determine whether this is a universal phenomenon.

But was van Andel-Schipper’s cancer in any way attributable to her reduced number of blood stem cells? It’s likely that precancerous transformations happen in cells through a lifetime, says clinical immunologist Roberto Paganelli from the Gabriele d’Annunzio University of Chieti-Pescara. “And it’s only our immune system which prevents them from expanding and taking over.” Perhaps by the time one reaches 115 years of age, he says, these immune cells may become limited in number and function. Though he’s never studied samples from van Andel-Schipper, Paganelli’s own work has revealed that the blood stem cells of two centenarians seem to have preserved an ability to generate all blood lineages, but some of the cells produced comparatively more lymphocyte progenitors than other blood-derived cell types, despite the known decrease of lymphocytes in peripheral blood of aged people (Eur J Immunol, 26:2030-34, 1996). “This was a hint that during aging there is a shift to lose complexity in the system and to enrich for a single entity,” he says.

More work is needed to understand exactly how the immune system ages with us, but with a small percentage of the population living into their 100s, sample sizes are limited. Perhaps van Andel-Schipper’s corporeal gift to science will serve as an example for other long-lived people, says Paganelli. “The fact that the person was 115 years [and donated her] body and tissues to be explored by scientists is a very, very encouraging thing. I think this should be commended.”