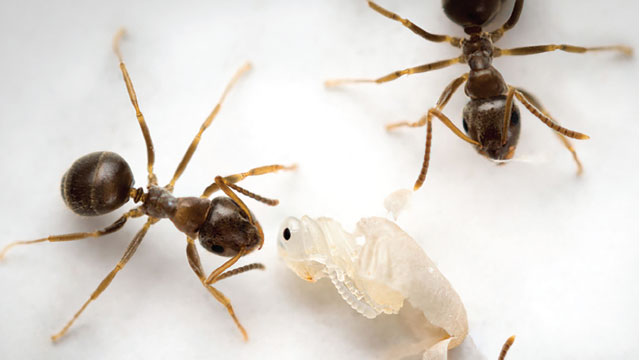 BUG SPRAY: Worker ants tear apart and spray acid on a pupa in an act of destructive disinfection.CHRIS PULL

In a petri dish, three Lasius neglectus worker ants surround a cocooned pupa from their own colony’s brood. Tearing into it with their mandibles, the ants remove the pupa from the cocoon, perforate its cuticle, and rip its body apart, dividing it between them. Finally, the workers apply formic acid from their mouths to the eviscerated pupa, leaving behind a heap of crumpled remains.

This is no random act of violence. According to Chris Pull, an evolutionary biologist at Royal Holloway, University of London, these ants were engaging in destructive disinfection, killing the pupa along with the ant-killing fungus, Metarhizium brunneum, that had infected it. The behavior evolved in social insects such as ants, honeybees, and termites to protect colonies from infected individuals, says Pull, with workers...

But just how the ants know which juveniles to kill, and which to spare, has been tricky to nail down. “We have all long wondered how ants can be so effective at their hygienic behavior,” says Simon Tragust, a zoologist at Martin Luther University in Germany. Tragust researches how ants use antimicrobial secretions such as formic acid as a sort of disinfectant for the colony. Separately from Pull’s group, he has reported finding L. neglectus worker ants grooming and spreading formic acid orally on pupae inoculated with Metarhizium, but he didn’t identify how workers were choosing their targets (Curr Biol, 23:76-82, 2013).

I was shocked by how efficient they were.—Chris Pull, Royal Holloway,
University of London

In 2012, as part of a PhD at the Institute of Science and Technology, Austria, Pull, along with graduate advisor and evolutionary biologist Sylvia Cremer, set out to get to the bottom of the mystery. After collecting thousands of ants, along with their queens and brood, from a supercolony of L. neglectus residing in northeastern Spain, Pull, Cremer, and colleagues exposed ant pupae in the lab to one of three dosages of fungal spores, or to water as a control. Then, they dropped worker ants into petri dishes with the pupae, and filmed their behavior. The ants were ruthless and effective: they reliably unpacked and disinfected pupae that had been exposed to the pathogen, while mostly leaving controls alone. “I was shocked by how efficient they were at preventing the fungus from growing,” Pull says.

The team also noticed that workers were destroying infected pupae while the fungal infection was still in its incubation period, before it had become visible or contagious. Something other than the infectious agent was telling the workers that the ants were sick. Pull and his colleagues knew that ants communicate with their nestmates via chemical compounds called cuticular hydrocarbons (CHCs), and suspected that the infected pupae might be signaling workers in this manner.

To test the hypothesis, the researchers washed some of the infected pupae with a solvent to remove CHCs. Presented with these pupae, the worker ants carried out their disinfection routine 72 percent less often than when they were given infected pupae that were unwashed or had been rinsed with water. The researchers then used gas chromatography to confirm that infected pupae that hadn’t been solvent treated had a unique chemical profile on their cuticles—a kind of “find-me/eat-me” signal, Pull notes, functionally similar to those released by apoptotic cells to attract phagocytic immune cells in the human body (eLife, 7:e32073, 2018).

While this sickness cue usually leads to the death of the infected individual by stimulating disinfection behavior in workers, it protects the rest of the colony, including egg-producing queens, from fatal infection, Pull says. “[The sick ants] are performing these behaviors and putting themselves at risk, but at the end of the day it’s still to maximize genes which they carry, to ensure that genes they carry are being passed on to the next generation.”

Provided the colony’s queen survives to pass on her genes, the evolutionary fitness of every individual is maximized, explains Cremer. “In systems like this, selection acts on the level of the reproductive entity,” favoring the evolution of collective defenses or “social immunity.” The kind of altruistic chemical cues discovered by the team “could be very widespread” among social insects, Cremer adds. The CHCs that make up the “disinfect-me” signal for L. neglectus are upregulated not only in ants during fungal infection, but also in honeybees—which have similar colony dynamics—after viral infection or when injected with bits of bacterial cells, she notes.

Laurent Keller, a myrmecologist at the University of Lausanne who was not involved in the study, says the kind of altruism shown by the infected pupae in this study is not unlike that of a honeybee who will “sting another organism and give its life for the colony.” But not all actions in social insect colonies are completely altruistic, he observes. He adds that he would like to hear more from Pull’s team about how the signaling behavior initially began to evolve in ants. “That could be quite interesting,” he says. “I think it’s not an easy question.”

Pull says he’s now interested in examining destructive disinfection behaviors at the colony level. “Most of these experiments on disease defense in social insects are done in the lab, and we don’t have a good idea of how they work in a whole colony,” he says. He’s curious to discover whether the speed of disinfection is linked to overall colony success, for example. “It would be really cool to look at how these behaviors scale up when you have a whole colony present.”