A study of bumble bees exposed to levels of radiation equivalent to those existing in Chernobyl hotspots shows that the insects’ reproduction takes a hit.

ABOVE: GETTING A BUZZ: Researchers studied how radiation might affect bumble bees like this one at Chernobyl.
COURTESY OF KATHERINE RAINES

A few years ago, on one of her first visits to Chernobyl, Katherine Raines went to the Red Forest, a radioactive cemetery of pine trees scorched by the nuclear accident in 1986. She was curious to see if there were bees living in the area. Research on the effect of chronic exposure to ionizing radiation on insects is limited, and some of the findings are controversial, but most experts support the idea that bees and other invertebrates are relatively resilient to radioactive stress.

Raines, a radioecologist at the University of Stirling in Scotland, didn’t spend long in that forest. In one spot there, her personal radiation dosimeter measured an environmental level of ionizing radiation of 200 microsieverts (µSv) per hour; more than a few hours of that exposure could have increased her cancer risk. But even during that brief visit, she did see bees. Whether they were living there or just visiting, Raines says, is hard to tell.

Bumble bee colonies experienc­ing just 100 μGy per hour had reduced their production of queens by almost half.

Back in the UK, Raines and colleagues recreated the same levels of radiation in a specialized facility. Boxes each containing a bumble bee colony made up of a queen, workers, and brood were placed at different distances from a radiation source, creating a gradient where bees in each box received a fairly steady dose of between 20 and 3,000 micrograys (µGy) per hour. (The two kinds of units, sieverts and grays, are essentially equivalent measures of the amount of exposure to radiation; sieverts factor in the type of radiation and account for the sensitivity of the exposed tissue. Bees at the site Raines visited in the Red Forest would experience around 200 µGy per hour.) The bees stayed in their artificial homes for four weeks before being moved outdoors into the university gardens for around one month, until the colonies were no longer viable—that is, once the queen had died and only a few workers remained.

The limited lab studies previously carried out by other groups had suggested that bees and other insects should be safe below 400 µGy per hour. So, Raines says, she was shocked when she found that even those colonies exposed to lower rates showed signs of a negative effect of radiation, especially on reproduction. Bumble bee colonies experiencing just 100 µGy per hour, for example, had reduced their production of queens by almost half, dramatically impairing the chances of successfully founding new colonies. According to the study, the overall effect was stronger than the one-fourth reduction observed in colonies exposed to a popular pesticide.

This work “sheds new light on the importance of chronic low-dose radiation exposure in a nonmodel species [with] profound relevance for the natural world,” says Timothy Mousseau, an ecological geneticist at the University of South Carolina who was not involved in this research. But he adds that it is hard to determine how some of these results, based on experimental manipulations in an artificial setting, can translate “to what’s actually going on in Chernobyl” for these important pollinators.

Mousseau and his colleague Anders Pape Møller (now at CNRS in France) have been doing field studies since 2000 to assess the abundance of wildlife populations living in the Chernobyl Exclusion Zone (CEZ), a 2,600 square-kilometer area surrounding the nuclear power plant. Their results have shown a negative correlation between radiation levels—which vary a great deal within the zone—and wildlife abundance. Insects were no exception: the team observed fewer bumble bees in the most contaminated areas, a relationship that held even within a range of extremely low radiation levels (from 0.01 to 1 µGy per hour). 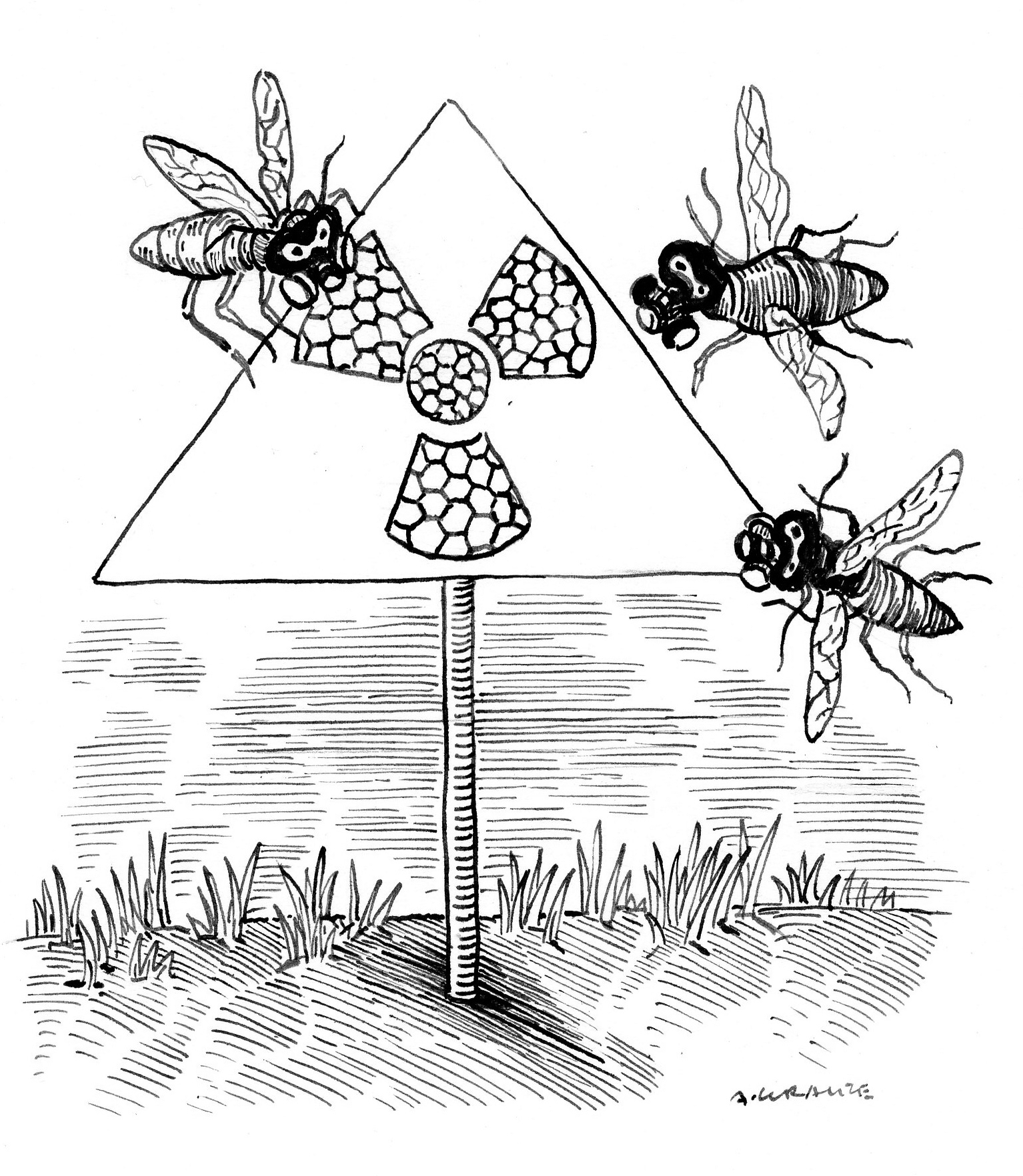 Those studies have been criticized, partly over the accuracy of their estimations of radiation levels. Mousseau and Møller have collaborated with some of their critics to reanalyze some of their data, and maintain that there has been wildlife reduction in the CEZ due to radiation. But Jim Smith, an environmental scientist at the University of Portsmouth in the UK, is one of several scientists who still has doubts about the studies, telling The Scientist that the observations don’t align with findings from other surveys in the region. For example, Smith, who has been visiting Chernobyl since the 1990s but is not involved in Raines’s or Mousseau’s work, failed to find evidence that either the abundance or the diversity of aquatic insects and other macroinvertebrates was reduced by radiation in any of the eight natural lakes that he and his colleagues analyzed in the CEZ in 2011, despite measuring external dose rates of between 0.1 and 30 µGy per hour.

Smith—who, along with Raines, belongs to a UK research program partially funded by the Environment Agency and its safe disposal contractor, Radioactive Waste Management—says that Raines’s bee study provides “interesting new data on a species that hasn’t really been studied [and] that is potentially more radio-sensitive than we thought.” But he is skeptical about the wider relevance of studying the effect of radiation levels rarely encountered in nature. Chernobyl’s radiation levels are a consequence of “the worst nuclear accident in history,” he says. And even within the CEZ, very few spots reach the radiation levels explored in this paper.

Raines says that although she did not detect any negative effect in colonies exposed to less than 50 µGy per hour—close to 200 times what humans experience, on average, from natural radiation sources—she didn’t have enough colonies at that level to conclude that bumble bees are unaffected. Her team had not designed its experiment to explore bees’ responses to such low levels, having assumed they wouldn’t see any effects below 400 µGy per hour. “I wish I had placed more colonies at lower dose rates,” she says. She’d like to understand, for instance, how radioactive discharges from hospitals—which can fall in the realm of 5–10 µGy per hour in some areas in the UK, Raines says—might affect wildlife. “What is happening at those really low, but above-background, levels is definitely important.”

Researchers who spoke to The Scientist about the study agree that further work is needed to conclusively demonstrate the effects of radiation on bumble bees. “Robust data on effects of radiations on wildlife are scarce, so it is important to perform these kinds of experiments to improve our knowledge in this particular field,” Béatrice Gagnaire, an ecotoxicologist at the Institute for Radiological Protection and Nuclear Safety in France who did not participate in this study, writes in an email to The Scientist. “To my opinion, this kind of study should be firstly repeated, and if the experts reach a consensus on data robustness, they could be integrated in the revised statements,” for instance, by the International Commission on Radiological Protection, an advisory committee whose recommendations for radiation safety inform regulatory authorities worldwide.

Raines is now gathering more data. The next stage of her research, she says, will be to look at the interaction between parasite load, which reduces longevity, and radiation exposure—both in lab-kept bees and in bees she sampled on one of her visits to deserted agricultural land around Chernobyl. “It would be ideal to directly relate lab and field [data].”