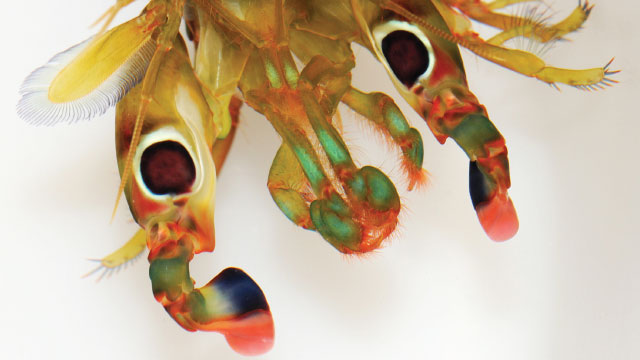 Mantis shrimps are not the easiest animals to work with, as neuroanatomist Nicholas Strausfeld knows firsthand. Not least, there’s the challenge of capturing the crustaceans in the wild. Also known as stomatopods, mantis shrimps live in burrows in shallow seawater and have earned the descriptive nickname “thumb splitters,” thanks to their tendency to use their sharp, powerful claws to slash at prey and pursuers.

“At low tide, you wade around and you try and catch these things,” says Strausfeld, who has plenty of experience chasing after the purple-spotted mantis shrimp (Gonodactylus smithii) with a small handheld net in the tropical waters around Lizard Island, Australia. “They’re incredibly fast—it’s very difficult.”

For Strausfeld and other neurobiologists, however, all the...

“We knew [these shrimps] were very interesting,” says neuroanatomist Gabriella Wolff, previously a PhD student in Strausfeld’s lab at the University of Arizona and now a research associate at the University of Washington in Seattle. In addition to a complex visual system that receives inputs from independently moving eyes, “mantis shrimps have very advanced behaviors that we haven’t necessarily seen in other crustaceans so far.” Research has also suggested they are sophisticated navigators, regularly finding their way home from distant feeding sites. Plus, they recognize other individual mantis shrimps, and remember whether their interactions were confrontational or not.

In 2016, Wolff revisited Strausfeld’s lab for a summer project to explore the structure of mantis shrimp brains. “We weren’t really sure what we were going to find,” she says. Almost immediately, however, the pair discovered something that was wholly unexpected: a mushroom body—a key neural structure most famously associated with visual and olfactory learning and memory in insects. “It was a huge surprise,” says Wolff, noting that the two lineages are separated by hundreds of millions of years of evolution. “We were really excited because we’d never seen a mushroom body so much like an insect’s mushroom body anywhere outside of insects, especially not in crustaceans.”

To learn more about the similarities between the structures in these disparate taxa, Wolff, Strausfeld, and collaborators drew up a list of 13 traits to describe the insect-type neural mushroom body in detail, ranging from the presence of particular fibers and cell clusters to the expression of certain insect proteins involved in learning and memory. Then, the researchers painstakingly worked their way through brains of mantis shrimps, model insects such as Drosophila, and a handful of other insect and crustacean species, cataloging the traits. 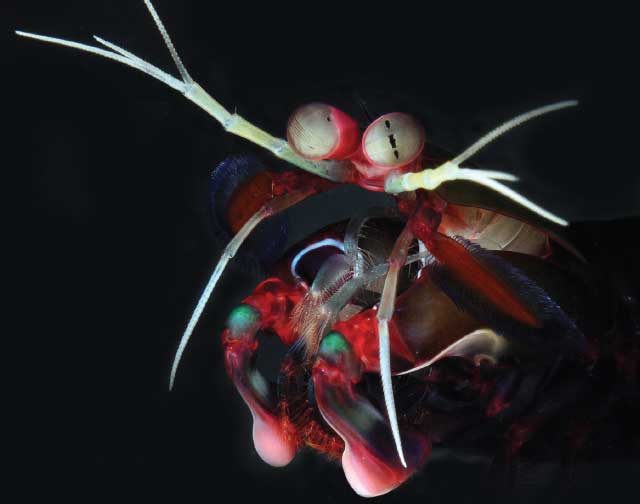 “We asked, how many of these traits are present in the stomatopod?” says Strausfeld. “And they all are. That was pretty exciting.” The team concluded that mantis shrimps possess a mushroom body that is essentially equivalent to the one found in insects (eLife, 6:e29889, 2017).

Strausfeld and Wolff are not alone in their excitement. Wake Forest University neurobiologist Susan Fahrbach, who studies the neuroanatomy of social insects such as honeybees, remembers her reaction on reading the paper for the first time. “My jaw just dropped,” she says. Looking at one figure in the paper that illustrated a mushroom body feature called the microglomeruli, “if you didn’t tell me I was looking at a mantis shrimp, I could have been looking at a honeybee brain,” she says. “I had that feeling of, ‘Wow, that’s what I study—only it’s in a shrimp.’”

The unexpected presence of this structure in a crustacean lineage raises the question of where the mantis shrimp mushroom body came from. One possibility, which the authors explore in their paper, is that the feature was present in an ancestor of both insects and crustaceans, and was subsequently lost from crustacean lineages that didn’t make use of it. “There are spectacular losses in certain lineages,” says Fahrbach. “It’s certainly not an outlandish suggestion.”

Possible support for that view comes from the researchers’ discovery of mushroom body–like structures in three other crustacean groups known for complex behavior. The groups, which might have retained some parts of an ancestral mushroom body, include the pistol shrimps, the only crustaceans to have evolved eusociality; the cleaner shrimps, which nibble parasites off larger animals at marine “cleaning stations”; and the semi-social land hermit crabs. “Like the stomatopods, [these animals] know where they are,” Strausfeld says. “They visit the same places for various tasks.”

For now, however, the evidence is primarily “circumstantial,” notes Tom Cronin, a biologist at the University of Maryland, Baltimore County, who studies arthropod vision. “There are a lot of things that tie all this together, and I think they made a really strong case.” But, he adds, to say with certainty that the trait has been conserved between insects and stomatopods, and is not instead a particularly impressive example of convergent evolution, “you’d like to see a transcriptomic analysis to know whether it has the same molecular profile.”

Strausfeld says he is keen to carry out exactly that analysis. He and Wolff are hoping to secure funding for a transcriptomic screen of mantis shrimp and insect brains, to search for signs of common ancestry. “That would be the final arbiter to tell us whether these extraordinarily similar centers are in fact homologous or not,” Strausfeld says, adding that either way, the structure discovered in mantis shrimps offers a new window into the biology of arthropod brains. “Even if it’s convergent evolution, that would be absolutely fascinating, right?”