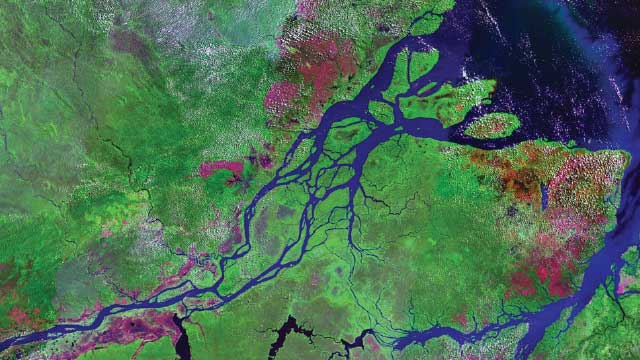 AMAZONION SURPRISE: A large coral reef beneath the murky plume of water flowing from the Amazon into the Atlantic OceanJESSE ALLEN AND ROBERT SIMMON/WIKIMEDIA COMMONS

In 2012, Fabiano Thompson boarded the US Navy research vessel Atlantis and set out into the Atlantic Ocean. He and his colleagues were aiming for a patch of water off the coast of Brazil about 80 to 180 kilometers from the mouth of the Amazon River. Their mission: to find a previously unexplored reef system located in the unlikeliest of places.

“If you look at textbooks, they say that reefs do not form at large river mouths such as the Amazon,” says Thompson, a microbiologist at the Federal University of Rio de Janeiro in Brazil. “We’re talking about a river that is exporting over 300,000 cubic meters of water per second into the ocean.” Large volumes of muddy freshwater—according to accepted wisdom—disrupt the...

But Thompson, along with Carlos Rezende of the State University of Northern Rio de Janeiro and colleagues in Brazil and the U.S., had reason to believe the textbooks were wrong. “We had two leads to base our research on,” Thompson says. “The first was a study published in 1977, describing the presence of fish and sponges at the mouth of the Amazon River. The second was a publication from 1999 . . . reporting the presence of corals.”

During the 2012 expedition, and a subsequent trip in 2014, the team deployed a barrage of equipment, including a multi-beam echosounder to map the ocean floor—30 meters to 120 meters down—coring machines to remove samples, and trawl nets to collect larger animals. Earlier this year, they reported their findings: a 9,500 square kilometer carbonate reef system, spread along a 50-kilometer by 1,000-kilometer corridor parallel to the coast. The reef comprises mostly rhodoliths and sponges, the team found, and supports a bustling community of fish and crustaceans, all thriving beneath the murky plume of the Amazon River (Sci Adv, 2:e1501252, 2016).

Despite the inevitable astonishment that met this discovery, the fact that the Amazon reef has remained “hidden from view” until now is perhaps not so surprising, says marine biologist J. Murray Roberts of Heriot Watt University in the U.K. “We know very little about what’s at the bottom of the ocean, even in areas that are relatively well studied like the Amazon river basin,” he says. Until the 1990s, it was generally accepted that reefs—particularly those built by corals—were restricted to shallow warm water with high light penetration. Indeed, such reefs, which Roberts refers to as “the ones we see on our holidays,” have traditionally been the main focus of research. But perspectives have been evolving as technology has taken science deeper into the world’s oceans.

In that “twilight zone,” as it’s known, I think the more we explore the more we’re going to find long stretches of these mesophotic reefs all over the world.—Andrea Quattrini,
Harvey Mudd College

“Practically, it’s got easier,” says marine geoscientist Veerle Huvenne, whose work involves mapping complex deep-sea habitats with the U.K.’s National Oceanography Centre. Along with echosounders like the one Atlantis used to map the topology of the ocean floor, “we also have robotic vehicles that we can send down to the seabed that allow us to have a much closer inspection of those reefs,” she explains.

Tethered remote operated vehicles (ROVs), for example, allow researchers to explore environments from the safety of a research vessel using a hand-held controller. And free-swimming autonomous underwater vehicles (AUVs) following preprogrammed routes can cover large areas to survey potential reef locations. “First it’s a matter of finding what’s there,” says Huvenne. “Second, it’s understanding. When you understand, you can start predicting other places these [reefs] will be.”

Progress has been significant in the last 20 years. Now it’s known that in contrast to the well-studied light-loving corals of the shallow tropics, many coralline algae and coral species—including several found in the Amazon reef—are adapted to mesophotic, or mid-light, conditions, while so-called “cold-water” corals build extensive reefs in the darkness of the deep sea, sometimes thousands of meters underwater or at latitudes far removed from the tropics. Roberts’s team, for instance, located a large Lophelia coral reef that has been growing for almost 4,000 years just a few kilometers off Mingulay Island in the Outer Hebrides, Scotland (Coral Reefs, 24:654-69, 2005); other assemblages have been identified as far north as the Canadian Arctic.

These discoveries, plus increasingly sophisticated surveys, are helping scientists understand the distribution and diverse ecology of the world’s reefs, says Harvey Mudd College’s Andrea Quattrini, a coral researcher who has assisted in mapping the seafloor along the eastern coast of the U.S. and the Gulf of Mexico. It’s quite possible, she adds, that the Amazon reef won’t be the last surprise in the understudied gloomy regions between around 30 meters and 150 meters. “In that ‘twilight zone,’ as it’s known, I think the more we explore the more we’re going to find long stretches of these mesophotic reefs all over the world.”

As they’re being discovered, documenting and protecting these hidden reefs is becoming a priority. Bottom trawling by fishing boats slices through the seabed, posing a serious threat to deep-sea habitats; the Amazon reef system, home to significant fisheries of red snapper and spiny lobster, faces possible damage from drilling by oil companies. And reefs at all depths are at risk from ocean acidification weakening their carbonate skeletons, as Roberts and colleagues recently demonstrated in Lophelia pertusa (Proc R Soc B, doi:10.1098/rspb.2015.0990, 2015). Understanding reef distribution has become a crucial prerequisite for projections and conservation efforts.

For Federal University’s Thompson, that means getting back on a boat. “We proposed a system with over 9,000 square kilometers, but were able to navigate and map only 10 percent of this,” he says. “We’ll have to go back there many times, refine our maps and put more pixels in our photographs. We’ve got our work cut out for many, many years!”