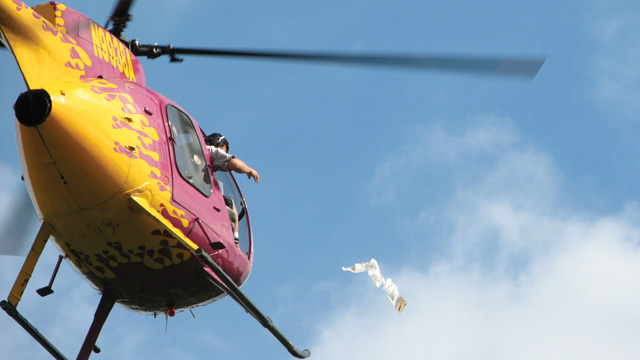 Although most island residents never encounter the nocturnal tree-dwelling snakes, they’ve have had a particularly woeful impact on Guam’s native bird, lizard, and flying-mammal species. The Micronesian kingfisher now exists only in captivity, and the Guam flycatcher is extinct. Only one of Guam’s three native bat species has been sighted since 1968, and endemic lizards have been decimated.

Birds are critical for dispersing and digesting seeds, says Haldre Rogers, an ecologist at Rice University in Houston who studies the impact of bird loss on Guam....

To try and turn this tide of disruption, wildlife managers have deployed traps, detector dogs, barriers, and poison. But these efforts are labor-intensive and difficult to implement in deep forests, where most of the snakes can be found.

Now scientists with several US Department of Agriculture (USDA) agencies, including the Animal and Plant Health Inspection Service (APHIS), and its research arm, the National Wildlife Research Center (NWRC), together with the Guam Wildlife Services Program, are trying another angle: death from above. With grants from the Department of Defense, the researchers are testing a strategy that involves showering brown tree snake habitats with toxic mice. An 80 mg-dose of acetaminophen, which is toxic to snakes, is stuffed inside the frozen carcass of a mouse neonate. The neonate is glued to a “flagger,” a cardboard square, attached to a “four-foot long streamer, like heavy-duty toilet paper” culminating in another unbaited flagger, says USDA Wildlife Services supervisory wildlife biologist Craig Clark. When the mouse is tossed from a helicopter, “it sort of rainbows,” he says, describing the arc of the poisonous mouse, and the streamer tangles in the forest canopy where the snakes reside. USDA wildlife biologists performed one drop in September 2010 as proof of principle and are planning a larger operation this year.

It’s the culmination of decades of research, says William Pitt, who coordinates brown tree snake research for the USDA. After USDA researchers showed, in a 1997 study, that dead mice were just as effective as live mice at baiting snakes, acetaminophen was identified as a possible brown tree snake poison. Then, in 2001, NWRC researchers demonstrated that seeding traps with acetaminophen-laced mice reduced the number of nontoxic mouse baits eaten by snakes by up to 80 percent.

Managers first attempted to scatter mice from the sky in 2002, but aerial bait dropping came with its own challenges. Paper parachutes were initially used to tangle the mouse baits in treetops, but in 2007 scientists tested hardier cardboard streamers. Bait persistence in the environment is a problem, says Pitt. The mice themselves only last about three days, prompting scientists to begin hunting for some kind of inanimate bait that will attract snakes for longer periods. The streamers are a different problem. Scientists hope to find more biodegradable materials, but they too must persist long enough to keep the baits in the treetops. Ground-dwelling species, such as coconut crabs, will scavenge mice that fall to the forest floor.

After tinkering with mechanical methods of deploying the mouse baits, it’s now done by hand. The mice are arrayed on trays, and one or two people sit in the back of a helicopter and drop the bait out. “You grab them and count: one thousand, two thousand…” to disperse the mice evenly, says Daniel Vice, the assistant state director for the agencies working to control brown tree snakes on Guam. The right cadence of counting and tossing was determined by driving a pickup truck at the appropriate speed through an empty field, explains Clark. An apparatus the team previously used to spray toxic mice into the forest caused the baited streamers to stick together, dropping two or three of them at a time, or tangling them in the wheels of the slow-flying helicopter. “It looked like toilet paper was stuck to the helicopter,” Vice recalls.

The next drop will tell scientists more about the challenges of scaling up the operation. They’ll drop mice over fenced and nonfenced areas of 100 acres each. Baited (but unpoisoned) ground traps will be set, and biologists will track success at eliminating snakes by measuring how many traps are emptied. This attempt will cover several hundred acres, with a field biologist sitting in the back of the helicopter, counting and tossing.

An island-wide mouse drop using a mechanized deployment system is in the works, but for now the cumbersome manual drops are the best strategy, says Pitt. The principle has been proved, and current work is focused on smoothing out the kinks: “It’s definitely working,” he says.