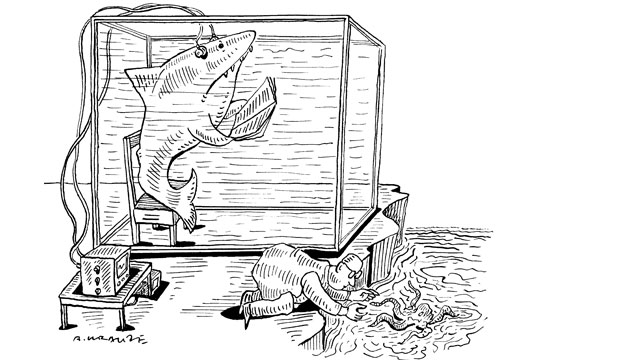 “A shark can detect a single drop of blood in an Olympic-size swimming pool.” Like most scientists who study sharks, Jelle Atema of Boston University has heard this old saw again and again. But scientific evidence for this “fact” is conspicuously lacking. The widespread belief in statements like this one speaks to the public’s fascination with sharks, but the myths also contribute to unnecessary fear of the animals.

From his laboratory at the Woods Hole Oceanographic Institution in Massachusetts, Atema is working to change the popular perception of sharks by attaching real numbers to their sensory capabilities. He’s currently working to pin down the animals’ behavioral olfaction threshold: the concentration of odor in the water that initiates a tracking behavior in sharks.

In Atema’s experiments, eau de squid—the rinse from soaking thawed cephalopods—provides the enticing odor. Each shark is tested in an experimental flow tank. With the...

The sharks at Atema’s lab are smooth dogfish, native to the coastal waters of the eastern U.S., around three feet long, with sleek, gray bodies, iridescent eyes, and broad snouts. When they’re not being used in experiments, the sharks slowly cruise around 8-foot-diameter inflatable baby pools.

After decades of studying sensory physiology in different marine animals, which include the reef fish that are the subjects of his ongoing research on olfaction, Atema returned to sharks  in the mid-2000s. He had first worked with the animals as a graduate student at the University of Utrecht under Sven Dijkgraaf and A.J. Kalmijn, who helped conclusively demonstrate in 1966 that sharks use electroreception to locate their prey.

In 2007, Atema demonstrated through behavioral experiments that sharks need both their noses and their lateral line, a sensory system that senses water turbulence, to track an odor. To follow up that finding, he wanted to record neural activity from both the lateral-line and olfactory centers in the shark’s brain as the animal tracked an odor to see how neural activity between the sensory inputs is coordinated.

So Atema and his colleagues tried to implant electrodes in sharks’ brains to record neural activity and to “steer” the sharks by activating specific brain areas involved in sensing prey. “There was the possibility that one could implant electrodes to give the image to the shark that it is actually following an odor trail and then use that to influence its behavior and steer the shark,” explains Atema.

But despite great effort, Atema and his team were unable to stabilize the electrodes enough to obtain recordings. “It was a very sad disappointment after an enormous amount of work,” he recalls.

Now Atema is conducting more behavioral experiments to probe sharks’ sensory capabilities. In 2010, he showed that sharks use the arrival time of odors at their two nostrils to determine the direction of an odor, a finding that overturned previous assumptions that the predators use a concentration gradient.

According to Gregory Skomal, senior marine fisheries scientist at the Massachusetts Division of Marine Fisheries, Atema’s research grounds sharks in reality, rather than myth. “For many decades the sensory capacity of sharks has been exaggerated,” he says. “By setting these myths straight and learning about the reality of sharks’ sensory capacities—which is still quite remarkable—we can educate the public in a way that fascinates them but doesn’t frighten them.”

Jennings agrees. “Learning about these animals opens people’s minds to their important roles in the ecosystem and the health of the ocean. The more we understand, the less we fear them.”

One challenge of working with sharks is finding ways to measure their behavioral reactions, Atema says. Unlike some other fish, which show a variety of fin flicks and subtle jaw movements, sharks appear impassive. They don’t have a rich repertoire of behaviors scientists can measure. “We were proud of using their turning behavior in response to odor pulses at their two nostrils,” he says. “Although the response was subtle, it was a reliable behavior we could measure.”

Robert Hueter, director of the Center for Shark Research at Mote Marine Laboratory in Sarasota, Florida, considers Atema a major player in taking the field of sensory physiology from a descriptive to a quantifiable science. “He’s done tremendous work to reveal the complexity of sensory processes in animals and [to] quantify how animals use their senses,” he says.