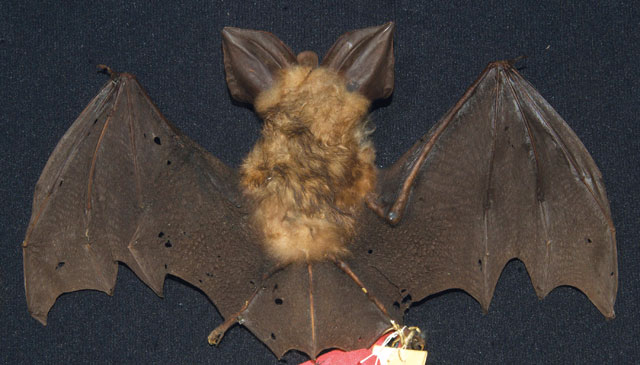 OLD BAT: Specimens from museum collections, such as this bat collected in 1923, present challenges to barcoding because their DNA can be badly degraded.COURTESY OF ELIZABETH L. CLARE

Specimen collectors from days of yore did not always handle their catch with care, at least not when it came to preserving DNA. You can’t blame them, of course. DNA as genetic material wasn’t even a twinkle in the scientific community’s eye a century ago. Aquatic specimens were often preserved in alcohol or formalin, making it all but impossible to extract usable DNA for barcoding analysis, a standard method of identifying species by variations in the same gene. Even among dry-preserved specimens, DNA breaks down fairly quickly, dissuading many barcoders from working with museum collections—with the result that they miss out on museums’ wealth of species information.

“Collections are the best places in the world to go collecting for biodiversity,”...

Several years ago, Hebert and a team of colleagues traveled to Canberra for what they called a “barcode blitz” on the Australian National Insect Collection, the world’s largest repository of Australian insects and related groups. In 14 weeks the researchers processed more than 41,000 specimens of Lepidoptera, an order that includes butterflies and moths. With assembly-line efficiency, the scientists each performed a different job: selecting a specimen, electronically labeling it, photographing it, and removing one leg for DNA extraction. Each specimen was then returned to its place in the collection. Remarkably, even though the average age of the specimens was 30 years—the oldest was 112—the team extracted barcodes from 86 percent of the species and identified 4,000 previously unknown species (PLOS ONE, 8:e68535, 2013). 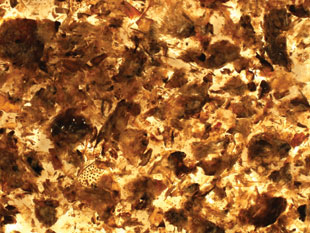 GUA-NO-WAY: The jumble of insect parts contained in bat feces is all but unidentifiable without DNA analysis. BIODIVERSITY INSTITUTE OF ONTARIOOften, the researchers were not able to extract a full-length piece of the barcode, but instead used primers to collect portions of the barcode region and piece them together. To achieve what’s called “barcode compliance,” the sequence must include at least 487 bp, but Hebert says “you really don’t need full-length barcodes” to get diagnostic species information. Stitching together chopped-up lengths of the gene region or even analyzing shorter stretches of mini-barcodes can be sufficient to identify a species.

Mehrdad Hajibabaei, Hebert’s colleague at Guelph, has been leading the development of standardized mini-barcodes of the CO1 DNA stretch, sequences of just 150–200 bp. Hajibabaei says the CO1 gene has evolved fast enough that such short stretches can expand the potential applications for barcoding. His initial motivation was to apply mini-barcodes to museum samples, but there are in fact many unmet needs for analyzing degraded DNA from sources that include soils, feces, stomach contents, and processed foods. Using next-generation sequencing, Hajibabaei, in collaboration with the US Food and Drug Administration, is working on standardizing methods to barcode seafood. “We’ve developed a set of primers to amplify mini-barcodes of various sizes to deal with this issue of processed food and canned tuna,” he says. “We’ve been quite successful.”

Processing food is one way to compromise the integrity of DNA, but passing that food through the gut of an animal is quite another, putting the barcoding of feces nearly out of reach. Researchers who look to poop for information must pick through undigested chunks to identify what an animal has eaten or use isotope tracers to figure out where that animal is located in the food web. But barcoding can offer much more dietary detail, so Elizabeth Clare, a food web scientist at Queen Mary University of London, has been working on a mini-barcode approach to analyzing bat guano. The challenge with feces is contamination by the predator’s DNA, and she’s had to design primers for amplifying barcodes that favor the prey fragments. “In [bat] feces are all the insects and the animal that ate them, so we have to minimize the animal’s [signal] and maximize the insects’,” Clare says.

So far she’s been working with fragments of 160 bp, but she’s convinced that it’s possible to recover longer stretches. Clare is experimenting with different lengths to see whether targeting longer fragments will miss some members of the diet whose DNA has been degraded to shorter lengths. “At the moment we’re basically amplifying multiple lengths, sequencing multiple lengths, and then we’re going to look at the coverage,” she says.

Animals are not the only organisms that can be barcoded, or mini-barcoded. In 2012, fungal barcoders agreed to use the nuclear ribosomal internal transcribed spacer (ITS) region as their official barcode sequence because sequencing CO1 doesn’t differentiate between fungal species. Matteo Garbelotto of the University of California, Berkeley, has been part of a project to barcode fungal specimens from the Venice Museum of Natural History in Italy. Like animal barcoders, Garbelotto has found that the full-length barcode can be difficult to obtain—but it is often not needed. There is enough diversity in just one component of the ITS region, called ITS1, to reliably identify fungal species when the full-length barcode is degraded (PLOS ONE, 8:e62419, 2013). “You can increase the success rate” of identification, he says, because “you’re getting enough divergence in the molecule.”

Of course, there is a limit to how far mini-barcodes can go. Sure, primer sets can target smaller and smaller fragments of the barcode sequence, but at a certain point species identification will be compromised, Hajibabaei says. “There is a balance between how small you can get and how powerful the approach can be in terms of resolution.”