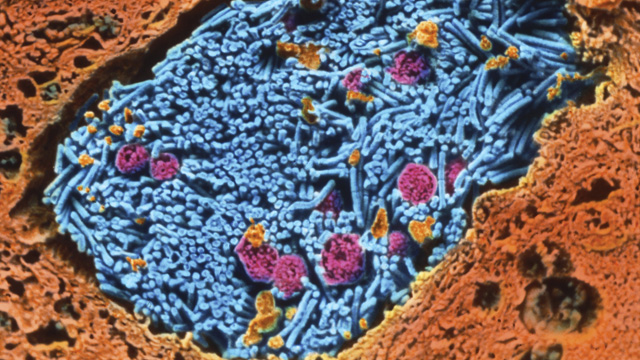 In mid-September 2001, as the dust was still settling at Ground Zero in Lower Manhattan, several news media offices and two US Senators received letters containing spores of the lethal bacterium Bacillus anthracis. Five people died, and 17 others were infected.

“The anthrax attack of 2001 was unprecedented in US history,” the US Environmental Protection Agency (EPA) wrote in an e-mail to The Scientist. “It was the first use of biological weapons on US soil in modern history.”

The cleanup following these attacks was similarly unprecedented, the agency noted. “[The] EPA had decades of experience conducting emergency responses to hazardous materials and oil spills, but had never responded to a biological weapon such as the preparation used in this attack.” After conferring with the Defense Advanced Research Projects Agency (DARPA), which had... SILK SEEDS: The cocoons of silkworms are used to create silk fibers, which are then treated with bleach to make them antimicrobial.
US AIR FORCE

“[Chlorine] bleach is a well-known anthrax spore killer,” Benjamin Tanner, founder and president of Antimicrobial Test Laboratories, a contract microbiology lab that tests surfaces and makes disinfectants and sanitizers, wrote in an e-mail. And not just anthrax—the chemical shows antimicrobial efficacy against a broad spectrum of microorganisms, and is a commonly used as a disinfectant and swimming pool sanitizer. “Everybody uses bleach,” says Rajesh Naik, a bio-materials scientist at the Air Force Research Laboratory—even the US Department of Defense, which uses chlorine dioxide to decontaminate materials and equipment that may have been exposed to infectious microbes.

Given chlorine’s powerful biocidal capabilities, researchers have also started to impregnate fabrics with chlorine compounds known as halamines. For example, one can purchase HaloShield bed sheets, which are designed to bind chlorine molecules from laundry bleach in the wash, providing renewable antimicrobial properties. “The gist of it is that you bleach the fabric to activate the N-halamine (which hangs on loosely to the chlorine), and then when it comes into contact with the microbes it chlorinates them,” Tanner says.

But while in laboratory studies such halamine-impregnated textiles have proven highly effective against “clinically relevant bacteria, such as Escherichia coli and Staphylococcus aureus, these textiles have been less effective in deactivating bacterial spores,” such as those mailed in the 2001 anthrax letters, notes industrial chemist Franco Ferrero of the Politecnico di Torino in Italy.

Recognizing this deficiency, Naik and Matthew Dickerson, a bioengineer in his lab, decided to explore the possibility of bleaching silk, a proteinaceous fiber obtained from the cocoons of mulberry silkworms, larvae of the moth Bombyx mori. Researchers had previously used halamine chemistry to add antimicrobial qualities to Nomex, a derivative of nylon, which itself was “a synthetic answer to silk shortage during the Second World War,” Dickerson says. “So it’s kind of a reverse evolution of technologies—we decided to go backwards in time, looking at a biological material, which has all the appropriate chemistry to add this kind of functionality”—namely, the presence of lots of amino groups to which the chlorine ion can bind.

After about a year of fiddling around with the pH, preparation times, and other details, Dickerson found what Naik calls the “sweet spot,” in which “you’re getting effective loading but not degrading the performance of the material itself.” The procedure, which involved dipping silk swatches in a solution of sodium hypochlorite, a common commercial bleach, for 1 hour, yielded a higher loading of chlorine into the material than had been achieved for Nomex and other fabrics. As a result, the bleached silk killed more than 99.9 percent of colony-forming units of Escherichia coli within 10 minutes, and was also effective against Bacillus thuringiensis spores, which the researchers used as a proxy for the more dangerous Bacillus anthrax (Appl Mater Interfaces, 4:1724-32, 2012).

“It could be a very powerful new technology, born from two tried-and-true materials—silk and bleach,” says Tanner. “Applications are boundless, I think, for such a simple technology.”

And its simplicity does seem to be key. “It didn’t require specialized equipment,” Dickerson notes. “The chemistry is such that—I’m not recommending this, but—someone could probably do it in their kitchen.” One of the paper’s reviewers even called the work “freshman chemistry,” Naik recalls. “That was exactly our point—that this was so easy, it could be implemented very effectively [on a] large scale.”

Naik and Dickerson are currently working with collaborators to test the silk in the field. In addition to bio-defense applications, such as wiping down surfaces following an anthrax attack, the silk could be used to create antimicrobial garments like hospital gowns or doctor’s coats to help thwart the spread of MRSA, a bacterium that is wreaking havoc in hospitals and communities around the globe, says Naik.

Correction (July 6, 2012): This story has been updated from its original version to reflect that MRSA is not a spore-forming bacterium. The Scientist regrets the error.