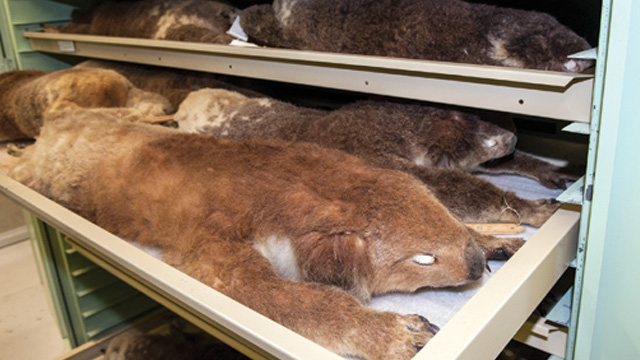 PELT PICKINGS: The koala collection that Kris Helgen sampled at the Australian Museum in SydneyCOURTESY OF SANDY INGLEBY/PHOTO BY STUART HUMPHREYS

In January 2010, Kris Helgen was deep in the bowels of the Queensland Museum in Brisbane, Australia. After selecting flattened koala pelts nestled in metal storage cabinets, he carefully cut away tiny pieces of skin, making a note of where and when each animal had originally been collected.

Helgen is curator-in-charge of mammals at the Smithsonian Institution National Museum of Natural History in Washington, D.C. He had travelled down under to gather samples from historic koala specimens for two old friends, animal biologists who wanted to extract ancient koala DNA to study the genetic history of this iconic marsupial.

With this ability to get genome data from old, degraded samples, [natural history] collections can essentially be used as time machines, allowing us to track genetic change.—­Kris Helgen,...

In 2006, Australian scientists demonstrated that the koala retrovirus (KoRV) is currently in the process of incorporating its DNA into the animals’ genomes. That’s bad news for koalas, because the virus suppresses their immune systems, leaving them susceptible to Chlamydia infections and leukemia. But for Alex Greenwood of the Leibniz Institute for Zoo and Wildlife Research in Berlin and Alfred Roca of the University of Illinois at Urbana-Champaign, the koala’s misfortune represented an opportunity to shed light on how retroviruses integrate with their hosts.

Approximately 8 percent of the human genome is retroviral in origin, as is some percentage of every vertebrate genome sequenced so far, but “the integration process is difficult to study because most viruses entered genomes millions of years ago,” says Roca. “KoRV is the only known retrovirus to be currently invading the germ line of its host, so that was the incentive to study the koala.”

In most koala populations in northern Australia, KoRV is already permanently integrated, passing from parent to offspring. But many koala populations in the south and on offshore islands have not yet incorporated the virus, suggesting that KoRV first infected the animals relatively recently. To confirm that, and to determine when and how KoRV took hold, Roca and Greenwood decided to compare DNA from modern koalas to specimens from past centuries.

That’s when they called Helgen, who tapped his curatorial contacts around the world to acquire samples from 28 koalas originally collected between 1870 and the 1980s. He sent them to Greenwood, whose team was able to sequence DNA from 18 of them—16 from the north and 2 from the south. “With this ability to get genome data from old, degraded samples, [natural history] collections can essentially be used as time machines, allowing us to track genetic change,” says Helgen.

To the researchers’ surprise, only three of the 18 samples did not contain KoRV—including both samples from southern specimens. What’s more, viral sequences from modern and museum koalas from the north were almost identical, suggesting that the virus was already established in northern Australia by the late 19th century, and has subsequently evolved and spread more slowly than previously believed. “We found very little change, so the virus is actually evolving quite slowly,” says Roca. “It also means that the koala has been suffering the pathological effects of this virus for 100 years, at least.”

“It’s a great piece of work, and it adds more pieces to this rather enigmatic puzzle,” says Paul Young of the University of Queensland, whose team first demonstrated that the virus is invading the koala genome. And it has thrown up “some interesting anomalies,” because Young’s group has since shown that KoRV seems to be spreading rapidly on Kangaroo Island, off the coast of southeastern Australia, a finding that doesn’t fit with the idea that the virus invades slowly.

The high density of the koala population on the island could explain the rapid spread. Nevertheless, “deciphering this discrepancy between what we see currently on Kangaroo Island and what they have shown about the greater Australian population with these museum pelts might be a pointer to some of the different [retroviral] dynamics in different subpopulations,” says Young.

Roca and Greenwood also studied mitochondrial DNA (mtDNA) in the koala samples. They knew that koalas had relatively low mtDNA diversity, especially in the south, and assumed it was the result of the hunting that decimated koala populations in the late 19th century. But again the findings were surprising. Comparing mtDNA from 14 museum specimens to that from modern koalas, the researchers found consistent levels of diversity. “No sequences had been lost, so we concluded that koalas had lacked genetic diversity before this recent bottleneck,” Roca says.

Climate change and the arrival of Aborigines in the late Pleistocene may instead be responsible, the researchers suggest. Regardless, William Sherwin of the University of New South Wales says that koalas’ persistence over the last 120 years, despite the consistently low mtDNA diversity across the species, means the marsupial should not be written off, even if some populations are suffering. “Some people might be tempted to say ‘forget it’ with regard to koala conservation,” he says. “But this [study] demonstrates that we don’t need to get panic-stricken about the population as a whole, at least not for genetic reasons.” On the other hand, Roca says, there is a possibility that low genetic diversity “may actually be contributing to the koalas’ inability to overcome KoRV.”

For his part, Helgen is delighted that museum pelts are proving so useful. “I love the idea that these tiny specimens of a fairly obscure mammal from the late 1800s are potentially generating fundamental insights into retroviruses,” he says. “This sort of work gives natural history collections a new lease on life.”