Researchers could one day use the method to deliver antibiotics to topical wounds infected by hard-to-treat masses of bacteria.

When Kevin Braeckmans and Tom Coenye first teamed up in 2009 to devise new ways to treat badly infected wounds, it seemed like a natural pairing. Braeckmans was a drug delivery expert with no microbiology experience, while Coenye was a microbiologist lacking drug delivery expertise. These two researchers, both at Ghent University in Belgium, aspired to outfox biofilms—cooperative clusters of bacteria that infect 90 percent of chronic wounds and stymie many antibiotics due to their sticky, tightly packed nature.

The standard therapy for biofilm-afflicted wounds is to scrape away infected tissue before the infection becomes lethal. But after four years of working on an alternative to this painful and sometimes ineffective approach, Braeckmans and Coenye were stuck. They had learned how the electrical charges and molecular sizes of antibiotic compounds affected the drugs’ movements through biofilms. And with that information, they had managed to get antibiotics deep into biofilms by packaging them into appropriately sized and shaped nanoparticles, which help ferry small compounds a bit like a taxi shuttles passengers, says Braeckmans. It still wasn’t enough.

Laser-triggered nanobubbles were often as effective at aid­ing antibiotic delivery as breaking up bio­films using sound or stirring.

“We could get the drug molecules into the taxi [and] the taxi could drive inside the biofilm. That was not a problem,” Braeckmans recalls. “But we could not get the passengers out again.”

So in 2014, the scientists started to test a different approach. Instead of incorporating drugs into nanoparticles, they tried percolating gold nanoparticles into biofilms and zapping them with pulses of yellow-green laser light. These zaps rapidly heat the particles and the water enveloping them, creating vapor nanobubbles. When these bubbles implode, they create high-energy shock waves that tear the biofilm’s structure and clear passageways for antibiotics.

To test the efficacy of the method, Braeckmans, Coenye, and colleagues grew Pseudomonas aeruginosa or Staphylococcus aureus, two bacterial species commonly found in chronic wounds, into hardy biofilms in lab dishes. They then tested how well a panel of common antibiotics and antiseptics killed bacteria in biofilms that were laser-zapped, compared with those that were left untouched or broken up with sound or manual stirring—processes known to break up biofilms, but which run the risk of heating up healthy tissue or sending fragments of destroyed biofilms into the bloodstream, respectively. Previous work by Braeckmans showed that the transfer of energy from laser zaps to vapor nanobubbles is highly efficient, and thus doesn’t generate excess heat. And while the nanobubbles generate high-energy shock waves when they collapse, these waves aren’t powerful enough to fragment a biofilm.

Laser-triggered nanobubbles, the team found, were often as effective at aiding antibiotic delivery as breaking up biofilms using sound or stirring. One antibiotic became 100 percent effective against a biofilm zapped with just five rounds of laser fire, the team notes in a paper published in the December issue of Biofilm. 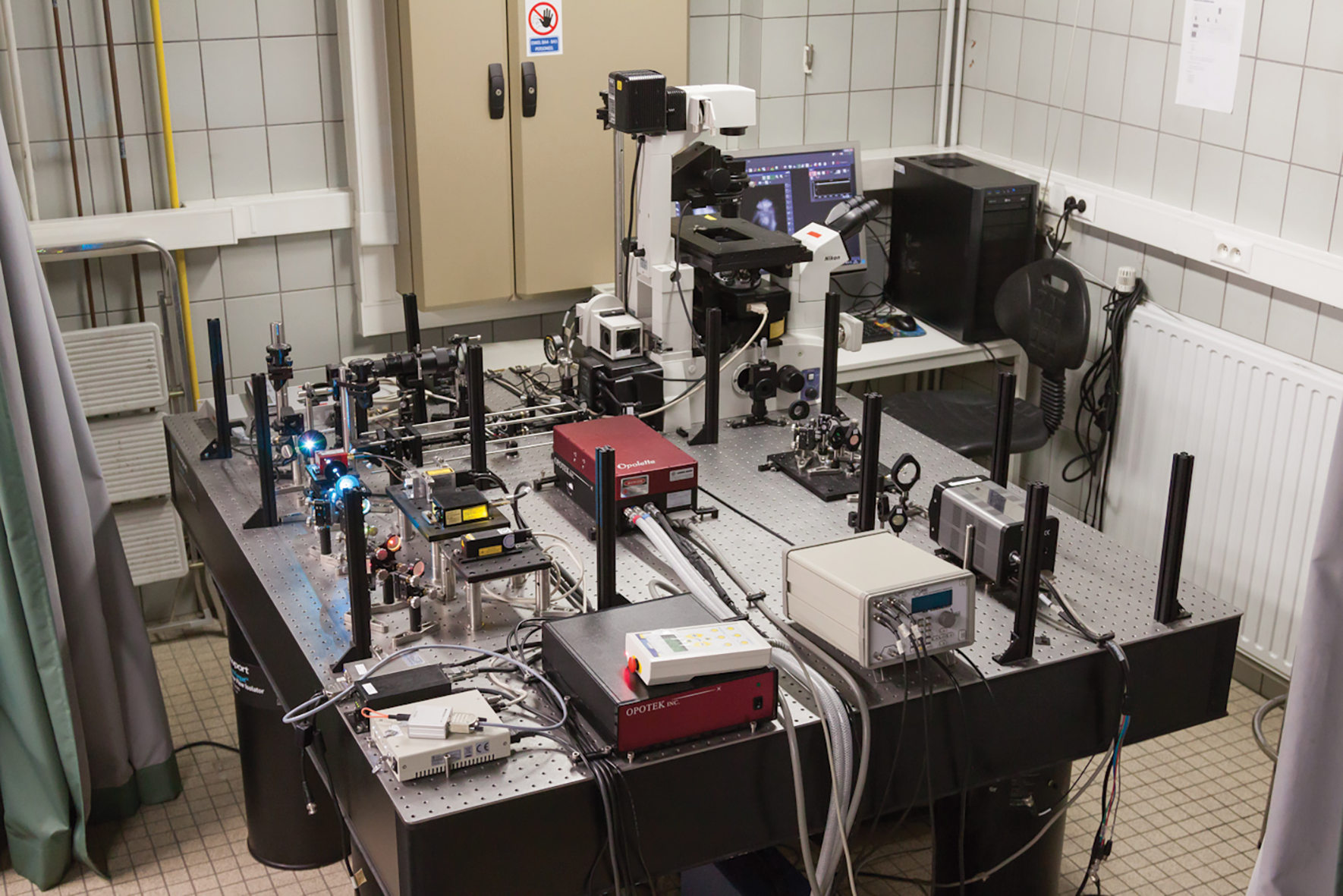 ZAPPING THROUGH BARRIERS: Researchers in Belgium used a setup involving lasers to aid the delivery of antibiotics into bacterial biofilms.
COURTESY OF KEVIN BRAECKMANS

“I think this is a really cool idea,” says Kendra Rumbaugh, a microbiologist at Texas Tech University Health Sciences Center in Lubbock who was not involved in the study. “They’ve got some important next steps and have to show that it works in animals, but I think they’re on the right track.”

Paul Stoodley, a microbiologist at Ohio State University in Columbus, thinks the findings are encouraging and warrant further investigation. But he cautions that the approach would likely only be applicable to skin-deep infections, and not to biofilms that attack bone or cause persistent urinary tract infections, for example. “If you’re using lasers, you need line of sight,” says Stoodley, who was not involved in the study. “If you’ve got a biofilm inside the body, laser light is going to be [challenging].”

The findings come with other caveats. Certain antimicrobials worked just as well on biofilms that hadn’t been zapped as on those that had, suggesting that those drugs didn’t need the laser-triggered implosions in the first place. And the laser bursts sometimes enhanced a drug’s effect on biofilms of one bacterial species but not another.

Nevertheless, Braeckmans and Coenye’s approach might work against a wider range of biofilm-forming bacteria than other biofilm-busting strategies under development. Some scientists are testing small molecules that fool biofilm-bound bacteria into resuming life as single cells, for example, while others are searching for enzymes that chop up the sugary matrix that makes biofilms so impenetrable. These strategies will likely only work for biofilms containing certain bacterial species, says Rumbaugh, while the laser-triggered nanobubbles developed by Braeckmans and Coenye could in theory blast through biofilms regardless of their composition.

The Belgian group plans to develop the technique in future studies and will test the safety and efficacy of the approach in more-complex skin and animal models. Coenye says a natural place to start would be with a laboratory mimic of skin in which structural molecules such as collagen sit atop a mixture of blood and bacterial growth medium. Researchers could infect this skin model with biofilm-forming bacteria to test whether laser nanobubbles combined with antibiotics help clear the infections.

“This approach is, I think, potentially widely applicable,” Coenye says. “One of the goals I have, before I retire, is to be able to say that I’ve contributed to bringing one new drug or one new approach to treat biofilm-related infections to patients.”

Jonathan Wosen is a freelance science journalist. Email him at jwosen@gmail.com or follow him on Twitter @JonathanWosen.