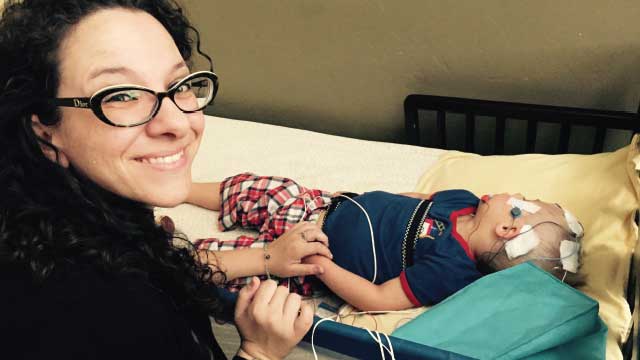 NIGHTY NIGHT: Goffredina Spanò from Jamie Edgin’s University of Arizona lab uses polysomnography to measure sleep in a toddler with Down syndrome.PAMELA SPEDER

By the early 2000s, scientists had found that sleep helps young adults consolidate memory by reinforcing and filing away daytime experiences. But the older adults that Rebecca Spencer was studying at the University of Massachusetts Amherst didn’t seem to experience the same benefit. Spencer wondered if developmental stage altered the relationship between sleep and memory, and chose nearby preschool children as subjects. She found that habitual nappers benefitted the most from daytime rest, largely because their memories decayed the most without a nap. “By staying awake, they have more interference from daytime experiences,” Spencer explains.

Until recently, most of the research into the relationship between memory and sleep has been conducted using young adults or animal models. These studies have suggested that dampened sensory inputs...

In children younger than 18 months, learning is thought to occur in the cortex because the hippocampus isn’t yet fully developed. As a result, researchers hypothesize that infants don’t replay memories during sleep, the way adults do. Instead, sleep merely seems to prevent infants from forgetting as much as they would if they were awake. “The net effect is that sleep permits infants to retain more of the redundant details of a learning experience,” says experimental psychologist Rebecca Gómez of the University of Arizona. By the time they are two years old, “we think that children have the brain development that supports an active process of consolidation,” she adds.

How sleep and memory interact at different ages has been an open question.

At that age, adequate nighttime sleep becomes critical for learning. Toddlers who sleep less than 10 hours display lasting cognitive deficits, even if they catch up on sleep later in their development (Sleep, 30:1213-19, 2007). The effects are particularly strong in children with developmental disorders, who often suffer from sleep disruptions. “Kids with Down syndrome that are sleep-impaired look like they have very large differences in language,” says Jamie Edgin of the University of Arizona who studies sleep and cognition in such children. When comparing Down syndrome children who are sleep deprived with those who sleep normally, she has observed a vocabulary difference of more than 190 words on language tests, even after controlling for behavioral differences.

Understanding the impact of sleep on memory could also help another at-risk group of learners at the other end of the age spectrum. Previous research has suggested that older adults don’t remember newly acquired motor skills as well as young adults do, perhaps because the posttraining stages of the learning process appear diminished. But neuroscientist Maria Korman and her colleagues at the University of Haifa in Israel recently demonstrated that a nap soon after learning can allow the elderly to retain procedural memories just as well as younger people (Neurosci Lett, 606:173-76, 2015). Korman hypothesizes that by shortening the interval between learning and consolidation, the nap prevents intervening experiences from weakening the memory before it solidifies. Overnight sleep might be even better, if the motor skills—in this case a complex sequence of finger and thumb movements on the nondominant hand—are taught late enough in the day, something she is testing now.

Optimizing the timing of sleep and training in the elderly takes advantage of something Korman sees as a positive side of growing old. “As we age, our neural system becomes more aware of the relevance of the task,” Korman says. Unlike young adults who solidify all the information they acquire throughout the day, older people consolidate “those experiences that were tagged by the brain as very important.”

Tests for older adults’ memory acuity are generating new findings about the relationship between sleep and memory at other ages as well. After learning at a conference about a memory test for cognitive impairment and dementia in older adults, neuroscientist Jeanne Duffy of Brigham and Women’s Hospital in Boston wondered if sleep could help strengthen the connection between names and faces. She and her colleagues found that young adults who slept overnight after learning a list of 20 names and faces showed a 12 percent increase in retention when tested 12 hours later compared with subjects who didn’t sleep between training and testing (Neurobiol Learn Mem, 126:31-38, 2015). The findings have “an immediate real-world application,” Duffy says, as they address a common memory concern among people of all ages.

A poll by the National Sleep Foundation found that adolescents have a deficit of nearly two hours of sleep per night during the school week compared with the weekend, suggesting the potential for serious learning impairments, according to Jared Saletin, a postdoctoral sleep researcher at Brown University. In fact, one study found that restricting 13- to 17-year-olds to six and a half hours of sleep a night for five nights reduced the information they absorbed in a school-like setting (J Adolesc Health, 47:523-25, 2010). However, other studies have suggested that four nights of just five hours of sleep didn’t impair 14- to 16-year-olds’ performance on tests of skills and vocabulary (Sleep Med, 12:170-78, 2011). A lack of consistency in study design and the ages of the subjects makes these conflicting results difficult to interpret, Gómez writes in a review, and much remains to be discovered about the true impact of sleep deficits on teenagers’ learning (Trans Issues in Psych Sci, 1:116-25, 2015).

Developing a fuller picture of what happens to memories during sleep—and how best to tweak sleep habits to aid the recall process—could benefit some of society’s most sleep-deprived members of every age. “We need to understand this role of sleep in memory because there is such potential for intervention,” Spencer says. “Now that we have a well-founded concept of what sleep can do for memory, it’s time to put it to the test.”