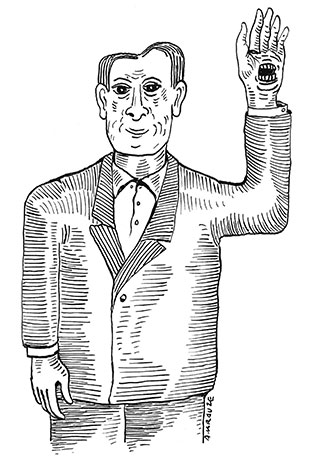 ANDRZEJ KRAUZEFor decades, psychologists and biologists have puzzled over the physiological roots of two human traits—handedness and the asymmetrical nature of language in the brain. A peculiar behavioral distribution has spurred them on: the world over, 95 percent of right-handed people do the bulk of language processing in the left hemisphere of their cerebral cortex, while only 75 percent of left-handers show the same pattern. (The other 5 percent of right-handers and 25 percent of left-handers display what is called “atypical lateralization,” meaning their language processing happens bilaterally or mostly in their right hemispheres.)

It’s a quandary that keeps Metten Somers, a psychiatrist at University Medical Center Utrecht in the Netherlands, very busy. “It’s actually a weird thing that your [brain] organization can be so different between two subjects, but your function is essentially the same,” he says. “As neuroscientists we are very puzzled that there is...

For decades, a monogenic theory of handedness—that is, that there is a single gene, albeit unidentified, responsible for the trait in humans—has ruled among geneticists in the field. And many researchers felt that the handedness gene must be overlapping in some functional way with the genetic background of language lateralization in the brain. This would explain the correlation between what hand a person predominantly uses and the cerebral hemisphere he favors to process language. This thinking is a remnant of theories that oversimplified the relationships between genotypes and phenotypes. But that did not stop some researchers from dragging the idea into the 21st century, with authors publishing works as recently as 2002 that claimed to support the monogenic theory, suggesting that handedness is determined by a single genetic locus with two alleles.

But with the advent of advanced molecular and genetic techniques, the foundation of monogenic theories has become increasingly shaky, not just in the case of handedness, but for many complex traits, such as skin color and height, not to mention some cancers and other multifaceted diseases. “Many human traits that are continuous in nature in the population (e.g., height, weight, blood pressure, different aspects of brain lateralization) are likely to have complex contributions to their variability, both genetic and environmental,” Clyde Francks, a geneticist at the Max Planck Institute for Psycholinguistics in the Netherlands, wrote in an email to The Scientist.

As neuroscientists we are very puzzled that there is this weird link between left-handedness and cerebral organization.—Metten Somers,
University Med­ical Center Utrecht

Even with the knowledge that traits as complex as brain lateralization and hand preference were unlikely to have a simple genetic foundation, Somers admits that he sought the elusive single gene that could explain the well-established behavioral distribution. “I was hoping to find the major gene that linked language lateralization and handedness,” he says. So a few years ago, he and his colleagues tracked down families in a Dutch village that had a bizarre demographic trait: disproportionately large numbers of southpaws, going back generations.

Somers and his colleagues studied the genetic makeup of 355 people from 37 large families that comprised generations of lefties, performing genetic linkage analyses of left-handedness, atypical lateralization, and degree of language lateralization in the brain. Although the team identified genome regions that were linked to all of those phenotypes separately, none of the regions overlapped (J Neurosci, 35:8730-36, 2015). The finding “overturns this older idea of a shared gene,” Somers says, and serves as strong evidence that monogenic theories of handedness or language lateralization are incorrect. “It is more complicated, and it is more in line with many recent findings that traits are composed of many genes rather than single genes.”

Sebastian Ocklenburg, a neuroscientist at Ruhr University Bochum who was not involved with the study, adds that the results hammer a nail in the coffin of both the monogenic theory and the idea that the observed relationship between handedness and language lateralization involves genetic overlap. “It’s the first study that shows that the genetic factors that are influencing these traits are not overlapping,” he says. “This study more or less showed that this kind of theory, which is based on distributions of behaviors, is basically wrong on a number of levels.”

The task that lies ahead for researchers like Somers, Francks, and Ocklenburg is to actually identify the gene networks that influence complex traits such as handedness and language lateralization. According to Francks, this may involve studying individual families in greater depth to check for idiosyncratic, rather than generalizable, genetic traits. “If we allow for genetic heterogeneity, i.e., the possibility that different families can in principle have different major genetic effects going on, then it may be fruitful to analyze some of the largest individual families separately from the rest, without pooling them together, which can mask such heterogeneous effects,” he wrote. “We are taking that approach by studying large individual families with multiple left-handed members, under the hypothesis that some families may have their own relatively rare or unique genetic effects going on.”

Whatever the case, it will require clever studies and the latest technologies to fully characterize the genetic components that give rise to such complex traits, not to mention the environmental or epigenetic factors that influence them. “I am excited to see where this leads,” says Ocklenburg, “but I am not sure exactly where it will.”