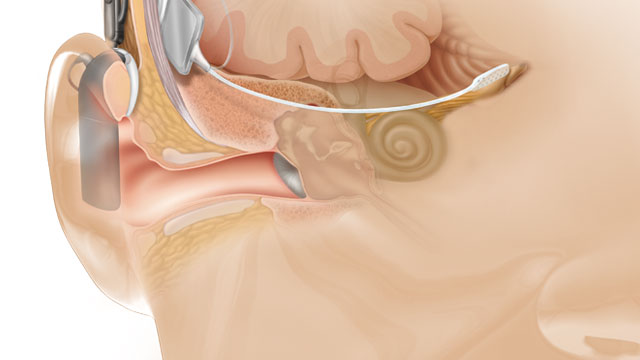 COCHLEAR BYPASS: Auditory brainstem implants connect directly to the cochlear nucleus of the brainstem to restore some level of hearing to people with limited or no auditory nerves.COCHLEAR INC.

Shortly after giving birth to her first child, Julie Lopez found out her daughter was deaf. Angelica failed her newborn hearing screen. Lopez and her family, who live in Big Spring, Texas, drove five hours to Dallas for a second evaluation, and the test result was the same. “We were devastated,” says Lopez. “We did not expect it.”

No one in Lopez’s or her husband’s family is deaf, and they wanted their daughter to have a chance to hear. So they opted to try cochlear implants (CIs)—devices that involve threading an electrode array through the inner ear to stimulate the auditory nerve upon input from an external microphone and speech processor. But Angelica’s auditory nerve was too severely underdeveloped...

Auditory brainstem implants (ABIs) are much more invasive than cochlear implants, requiring a hospital stay and a very technically difficult procedure. Working pretty much blindly, surgeons implant a tiny electrode array into in the squishy brainstem, targeting a small area called the cochlear nucleus, while being careful not to hit any of the other important nerves in the area. The electrodes work similarly to a cochlear implant. A receiver detects sound in the environment that is processed and translated into electrical stimulation. Lopez hesitated. “It was just so hard to put our perfectly fine baby in the hands of strangers for surgery,” she says. That same concern—subjecting a child to a craniotomy when she wouldn’t otherwise need one to survive—for decades kept US regulators from approving the implant for people who weren’t already undergoing brain surgery. But now, four institutions are testing the waters in clinical trials. 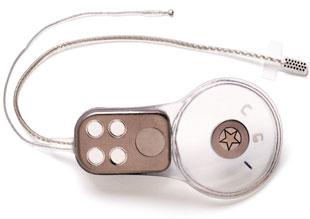 EARWIG: The internal components of an ABI, including the electrode array (far right) that is inserted into the brainstemCOCHLEAR INC.The first ABI was handmade and implanted in 1979 by William House, inventor of the cochlear implant, in Los Angeles. Laurie Eisenberg, a pediatric audiologist at the University of Southern California, was a member of the team who worked with that first patient. At that time—and still now, excepting the four clinical trials—only patients with neurofibromatosis, a condition that can lead to tumor growth on the auditory nerves, were considered candidates for ABIs. In these cases, the patients need brain surgery to remove the tumors and save their lives.

After reports of success with ABI, families with deaf children who did not have neurofibromatosis and who had failed with cochlear implants became interested. But Eisenberg and others could not offer it to them. The US Food and Drug Administration first wanted evidence in adults that ABI in non-neurofibromatosis patients was safe, says Eisenberg. But her team could find no adults to enroll in a trial. So families were left without an option for decades.

Then, in 1996, Vittorio Colletti of the University of Verona in Italy implanted ABIs in adults without neurofibromatosis. “Surprisingly, these patients obtained high levels of open-set speech recognition without visual cues, many with more than 50 percent sentence recognition and a few able to converse on the phone like CI patients,” Colletti writes in an email. He says he was motivated to expand the patient population for ABI because “we observed several children with cochlear nerve deficiency that were fitted with [CIs] and were not obtaining significant benefit from this device.” Just before Christmas in 2005, the first American child was implanted. “More and more [young patients], every year, and from all over the world” now travel to Verona to receive implants. About 130 non-neurofibromatosis pediatric patients have been fitted with ABIs so far.

The outcomes are encouraging. For children with cochlear deficiency who are fitted with ABIs, Colletti says, 85.7 percent can identify sounds and respond to speech; about 62 percent can understand some speech without lip reading; and roughly 14 percent can talk on the phone. Only about eight percent don’t respond to the implant.

“For many years, the comments of the neurotologists from U.S.A. were that there was no moral justification for an invasive procedure that was placing electrodes in the brain of a child for restoring hearing with no guarantee of an outcome better then those obtainable with a single-channel [CI],” says Colletti. Cochlear implants are generally now multichannel, meaning they stimulate nerve fibers at different parts of the cochlea to confer pitch to the listener. Although ABI design has improved since the 1970s, the devices continue to be single-channel, like the earliest cochlear implants.

But some physicians in the field, including Daniel Lee of Massachusetts Eye and Ear Infirmary, say it’s disappointing when cochlear implants fail and he can’t offer patients another option. Colletti’s work is now changing that. “It put ABI back on the map,” Lee says.

Lee is now leading a clinical trial to enroll 10 children who have been deaf since birth and five who have developed deafness. Lee traveled to Verona to train for the surgery with Colletti, and Colletti attended Lee’s first implant. So far, Lee has implanted ABIs in five children with congenital deafness. One had to have it removed after he fell and hit his head, but the other four have had no trouble—in fact, they all have sound detection with their implants and are making progress toward pattern perception. One child is showing the first signs of oral language abilities, and it’s still early days, says Lee.

In Eisenberg’s trial at USC, four children have undergone the surgery, and the goal is to enroll ten. Although it’s been a long time since Eisenberg worked with the first ABI patient, she says she doesn’t necessarily want the procedure to gain widespread approval in the U.S. “It’s so much more delicate as a surgical intervention [than cochlear implants], and it does require a very experienced team of surgeons . . . and support from pediatric specialists.” She says she’d rather see it offered only within centers that have developed expertise with the implant technique and the therapy that follows.

After much prayer, Julie Lopez agreed to enroll Angelica in Eisenberg’s study. “My concern was safety,” says Lopez. “I didn’t want her to be walking down the street and not hear a car or a dog coming up behind her.” Just after Angelica turned three last year, she underwent the surgery. Months later, nothing seemed different, until one day last winter when Lopez took her daughter to the bathroom during an audiology therapy visit. Someone out of sight flushed a toilet and Angelica signed to her mother, “You listen, flush potty.” Lopez was thrilled. “I thought, ‘Oh my God, you heard that!’”