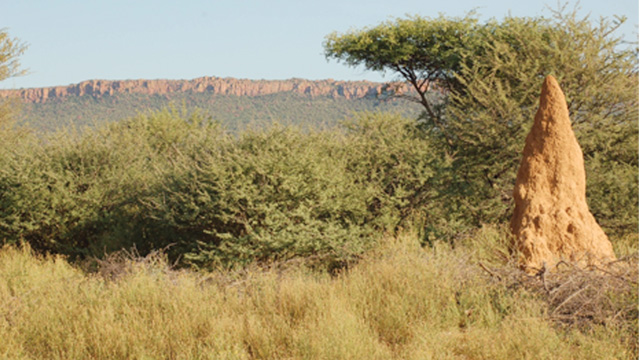 TERMITE TOWER: Vibrations reverberate throughout the complex architecture of termite nests, or “termitaria,” which can include spires that reach as high as 3 meters.CHRISTINE STRUCK

While studying termites (Macrotermes bellicosus) in Africa’s Ivory Coast in the late 1990s, animal behavior researcher Wolfgang Kirchner noticed something peculiar as he observed the insects’ colonial mound: “At first, I heard a noise which seemed to move across the surface,” he recalls. “I could really hear it because in that species, and in this place, there were lots of soldiers on the surface of the nest. Then I could see waves of drumming [propagating] across the surface.”

Unfortunately, Kirchner’s field research was interrupted by a military coup that overthrew Ivory Coast President Henri Konan Bédié in 1999. But now, more than 10 years later, he has identified a similar drumming behavior in two related species in the Southern African savanna,...

While only a handful of insects can hear acoustic stimuli—through their antennae or the specialized tympanal organ—many use forms of seismic communication, detecting low-frequency vibrations through specialized subgenual (“below the knee” in Latin) organs or sensory hairs. Some ants, for example, will rub a patch of tiny ridges on one part of their rear section, or gaster, against a curved ridge called a scraper, sending out vibrations. Leafcutter ants (Atta cephalotes) stridulate like this as they excise leaf fragments, attracting workers to help carry the leaf pieces back to the nest. Ants that move about in subterranean tunnels also stridulate to attract help when buried by a cave-in. Some insect species are even known to coordinate their vibrational calls to amplify the signal. In species of treehoppers that exhibit maternal care, for example, the young will “chorus” their stem-vibrating behavior in response to an approaching predator to alert their mother to the danger as quickly as possible.

“Vibrational communication is probably considered the oldest way of communication among living beings,” says applied entomologist Valerio Mazzoni of the Istituto Agrario di San Michele all’Adige in Italy. “It is a very basic way to communicate. . . . You just need to be in contact with the surface that is vibrated.”

When termites drum their heads against the substrate as a predator threatens, they create a pulsed seismic vibration that other termites can detect through a subgenual organ on their lower legs. Such vibrational messages do not travel very far, however, and would never be able to reach the far corners of the nest and surrounding foraging sites of some termite species—complexes that can cover areas of up to 2,000 square meters. To defend their entire nest, these termites need a system a bit more sophisticated: they must somehow propagate the signal from its source throughout kilometers of tunnels.

Kirchner, of Ruhr University Bochum in Germany, and his then-student Felix Hager investigated this behavior by using accelerometers to measure the vibrations traveling through the nest surface and the subterranean passageways. The insects initiated drumming behavior when the researchers sent puffs of air into the nest, simulating the breeze that ensues when a predator damages the nest’s outer wall. The vibrational signal that resulted traveled across the meters-wide nest system—and the signal at the far end was just as strong as it was at the source (J Exp Biol, 216:3249-56, 2013). Based on this undampened amplitude and the time it took to get from one side of the nest to the other, the researchers surmised that the behavior was contagious: when termites detected the vibrational signal of their nest mates’ drumming, they began to drum as well.

“I guess ultimately I’m not surprised that this is going on,” says Darren Rebar, who is finishing his PhD in evolutionary biology at the University of Wisconsin–Milwaukee, where he studies insect vibrational communication. “But it’s actually really fascinating when you think about it, in terms of communication within these giant colonies.”

“[Kirchner’s group] measure what is called the active space of the signal,” says Mazzoni. “That is defined as the surface or the volume where the signal is active towards conspecifics.” The researchers found the size of that active space to be several meters in area.

Mazzoni notes that if similar communication systems are uncovered in pest species of termites, the results could have implications for pest control. “The fact that there is an alarm signal [means] you have a tool potentially to create problems for the insects,” he says, referring to a paper he published with colleagues last year demonstrating how disruption of substrate-borne vibration signals of a grapevine pest called leafhoppers (Scaphoideus titanus) can reduce their mating frequency (PLOS ONE, 7:e32954, 2012).

But many researchers are more interested in the basic science angle, and with affordable technology now available for detecting insect vibrational signals, the number of examples of such communication systems is only going to grow, says United States Department of Agriculture entomologist Richard Mankin, who studies acoustic and vibrational communication. “A lot of different families of insects do more vibrational communication than acoustic, so it’s a wide-open field.”