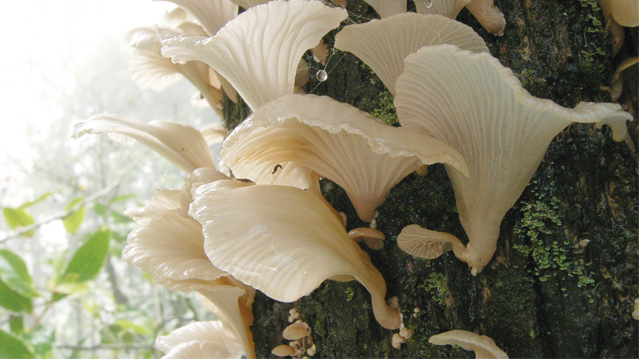 KILLER SHROOMS: Close-up of a flower-like mushroom, Trogia venenata, found in the highlands of Yunnan Province, China.COURTESY OF JIKAI LIU

Over the course of 30 summers, as seasonal rains drenched the verdant highlands of Yunnan province in southwest China, here and there a villager would suddenly drop dead. The killer, which became known as Yunnan Sudden Death Syndrome, took roughly 400 lives over the course of 3 decades, but never revealed its identity. As the cases piled up, the Chinese government became increasingly anxious. Then, spurred into action by a TV documentary that aired in 2005, officials dispatched an elite investigative unit from the Chinese Center for Disease Control (CDC) and Prevention to scour the hills for clues.

“Otherwise healthy people would suddenly faint, go into a coma, and die,” says Robert Fontaine, an epidemiologist at the US Centers for Disease Control and Prevention who was part of...

In Yunnan, remote villages are scattered among mountains and valleys, and people speak in various dialects, which made the first epidemiological studies difficult. Nevertheless, investigators soon came up with a couple of hypotheses. Most of the villagers where clusters of these sudden unexplained deaths (SUDs) occurred drank water from local streams, so perhaps barium, a heavy metal known to seep into the water supply and soil, and capable of causing cardiac arrest, was to blame.

The team also came to suspect that mushrooms could be involved, because the vast majority of SUDs occurred in July and August, when entire villages head out to harvest the diverse array of fungi for which Yunnan is famous. “But there was no known mushroom capable of causing this kind of death,” says Fontaine.

Between 2006 and 2009, the Chinese CDC stepped up its surveillance efforts. Rushing to the homes of recent victims, on most occasions they found that the residents had eaten curious white, flower-like mushrooms. These specimens turned out to be a new species, named Trogia venenata by scientists at the Kunming Institute of Botany (KBI), but commonly known as the Little White. It turns out that T. venenata grows in abundance on fallen trees in Yunnan but has no commercial value, so when collected, it’s usually eaten, rather than exported to Japan as most Yunnan fungi are.

By the end of 2009, investigators had established that the majority of families that suffered SUDs had eaten T. venenata, whereas not one of the unaffected families living nearby had consumed it. Moreover, the mushroom was common in the vicinity of 75 percent of villages that had experienced clusters of deaths between 1975 and 2009, while it was in the vicinity of only 17 percent of villages with only one death (PLOS ONE, 7:e35894, 2012). Another pillar of support for the case against T. venenata was the fact that reported SUDs decreased dramatically after a concerted campaign to warn villagers in affected areas to avoid the mushroom.

But it was not clear how the Little White had been killing unsuspecting villagers. Determined to chemically profile the fungus, a team led by Ji-Kai Liu at the KBI and Guang Zeng of the Chinese CDC collected hundreds of specimens for toxicology tests. In early 2012 they confirmed that T. venenata contains three toxic compounds: α-guanidinobutyric acid, known to cause seizures in rabbits, and two previously unidentified amino acids with unusual chemical configurations (Angew Chem Int Ed, 51:2368-70, 2012). Although each of the new amino acids was lethal in mice, their toxicity was not particularly strong, meaning a human would have to eat roughly 400 g of the dried mushroom to suffer the same fate.

“They even found [fragments of] one of these new amino acids in the blood of a victim,” says Fontaine. “The question now was the mechanism: How was this mushroom killing people?” The first answer came in July 2012, when Zeng’s group demonstrated that T. venenata induced hypoglycemia and sudden death in mice (PLOS ONE, 7:e38712, 2012). How that happens is not yet clear, but Fontaine suggests it may be similar to the toxic mechanism elicited by eating the ackee fruit, parts of which contain amino acids called hypoglycins—similar in structure to those in T. venenata. These amino acids block the β-oxidation of fatty acids and the generation of glucose from noncarbohydrate sources, resulting in rapid depletion of circulating glucose and of glycogen stores in liver and muscle cells.

Since heart muscle cells rely on β-oxidation to get energy from fats, inhibition of that process can sometimes be lethal. Furthermore, Fontaine points out, since brain cells use glucose as their sole energy source, glucose depletion can quickly induce coma.

Some researchers are not convinced, however. “The hypoglycemic test was not performed using the three compounds, but the crude extract of the mushroom,” meaning other compounds may be responsible for inducing hypoglycemia, says Kimiko Hashimoto, an organic chemist at Kyoto Pharmaceutical University in Japan, who has previously isolated a killer toxin from the mushroom Russula subnigricans. Nevertheless, if Liu and his colleagues turn out to be correct, Hashimoto says, “this is a new type of mushroom poisoning.”

No SUDs were reported from the areas of Yunnan monitored by the Chinese CDC in 2010 and 2011, so for now the case is closed—at least from a public-health perspective. “We know how to stop it, and interventions have worked,” says Fontaine. The molecular mechanisms by which the Little White took its victims remain the final mystery.