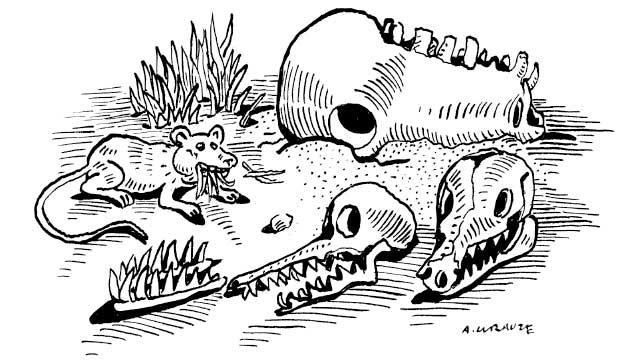 As a master’s student at Indiana University a few years ago, David Grossnickle became fascinated with the evolution of early mammals. His dissertation project involved comparing the skulls of modern mammals to those living when the lineage first appeared in the late Triassic, a little more than 200 million years ago, and inferring the ancient creatures’ diets based on their jaw shape. But it was while working on this project that Grossnickle came across something that puzzled him.

At the back of each side of extant mammals’ lower jaw is a bony protrusion called the angular process. “It’s found in basically all modern mammals, so I was using it in all my measurements,” Grossnickle explains. “But when I looked at the fossils, I recognized that some of these early mammal groups just didn’t have an angular process. That really baffled me, because there are major muscles that attach at the back corner of the jaw.”

These muscles are crucial to the way we and our evolutionary relatives chew. Unlike almost all other modern animals, mammals can move their jaws in multiple dimensions to produce not only pitch rotation—the up-down movement allowing cutting of food—but yaw rotation: the side-to-side, grinding motion typical of chewing in cows or goats. This unique physiology gives mammals the ability to process a diverse range of foods—from insects and meat to tough plant matter. Indeed, some researchers consider this to be a key contributor to our lineage’s survival through the mass extinction event at the end of the Cretaceous, which all but wiped out other vertebrate groups such as the dinosaurs.

Realizing that changes in jaw shape must have played an important role in these dietary adaptations, Grossnickle decided to pursue a PhD on the topic at the University of Chicago, and began scouring the literature for information about jaw shape in mammals living from the Triassic through the early Cretaceous. There wasn’t a whole lot to find. While many studies of teeth from the same period found that mammalian molars—the flattened teeth at the back of the mouth—were beginning to show small basins allowing the upper and lower teeth to grind against each other and crush tougher food, there had been little exploration of what might have been going on in the jaw to accompany these changes.

It’s a very interesting study, because it connects the tooth morphology with jaw morphology, which really is something that hasn’t been done before.—Thomas Martin
University of Bonn, Germany

“The jaw typically gets ignored,” explains Brian Davis, a researcher at the University of Louisville School of Medicine who studies jaw and dental morphology in early mammals. “Teeth are most of the [fossil] record, and they’re kind of the business end of chewing, so they get most of the attention,” he says. “But jaws are along for the ride on every aspect of this, and they’re changing through mammal history too, so quantifying the shape of the jaw is really important.”

To make this quantitative account, Grossnickle needed, of course, jaws. But fossilized skulls are rarely in good condition, making detailed measurement a challenge. “We don’t have all the bits of the fossils and often they’re not even preserved in full three-dimensional form,” explains Alistair Evans, a paleontologist at Monash University in Melbourne, Australia. “Often we get jaws that have been squashed flat, and all we see is a sort of photocopy of what the jaw used to be.”

So Grossnickle had to take an indirect approach. For starters, he tried to glean as much as he could from published images of fossils to estimate the average dimensions of early mammalian jaws, and in particular the angular process—if it was present at all. He also took advantage of a fellowship at the Field Museum of Natural History in Chicago, which has its own collection of modern skulls—including those of small insectivorous creatures that are considered good analogs for early mammals, such as moles, shrews, and hedgehogs. “I looked through a lot of modern mammals and photographed the jaws from different angles,” Grossnickle says. “Then, based on my measurements, I recreated 3-D models.”

With these models of early mammalian jaws, plus approximations of where muscles might have attached to them, Grossnickle was able to reconstruct how our distant ancestors might have chewed. He found that as mammals evolved a more prominent angular process at the back of the jaw, they lost torque in the up-and-down movement that allows biting. But at the same time, they gained a mechanical advantage in the side-to-side jaw movement that would allow teeth to grind against each other—an adaptation that Grossnickle suspects would have been a critical precursor to changes in teeth morphology that allowed the adoption of a wider range of diets (Sci Rep, 7:45094, 2017). “You may first have to have had this ability to produce yaw before mammals would have evolved the molar morphology that requires this motion,” he says.

Although this shift towards yaw rotation isn’t a surprise given the way modern mammals chew, the link that this study makes between jaws and teeth provides a new piece of the puzzle of mammalian evolution, says paleontologist Thomas Martin of the University of Bonn, Germany. “The point he makes is that changes in jaw geometry took place in concert with the evolution of the molars,” he says. “It’s a very interesting study, because it connects the tooth morphology with jaw morphology, which really is something that hasn’t been done before.”

Grossnickle “did a novel job combining teeth and jaws,” agrees Davis, adding that “he was able to map really nicely changes in jaw shape across a mammal family tree.” Davis notes that future work could include an investigation of further “important landmarks” of the jaw in addition to the angular process, as this bony spike “is not the only point where muscles are attached.”

For now, Grossnickle is focused on trying to finish up his PhD. But he hopes one day to take a similar approach to jaw reconstruction in mammals at different stages of the evolutionary timescale. “I looked at the very early lineages of mammals,” he says. “But you could apply these methods to other fossil lineages that may be a little more closely related to modern groups. That’d be fun.” 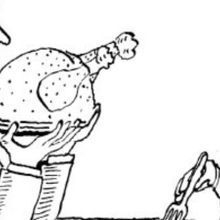