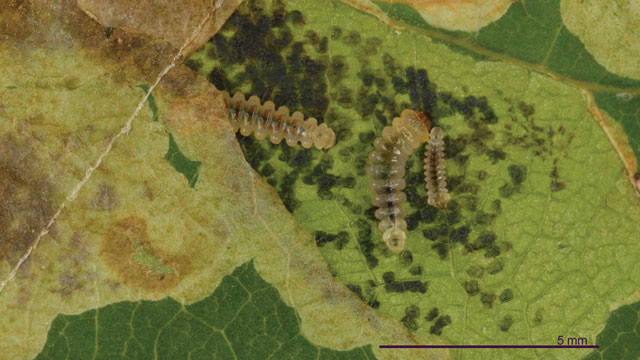 In 2009, Natural History Museum, London, lepidopterist David Lees joined a project to study horse chestnut leaf miner moths (Cameraria ohridella), which are currently infesting trees across much of Europe, defacing their leaves with distinctive brown scars. Researchers first discovered the insects in 1984 infesting trees in Macedonia, but they weren’t sure where the insects had come from or what might be done to stop them. Entomologists started tracking the leaf miner’s spread in 1989, when the moths suddenly began racing across Europe at the breakneck speed of 60 kilometers per year, finally turning up in Britain in 2002. “Now it’s everywhere,” Lees says.

The insect’s host, the horse chestnut tree, is prized by landscapers for its beauty and in the Balkans its fruits were traditionally fed to horses to treat cough. And its...

Lees hoped that pinpointing the moth’s origin might also lead biologists to find predators of the leaf miner that could be used as natural pest-control agents. He assumed that the insect had come from outside Europe because it wasn’t discovered on the continent until 1984, and because its uncontrolled spread indicated that it must have been introduced into a new environment, escaping its natural predators. But none of the “old entomologists” that he asked had found any living populations or preserved specimens in their travels in Asia or the Americas. So Lees contacted H. Walter Lack, director of the Berlin Botanic Garden and the Berlin-Dahlem Botanical Museum, who had written a paper detailing the natural history of the horse chestnut tree after he stumbled across an herbarium specimen collected from Greece in 1795. Lees asked Lack if he would search the botanical museum’s collection of pressed and dried horse chestnut leaves for scars left by leaf miners. Lack sent him a couple of scanned specimens, one of which had been collected from Albania in 1928. Not only were there “mines,” the telltale trails left by the moths’ larvae as they burrow through leaves, but “both of them had caterpillars which were quite well pressed,” Lees says. “We were astonished to find an older specimen right here in Europe.”

In one fell swoop, Lees had pushed back the earliest known record of the moths inhabiting European horse chestnut trees by nearly 60 years—and had also tapped an underutilized resource for entomological research. “Most entomologists, even if they know the host plant, don’t tend to look at the herbarium specimens,” says Lees.

Emboldened by the discovery, Lees searched other herbarium collections across Europe and found larvae or pupae in half of the herbarium samples that he examined. The oldest specimen was at Kew Gardens and had been collected in Greece in 1879—more than 100 years before the moth was first “discovered” in Macedonia.

Horse chestnut seeds had been travelling in the pockets of visitors to and emigrants from the Balkans since at least the 1570s, so why hadn’t the moths spread throughout the European Union earlier than the 1980s? The moths are only found in the tree’s leaves, not the seeds, Lack points out. “We suppose that the moths have come into contact with the rest of Europe only after Greece joined the EU,” he says. “There was money to build forest roads. We speculate that dead leaves were transported over large distances in the wheels of cars and trucks.”

Extracting even more information from the decades-old herbarium specimens, Lees and his team probed the larvae and pupae for genetic material. The dry herbarium environment favors DNA preservation, but Lees’s team was surprised that any of it was sequenceable. They used DNA barcoding—a rapid way to identify species of almost all animal groups by sequencing a 658 base-pair region in the mitochondrial cytochrome c oxidase 1 gene and comparing it to a standard reference library. Stitching together short fragments of the gene, the team discovered four haplotypes—unique genetic signatures—among the samples, including three that were new to science. With this information, they were able to map them to a database of 25 previously known leaf miner haplotypes and pinpoint the species’ origin in the steep, remote ravines of Albania, Macedonia, and Greece. “The really special thing was that they could prove” that the population marching across Europe is a less diverse subpopulation of the source population, says Alfried Vogler, Imperial College London entomologist and Lees’s former postdoctoral advisor. “If the source population was invaded by the derived population again, they would not have known it without the old samples.”

The next step, says Lees, is to look at the wealth of other information that can be gained from herbarium collections, which add the dimension of time to that of location, making them useful for gaining new insights into biodiversity and, says Lees, to potentially track global warming. “Entire ecosystems might be found on these plants—pathogens, bacteria, undescribed species. This is the tip of the iceberg.”