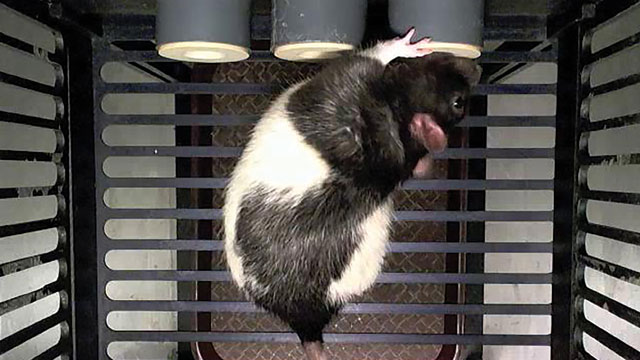 RAT RACE: Viewed from above its enclosure, a lab rat pokes its nose into a device designed to test its decision-making abilities.SANTIAGO JARAMILLO

Rats are smart, and mice are dumb. For more than a century, this was the prevailing dogma among scientists who study how brains make choices based on sensory inputs—the type of researchers who train rodents to run mazes in order to uncover mechanisms of long-term memory, problem solving, and other cognitive tasks.

When Anthony Zador set up his lab 15 years ago at Cold Spring Harbor Laboratory in New York, he and his colleagues began developing “tricks to train rats.” After several years, he says, “we were pretty confident that [rats] can process sensory stimuli and make decisions about them—that they have attentional processes.” At the same time, researchers were generating a wealth of genetic and molecular tools in mice, allowing the visualization and manipulation...

Myths about mice are being dispelled little by little.—Matteo Carandini,
University College London

As a postdoc working with Zador, Santiago Jaramillo was eager to take advantage of these resources to examine auditory processing in mice. “The question at that point was: Well, now that we have all these great tools to study the neurobiology, do the mice actually have the behavioral repertoire that we want to be able to study cognition?” recalls Jaramillo, now an assistant professor at the University of Oregon.

“The rumor was that it’s very difficult to train mice, and that you could never train them as well and effectively as you can train rats,” says Zador. But his group’s experience establishing rats as a behavioral model, even in the face of skepticism from primate researchers, suggested that stubborn scientists, rather than dim-witted animals, might underlie such assumptions.

So Jaramillo and Zador set out to compare the decision-making abilities of rats and mice in a head-to-head contest (Front Syst Neurosci, 8:173, 2014). In a “flexible categorization task,” they trained both mice and rats to discriminate between high- and low-frequency sounds by poking their noses into ports on the right or left side, respectively, of a three-port chamber. The animals received a water reward for correct choices. Although mice took longer to train than rats on average, both rodent species successfully adapted to changes in the boundary between high and low frequencies. 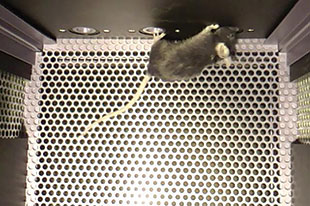 MOUSING AROUND: Mice performed almost as well as rats at similar decision-making tasks, according to San­tiago Jaramillo.SANTIAGO JARAMILLO“It was surprising that they actually performed equally well,” says Jaramillo. “I wasn’t expecting that the behavior [of the mice] would be pretty much what we achieved with the rats.” The shorter training times for rats, he says, could be “because of us as experimenters, and our larger experience working with rats.”

Thanks to the recent profusion of transgenic mouse lines, mice offer broader possibilities than rats when it comes to techniques such as optogenetics, which gives researchers the ability to control subtypes of neurons using particular wavelengths of light. (See “The Birth of Optogenetics,” The Scientist, July 2011.) For example, transgenic mice engineered to produce a photosensitive opsin protein in a specific subset of auditory cortex neurons enabled Jaramillo’s research group to decipher how neurons represent auditory signals.

On the other hand, viral-vector approaches to light-sensitive protein expression are constantly improving, making optogenetics increasingly accessible in rats, says Jeffrey Erlich, who recently established his own research group at New York University Shanghai. He plans to use both rats and mice to investigate the effects of stress on economic decisions. “With mice we can knock out specific receptors, and we can really target the molecular pathway between stress and economic decisions,” says Erlich. “With the rats, I think it’s going to be easier to do the electrophysiology, and there are certain things, I think, that rats are still better at.”

For one, rats are more patient than mice: they are able to wait for several seconds while sensory stimuli are presented to them. And rats’ larger size makes them more amenable to experiments that use head-mounted probes to record their neural responses while they move about freely. (For cautionary notes about using mice in behavioral studies, see “Mouse Traps,” The Scientist, November 2014.)

Still, mice may have the edge when it comes to studies of visual processing, according to Matteo Carandini of University College London. “It’s really important to control the sensory environment, so you know exactly what sensory stimuli you’re giving to your animal,” he says. “Because we study vision, we need to make sure that we know where the eyes are pointing.” Carandini and his team conduct many of their experiments in mice with their heads fixed—a setup that can be “disastrous” in bigger, stronger rats, he says.

“We never see it as a fight” between mouse and rat models of cognition, says Jaramillo, who points out that the ultimate goal of this research is to shed light on attention and decision-making in humans. Even so, self-described “mouse supremacist” Carandini rejoices as “myths about mice . . . are being dispelled little by little.” And while “there is nothing stopping the field from developing the same tools in rats that have been developed in mice,” he says, “the question is, do we need to?”