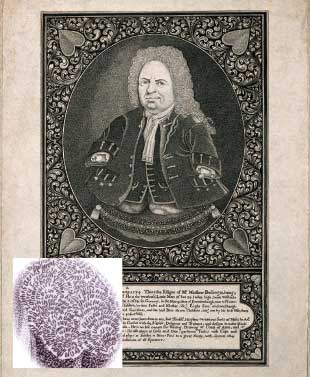 ABLE ARTIST: Accomplished micrographer Matthias Buchinger hid infinitesimally small script in his artwork, such as this self portrait, which contains seven biblical psalms and the Lord’s Prayer in the curls of his hair (inset). WELLCOME IMAGES/WIKIMEDIA COMMONS; KINGOFSPADES/WIKIMEDIA COMMONSEighteenth-century German polymath Matthias Buchinger possessed myriad talents, from magic to music to micrography, an art form in which impossibly tiny words are arranged to form larger images, often portraits. Among his most spectacular works is a self-portrait in which his voluminous curls—covering just a few square centimeters on the page—spell out passages from the Bible and the Lord’s Prayer.

Buchinger’s drawings are a feat of precision and dexterity, made all the more noteworthy by the fact that the father of 14 completely lacked hands and feet. He was born in 1674 in Germany with stumps at the ends of his arms and above where his knees would have been....

Ricky Jay, a well known sleight-of-hand artist, has been fascinated with Buchinger for decades. As a boy he read books about the history of magic that included portraits of Buchinger. “I thought it was extraordinary that this fellow did magic,” says Jay.

Buchinger was skilled at the trick called cups and balls, in which a ball is hidden beneath one of three cups. At the finale, Jay says, Buchinger would lift the cups, revealing fruit, grain, and even live birds. Because he couldn’t lift the cup with one hand and insert the ball with another, the routine required a mechanical device—of Buchinger’s invention—that demanded special skill to obscure it from the audience. “It’s speculative in terms of specifics,” says Jay, “but quite wonderful to think about his ability.”

Over the years, Jay has amassed a large collection of Buchinger’s works, about 30 of which were featured in a show earlier this year at the Metropolitan Museum of Art in New York City. Eric Altschuler of Temple University, who studies the role cognitive neuroscience plays in rehabilitation, read a review of the show and decided to check it out.

Altschuler was struck by Buchinger’s micrography. “He’s got like nanocalligraphy, not micro. It’s very hard to see,” he says. “What’s more interesting is not how you see it, but how does he draw it?”

The way the brain organizes control of our body parts may be less about the anatomy—hand, mouth, foot—and more about the job—manipulating objects, eating, kicking.

Jay says Buchinger did not use his mouth to create his drawings, but his stumps alone, which were not perfectly smooth, but had some contours. What gave him such dexterity with his stumps, Altschuler proposed in a recent Current Biology essay, was (in addition to talent and most likely a good mentor) a rejiggering of his cortical mapping—a reassignment of brain areas normally given to motor control of the hands and feet (20:R228, 2016). “The stump can go take possession of that territory,” says Alschuler. “And since it’s from birth, it will happen early and automatically. That must be his secret sauce.”

“This has been the case in the literature for so long,” says the University of Oxford’s Tamar Makin, who studies brain reorganization among people who are missing body parts. “Cortical neighbors take over when you have a missing input.”

The phenomenon might not be limited to just adjacent cortical regions, such as those controlling the arm and the hand, but could include body parts more distantly represented in the brain. The motor cortex is a strip of brain tissue running from the top of the head down toward the ear. The mouth, for instance, is controlled by an area more lateral (further down the side of the head) than the hand region, and the two are separated by control centers for other body parts. Yet the mouth’s control area may also take over the hand region if the person uses the mouth to compensate for the missing hand.

Using fMRI, Cathrin Buetefisch, a neurologist at Emory University School of Medicine, has examined the cortical mapping of people born without hands who use their feet with exceptional skill. She found the “foot” areas of the brain both in the typical foot spot of the cortex—located near the top of the head and deeper into the brain, away from the skull—and also several centimeters (and body parts) away in what is usually the hand area (PNAS, 106:2395-2400, 2009).

Disrupting the hand area of the brain with transcranial magnetic stimulation made those same subjects slower to wiggle their dominant toe in response to a visual signal. “That for me is really nice evidence that there is a causal relationship between how you process information in the hand area and how good you are with your feet,” says Makin.

Makin points out that the idea of the cortical map as one governed by body parts may be outdated. Rather, it’s the function of that body part that defines a particular cortical area. “It seems to me the explanation for all of this is: the hand area is not the area that represents five fingers, knuckles, and nails. It’s the area that represents body parts that we’re using in order to interact with objects in our environment,” Makin says. In other words, the way the brain organizes control of our body parts is less about the anatomy—hand, mouth, foot—and more about the job—manipulating objects, eating, kicking.

The idea is still speculative, but Makin and her colleagues have shown that how a person compensates for a missing body part is reflected in his brain. For instance, people who are born without one hand and who use the handless arm in everyday tasks have more symmetry across hemispheres in the functional connectivity of their cortical hand regions than those who favor their unaffected arm and hand (eLife, 4:e04605, 2015). “What we find is this reorganization scales with usage,” Makin says.

Makin is recruiting people in the U.K. who paint using a brush placed in their feet or mouths for a study of their cortical organization and how various body parts and functions are represented in their brains. From the evidence to date, it’s fair to expect their cortical maps to look different from those of people with normally functioning hands. Buetefisch says it’s likely Buchinger also did not have a normal cortical map, but “may have had a different representation of his legs and arms because of . . . being born without these target organs.”

Such an adaptive cortical map probably formed from birth, rather than by breaking down and reconstructing the wiring of a typical cortical landscape. “It’s not reorganization, it’s organization,” Buetefisch says.