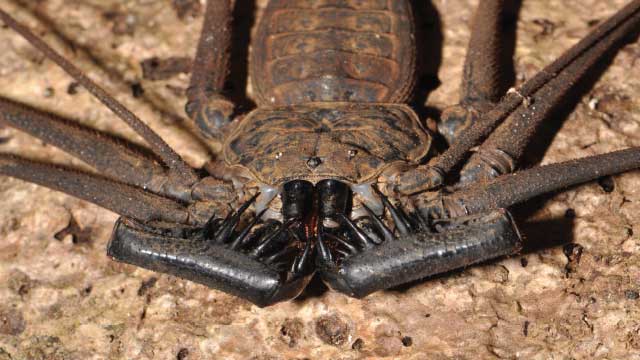 PEEP THOSE PEDIPALPS: In close proximity to its antenniform legs and mouth, Phrynus pseudoparvulus, has a formidable set of pedipalps, grasping appendages used to secure prey.RICH BRADLEY, OHIO STATE UNIVERSITY

Whip spiders, also known as tailless whip scorpions, are actually neither spiders nor scorpions. These strange creatures belong to a separate arachnid order called Amblypygi, meaning “blunt rump,” a reference to their lack of tails.

Little was known about whip spiders before the turn of this century, but a recent flurry of behavioral and neurophysiological studies has opened a window into their unique sensory world. Researchers have discovered that some of the more than 150 species engage in curious behaviors, including homing, territorial defense, cannibalism, and tender social interactions—all mediated by a pair of unusual sensory organs.

Like all arachnids, whip spiders have eight legs. However, they walk on only six. The front two legs are elongated,...

All aspects of a whip spider’s life center on the use of these legs, including hunting—whip spiders are dangerous predators, if you’re a small invertebrate that shares the arachnids’ tropical and subtropical ecosystems. When Eileen Hebets, a biologist at the University of Nebraska–Lincoln, recorded the prey capture behavior of the whip spider Phrynus marginemaculatus, she observed a well-choreographed pattern. First, the whip spider aimed one of its antenniform legs toward the prey. Next, it placed an antenniform leg tip on either side of the prey. Finally, it swung its antenniform legs out of the way and struck with its spine-covered pedipalps, a pair of grasping appendages in front of the mouth. “The way they move their legs is so graceful,” Hebets says. “Their movements seem intelligent. And they have this incredible repertoire of sensory capabilities along with interesting behaviors.”

I think they could provide a gateway into our understanding of the mechanisms underlying complex behavior and the neural structures important for learning and memory.—Eileen Hebets
University of Nebraska-Lincoln

One of those behaviors is territorial sparring. P. marginemaculatus battle by vibrating their antenniform legs at each other. The animal that keeps at it the longest wins the contest. Initially, it was thought that the opponents actually touched each other. But using high-speed video, Hebets showed that the antenniform legs do not come into contact. Rather, whip spiders position their antenniform legs just over the “knees” of their opponents’ walking legs, an area containing long, thin sensory hairs in a socketed base. Electrophysiological studies demonstrated that these sensory hairs are near-field sound receptors, able to detect moving air particles generated by an opponent waving its leg. When Hebets clipped off the sensory hairs, the duration of antenniform leg waving no longer predicted who won the contest (PLOS ONE, 6:e22473, 2011).

Other sensory hairs on the antenniform legs detect odors in the air, an unusual ability among arachnids. Recent experiments suggest whip spiders use their sense of smell to find their way home. Hebets, with Verner Bingman and Daniel Wiegmann of Bowling Green State University, captured Paraphrynus laevifrons whip spiders in Costa Rica. The researchers deprived some of them of vision by painting over their eyes with black nail polish. For another group of arachnids, sensory input from the tips of the antenniform legs was blocked with either nail polish or by trimming with scissors. Then the researchers glued miniature radio transmitters to the animals’ backs and released the experimental groups 10 meters from their home refuges. The whip spiders could generally find their way back without the use of their eyes. However, sighted individuals with compromised antenniform leg tips experienced a complete loss of homing ability (J Exp Bio, 220:885-90, 2017).

“On the tips of the antenniform legs are specialized olfactory receptors that respond to chemicals dispersed in the air,” says Bingman. “The most important sensory system for navigation appears to be olfaction, but it is unlikely that olfaction can explain the entirety of this remarkable navigational ability.” 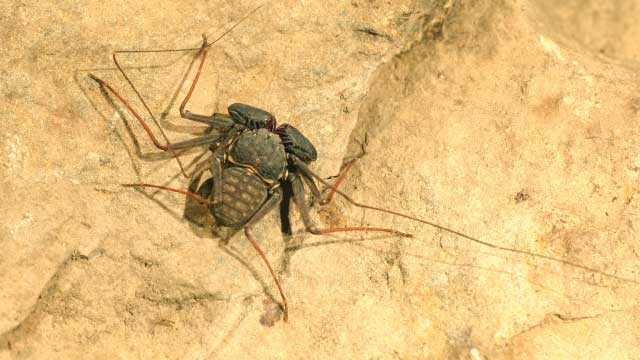 Whip spiders are eager to return to their refuges after a night out to avoid their many predators, including their peers. Cannibalism is rare in some species, while in others up to 20 percent of laboratory interactions end with one opponent eating the other.

University of California, Davis, biologist Kenneth Chapin found that a Puerto Rican species named Phrynus longipes is highly territorial. “They claim a small patch, maybe half a meter, and defend it from other whip spiders, just like a tomcat or a wolf pack might,” he says.

Much whip spider research supports the view that the arachnids lead solitary, aggressive lives. However, some research has painted these fearsome predators as gentle lovers. The whip spider courtship ritual can last up to eight hours and involves ample antenniform leg stroking by each member of the pair.

Working with captive mother-offspring groups of whip spiders, Linda Rayor, an entomologist at Cornell University, has shown that some species are surprisingly social. After encountering a whip spider in Costa Rica, Rayor began keeping several species in her office. One day, Rayor noticed a mother sitting in “a sea of the waving whips of her youngsters.” The group gently interacted using their sensitive antenniform legs. “I had never seen arachnids do what was essentially a totally amicable behavior,” she says. “I was charmed and hooked.”

Rayor’s research on two species—P. marginemaculatus from Florida and Damon diadema from Tanzania—suggests mothers and siblings form close groups for about a year before the young reach sexual maturity. “They largely sit within whip length of one another so that they are in constant contact,” she says.

Despite all the recent studies detailing whip spiders’ fascinating behaviors, little is known about their brains. A structure called the mushroom body is particularly large and convoluted in whip spiders. Mushroom bodies are higher-order brain regions that, in insects and other invertebrates, are associated with information processing, learning, and memory. Whip spiders have the largest mushroom bodies, relative to their size, of any arthropod. But it is not clear exactly what these structures do in whip spiders or how sensory information from the antenniform legs is involved.

“The fact that whip spiders have this unusual central nervous system and associated sensory systems makes them excellent study subjects,” says Hebets. “I think they could provide a gateway into our understanding of the mechanisms underlying complex behavior and the neural structures important for learning and memory.”