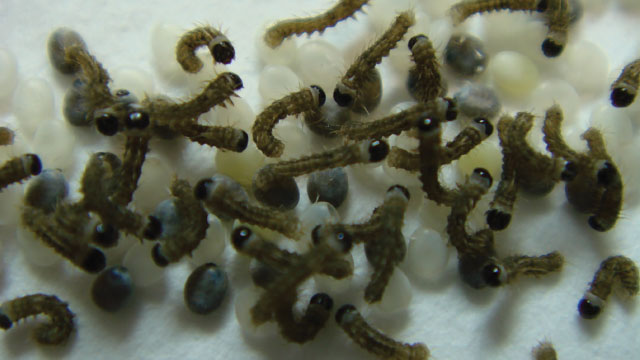 SILK MERCHANTS: With the help of inserted spider genes, these newly hatched transgenic silkworms can spin silk that is closer to that spun by arachnids.IMAGE COURTESY OF KRAIG BIOCRAFT LABORATORIES

In Jon Rice’s office is a small incubator full of tiny insect eggs—one of many such incubators kept at Kraig Biocraft Laboratories (KBL), the Michigan-based polymer development company where Rice is chief operations officer. From these eggs will hatch tiny silkworms, caterpillars of the domesticated silk moth Bombyx mori, which will then set to chomping down on mulberry leaves and preparing themselves for the demanding task of spinning silk cocoons to pupate in just a few weeks later.

But these are no ordinary silkworms, a fact you might notice “if you know what you’re looking for,” Rice says. For a start, “the eyes and the feet of our silkworms glow, if you look at them under...

The glow comes courtesy of a fluorescent protein used as a marker to confirm that several genes for spider-silk proteins have been successfully edited into the silkworm genome. Unlike regular domestic silkworms, which are reared in teeming millions around the world to spin fibers for use in clothing and furnishings, KBL’s stock is raised to produce what the company hopes may be one of the toughest fibers on earth.

Combining strength comparable to that of steel with an elasticity per weight that rivals rubber’s, spider silks have some of the highest measures of toughness—a reflection of the energy needed to break the material—of any fiber out there, beating the sturdiest man-made fibers such as nylon or Kevlar several times over. “Spider silk is unique,” Rice says. “We can’t recreate that synthetically.” Researchers have long touted uses for such a material in varied applications, including parachute cords, high-performance sportswear, and, thanks to spider silk’s unusual biocompatibility, suture thread.

However, obtaining silk from spiders presents a considerable challenge. For a start, spiders’ webs consist of multiple types of silk—not all of which have desirable mechanical properties. Worse, “spiders have two personality defects,” explains Randy Lewis, director of the Synthetic Bioproducts Center at Utah State University, and one of the inventors of the first spider silk–spinning transgenic silkworm. “They’re both cannibalistic and territorial. Unlike silkworms, where you just throw a bunch of them in, and they eat and keep perfectly happy, spiders want to have a certain amount of room and will kill to keep that room.”

Consequently, the last few decades have seen multiple attempts to take live spiders out of the equation. At KBL, “we think the silkworm approach is the best way forward,” Rice says. “Silkworms make silk. That aspect is fully understood. The only challenge we have is changing the recipe.” The company has created 20 transgenic lines of silkworms that spin cocoons containing spider silk proteins. Dragon Silk, one of the latest products made from the fibers of these cocoons, is stronger than steel and tougher, lighter, and more flexible than Kevlar (though it has slightly lower tensile strength than this synthetic fiber). The company now holds a million-dollar contract with the US Army, which is exploring possible uses in defensive clothing and other gear. 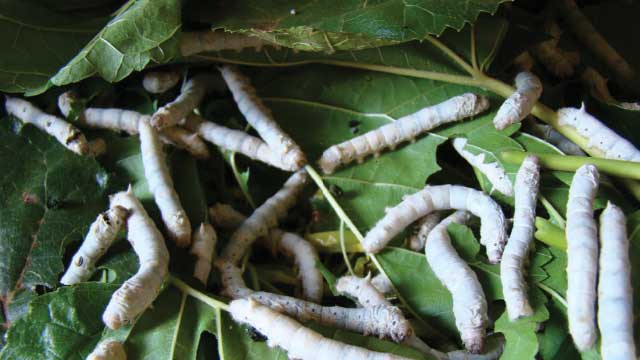 But some researchers point out that the transgenic silkworm approach has its own pitfalls. “Silkworms and spiders do make silk in different ways,” says Karolinska Institute silk researcher Janne Johansson. Silkworms spin thicker fibers than arachnids do, and add their own proteins in addition to the fibers themselves. For example, their silk contains a protein called sericin, a gluey substance that sticks fibers together in the cocoon, Johansson says. “You need to treat silk from Bombyx before you use it for anything.”

The internal spinning machinery differs between the two organisms too. In a spider’s silk gland, unspun silk, or “dope,” passes through a pH gradient, gradually being exposed to more-acidic conditions that help silk proteins aggregate. Silkworms also have a pH gradient, “but it’s less pronounced,” Johansson says.  “To the extent that spider silk proteins are optimized for experiencing this more extensive pH gradient in the spider silk gland, it will not work [the same way] in the silkworm.”

Several research groups have turned to other organisms to produce spider silk proteins. Lewis’s group made headlines in the 2000s with the creation of transgenic goats whose milk contained large quantities of silk proteins usually made by the arachnids. Other approaches include the creation of transgenic tobacco plants, potato, alfalfa, yeast, and biology’s go-to bacterium, E. coli, which is “simple, easy, and cheap to scale up,” says Thomas Scheibel, a biomaterials researcher at the University of Bayreuth in Germany. “It’s a nice system.”

Of course, without a spinning host, researchers have to spin the silk themselves. After tweaking the proportion of silk proteins expressed in E. coli, Scheibel’s group recently used wet-spinning—drawing fibers from silk proteins that have been allowed to self-assemble in a bath of water and alcohol—to make fibers with a toughness comparable to that of natural spider silk, albeit with lower tensile strength (Adv Mater, 27:2189-94, 2015).

And earlier this year, Johansson, along with Karolinska Institute collaborator Anna Rising, published an approach that mimics pH changes in a spider through what Johansson calls “an almost embarrassingly simple setup.” After keeping a highly concentrated solution of E. coli–produced recombinant silk proteins at pH 7.5, “we pump it through a narrow capillary and out into a beaker filled with buffer solution at pH 5,” he says. “That turns it almost instantaneously into a silk fiber that we can reel up.” The result is the toughest artificial spider silk fiber so far (Nat Chem Biol, 13:262-64, 2017).

At this rate, scaled-up, cheap production of reliably tough, recombinant silk fibers may be only a few years away. “We feel pretty good about it,” Lewis says. “Do we have the same properties as spider silk? No. Are we close? Yes.” The key now, as many researchers see it, will be finding the right applications for these fibers once they’re made. “You have to look for, ‘Where does silk give us the boost?’” says Scheibel, whose spinout company AMSilk also works on non-fiber spider silk applications, such as biocompatible coatings for silicone breast implants and 3-D–printed scaffolds for biofabrication. “Not just, ‘I make a product because I can do it.’”

Lewis agrees. “The unique property of spider silk is a combination of elasticity and strength,” he says, adding that many purported applications are likely to add little value by incorporating the fibers. “I guarantee you I can make a bulletproof vest—it’s just going to stop the bullet on the wrong side of your chest. If you just want strength, use Kevlar.”