Early investigations of the microbial communities in and around sunken boats reveal that there are patterns to where bacteria settle.

Armed with a battery-powered underwater drill, maritime archaeologist Nathan Richards ducked his face into the Atlantic Ocean. It was a sunny afternoon in September 2017, and Richards was standing in waist-deep water atop a wrecked ship called the Pappy Lane, which ran aground off the coast of North Carolina in the 1960s. With students looking on, Richards peered through his mask and skillfully applied pressure to push the 1.5-inch circular drill bit into the ship’s steel hull under his feet. As the director of maritime studies at East Carolina University (ECU), Richards had studied hundreds of shipwrecks over the years, and had even drilled core samples of some, but this was the first time he’d gone in search of microbes.

Richards has been interested in this particular wreck for the better part of the past decade. His exhaustive investigation—funded primarily by the North Carolina Department of Transportation because a planned bridge project would run right by the wreck—revealed it to be an amphibious assault vessel from the Second World War that had apparently been converted to an oil barge before being intentionally run aground to help rescue some other barges stranded in a storm.

We’ve always known that there’s a microbial component to corrosion.

Despite having been sitting on the seafloor for just half a century, the wreck is extremely corroded compared with other sunken vessels in the area, Richards notes. Like many marine archaeologists, he has studied the galvanic corrosion known to occur on shipwrecks as the boats’ metals exchange electrons with one another once submerged in the conductive seawater. “But that’s an electrochemical process that doesn’t really take into account all that much microbes. . . . And [we’ve] always known that there’s a microbial component to corrosion.” So this time, Richards was drilling for microbes to see if he and his students could shed light on the Pappy Lane’s particularly rapid deterioration.

Along with ECU microbiologist Erin Field, Richards and his students drilled a total of six core samples of the ship’s steel hull—containing both the metal structure itself and the concrete-like layer of bacteria and their secretions on either side—from the bow to the stern. The team also collected pieces of loose debris from the ship, as well as seawater and sediment samples, all of which were placed into a cooler for the trip back to the lab for genetic analysis.

The data revealed pronounced differences in microbial communities—in terms of both the species makeup and the metabolic functionalities—on the different materials of the shipwreck and in the surrounding water and sediment. “I often think about it in terms of the human micro-biome,” Field says. “We have microbes that live all over and in our bodies, but you won’t find the same microbes in your gut that you will on your skin because the environments are different.” 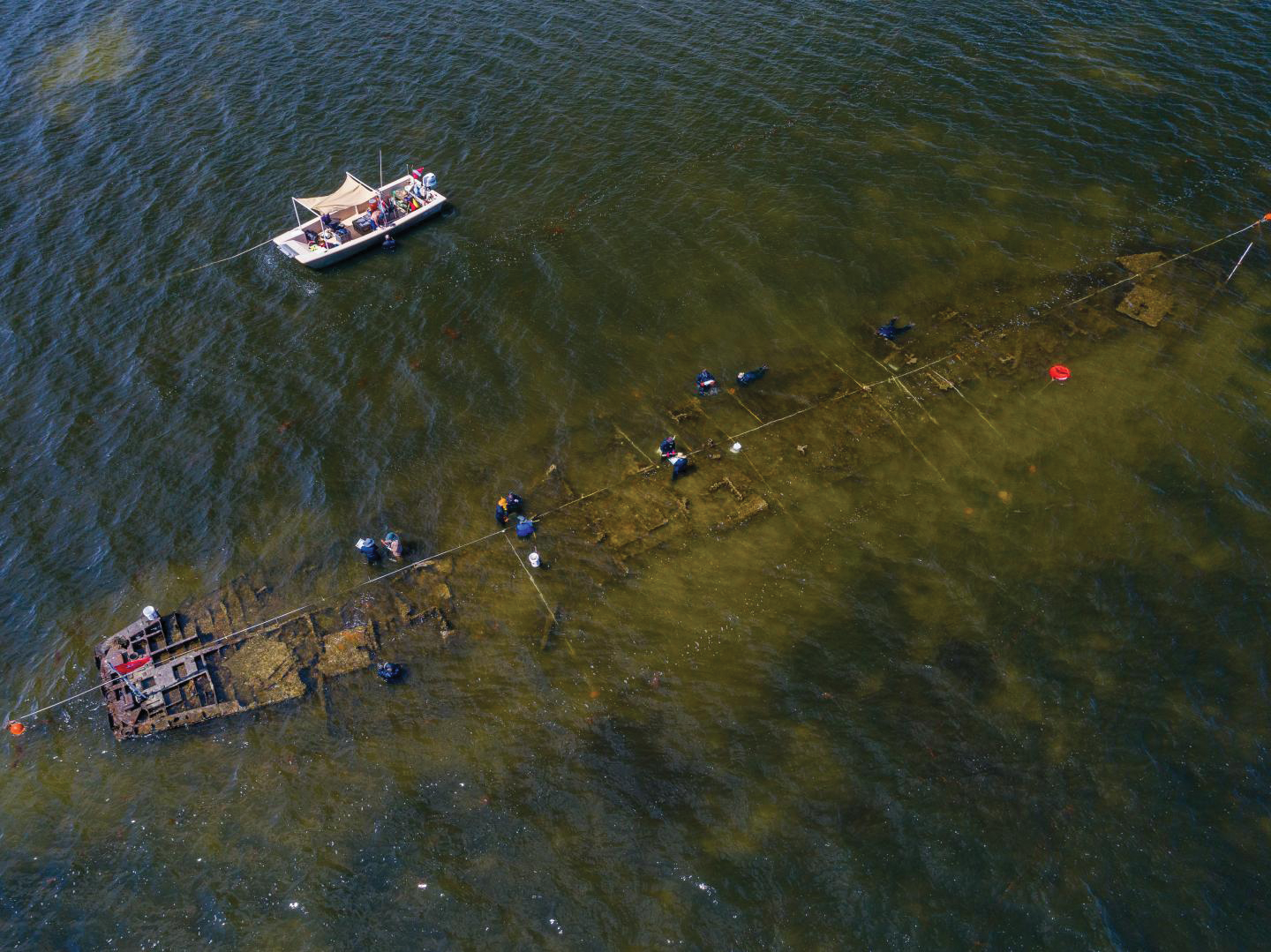 A BOAT FULL OF BUGS: The Pappy Lane was intentionally run aground in the 1960s off the coast of North Carolina. Now it’s home to a diverse community of microbes.
JOHN MCCORD, UNC COASTAL STUDIES INSTITUTE

Field was particularly interested in how iron-oxidizing bacteria, which eat iron from the ship’s metal and produce rust as a waste product, were contributing to the Pappy Lane’s deterioration. In the lab, Field and her team cultured bacteria from the debris and core samples and found that iron-oxidizing bacteria such as Zetaproteobacteria were present in every sample, and particularly abundant in samples with visible rust. “It’s possible that their presence could indicate early detection for future corrosion,” Field says. She also notes that Zetaproteobacteria, as some of the first to settle on shipwrecks, may make the environment more hospitable to other microbes. For example, they deplete the immediate surroundings of oxygen, possibly inviting sulfate bacteria that grow well in anoxic conditions to further corrode the ship’s steel, Field speculates.

The findings could have implications for preservation strategies not just for shipwrecks, but for any aquatic steel structure, she notes. “Most [current] preservation methods are not accounting for the microbial role . . . so we’re still missing that piece of the puzzle. And we’re finding that microbes are definitely affecting the deterioration or preservation of these wrecks.”

The University of Southern Mississippi’s Leila Hamdan, who has been studying the microbiomes of deep-sea wrecks for a decade but was not involved in the Pappy Lane work, says that it’s exciting that the team was able to take core samples to search for microbial life on the shipwreck itself. “In that way, you can ask those really specific questions of: How does microbial life exist on these human-made surfaces?” She adds that she was not surprised that the microbial communities varied in and around the wreck. “We definitely see parallels there,” she says of her work on deep-sea wrecks. Analyzing samples of the surrounding sediment, her team recently found an increasing abundance of cellulose- and hemicellulose-degrading bacteria with proximity to two newly discovered wooden wrecks—one around 500 meters deep and the other nearly 1,800 meters down—in the Gulf of Mexico, says Hamdan, who presented the data at the Ocean Sciences Meeting in San Diego in February.

Hamdan joins Field as one of the few microbiologists to focus on shipwrecks. In her first such project, Hamdan and colleagues navigated a remotely operated vehicle to six Gulf of Mexico wrecks, all located between 140 meters and 2,000 meters deep, to collect samples that could help them understand the effects of the 2010 Deepwater Horizon oil spill on the microbes in and around the wrecks. She’s also studied how the shipwrecks themselves affect the microbial communities surrounding them. Most recently, she and her team placed pieces of wood near wrecks in the deep sea that they later retrieved, using an acoustic signal to trigger a flotation device to bring them to a research vessel at the surface, to see what microbes had grown on them.

The results support the idea that the composition of microbial communities changes with distance from wrecks, she says. “We’ve seen a . . . definitive signature of increased biodiversity in a ring around the shipwreck Anona,” a yacht that sank in the Gulf of Mexico in 1944, “and we’re also seeing this pattern emerge around one of the two wooden shipwrecks that we studied last summer.” Hamdan says these results will be published soon.

Hamdan says it’s very likely microbes are playing a role in shaping macrofaunal communities at shipwrecks. “For you to be able to see any corals and tube worms and all of this gorgeous stuff that grows on shipwrecks, the microbes have to get there first.”