Researchers discover that bacteria break down medicinal compounds for their nitrogen, solving a mystery that has vexed aquatic veterinarians for years.

ABOVE: Veterinarians in charge of aquariums have been investigating the mysterious disappearance of antiparasitic drugs. © ISTOCK.COM, piola666

As a veterinarian in Disney’s Animals, Science, and Environment, M. Andrew Stamper is tasked with overseeing the welfare of hundreds of species of marine animals—and those are just the organisms he can see without a microscope. Add the bacteria and other microbes that form biofilms on the walls and pipes of tanks, and the number of species under his watch balloons into the thousands. “If you actually look at the bioload in an aquatic system, the bacteria either equals or outdoes the fish,” Stamper says, adding that while they rarely draw attention, microbes are essential to any healthy ecosystem; veterinarians ignore them at their peril.

Stamper was reminded of their importance in 2015, when he began noticing that the antifungal and antiparasitic drug formalin was disappearing from his quarantine tanks so quickly that it was useless as a treatment for fishes’ infections. The exponential decrease in drug concentrations suggested the cause wasn’t abiotic (temperature or light would have caused a linear decline), and fish density didn’t seem to make a difference.

Instead, Stamper hypothesized in a 2016 paper that bacteria were scavenging the drug, perhaps for its carbon or nitrogen or to harness energy from the chemical bonds. While researchers have long understood that microbes form diverse communities, and that each individual battles others for resources, the thought that they might be able to influence drug concentrations to such a large extent “wasn’t an idea that was floating around in our circles at the time,” Stamper says. He notes that most aquarists considered bacteria only in the context of the “good” species cultivated intentionally as so-called biological filters to metabolize ammonia shed by fish, and his suggestion that bacteria could influence the tank environment in other significant ways  “was very much a revelation,” he says.

We had a number of meetings trying to figure out why it was happening.

There wasn’t an easy way to directly test this idea at the time, as sequencing technology for surveying the tank’s microbiome wasn’t readily available, so Stamper continued to build a body of supporting evidence, ruling out other causes as best he could in publications documenting similar losses of the antiparasitic drug praziquantel. In that case, too, he proposed bacteria as a possible explanation after finding that praziquantel didn’t degrade in tanks that had been sterilized.

Mike Murray, the director of veterinary services at the Monterey Bay Aquarium, also suspected bacteria were to blame after he began noticing issues several years ago with degrading chloroquine, another antiparasitic that is also used as a human antimalarial drug. The aquarium had recently outsourced some of its quarantining to a nearby facility ahead of a new temporary exhibit of tropical species, which are prone to parasites. In collaboration with that facility’s team of aquarists, they saw that the drug was falling below therapeutic levels. “We had a number of meetings trying to figure out why it was happening,” says Murray, who, like Stamper, carried out a series of small experiments that ruled out an abiotic cause. While Murray didn’t publish his findings, he says they had “always been working on this assumption that there was bacterial degradation just because we couldn’t figure out another explanation for it, but none of us really knew how to go about validating that.” 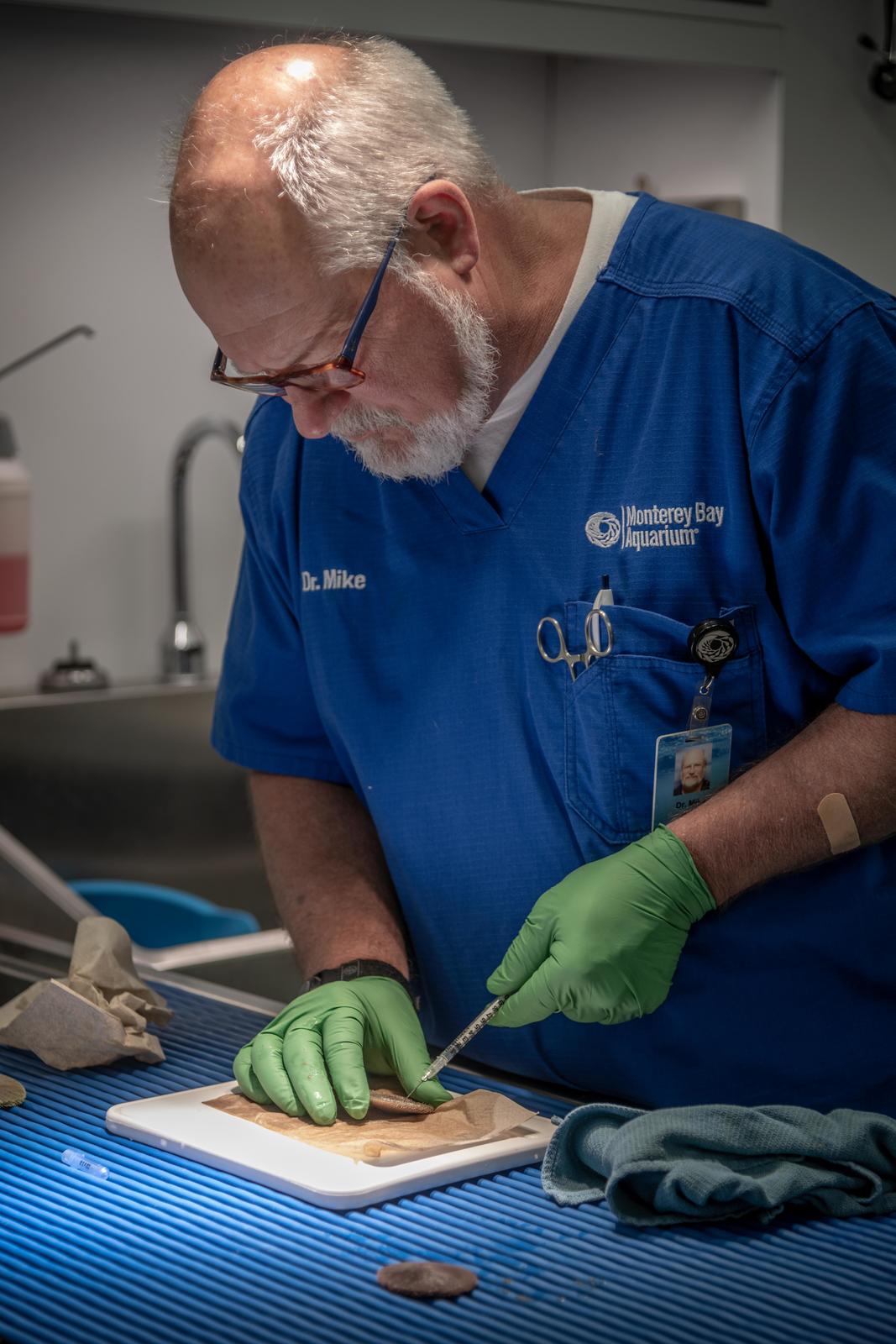 In the end, it would be another group that provided direct evidence that this was the case. Staff at Chicago’s Shedd Aquarium had noticed that chloroquine was degrading in their tanks, too, and Bill Van Bonn, the aquarium’s vice president for animal health and welfare, tells The Scientist that he was aware of Stamper’s and Murray’s work hinting at a microbial cause. The accumulation of evidence, both published and anecdotal, prompted him to partner with Erica Hartmann, an environmental microbiologist at Northwestern University, for a series of experiments.

Staff at Shedd collected swab samples from the walls and pipes of several tanks, as well as water samples, and sent them to Hartmann, who calls this “one of the most fun projects I’ve ever worked on.” She used metagenomic sequencing to reveal almost 800 different bacterial genomes in all. When the researchers cultured the samples they’d collected and offered them chloroquine, they found that around 20 of those 800 genomes—whose sequences placed them in the phyla Actinobacteria, Bacteroidetes, Chloroflexi, and Proteobacteria—seemed to be associated with chloroquine degradation. Bacteria in these phyla were typically detected in greater abundance in experimental tanks where chloroquine was disappearing, and were also more common in samples taken from outflow pipes at Shedd Aquarium. Plus, when cultured on plates with only chloroquine for food, samples rich in these phyla were better at metabolizing and assimilating the drug than were other samples.

Initially, Hartmann suspected the microbes were using chloroquine for carbon. “When I looked at the molecule [structure], I saw a bunch of carbon, and there’s a lot of energy trapped in the bonds.” But when she examined  specific genes in the 20 genomes flagged by her previous analysis, she found that many were involved in pathways related to nitrogen breakdown. Specifically, it appeared that the microbes were cleaving off a nitrogen-containing amine group as a source of food, which she verified by studying the degraded product.

To confirm exactly which species were doing this and how, the team could use fluorescently labeled isotopes to track uptake of the drug directly and monitor the different breakdown products, says Pia Moisander, a marine microbial ecologist at the University of Massachusetts Dartmouth who was not involved in the work. “They may find that it’s not just the one drug, but that . . . bacterial and enzymatic processes are attacking different breakdown products too.” She adds that she wasn’t surprised by the implicated phyla, however, calling them the “bread and butter of marine microbial communities” that are found in most types of samples. While the team chose to focus only on phylum-level patterns in their paper (a common practice among exploratory experiments of this sort), Moisander says that it could be worth the cost and effort to dig further down into the microbes’ taxonomy. 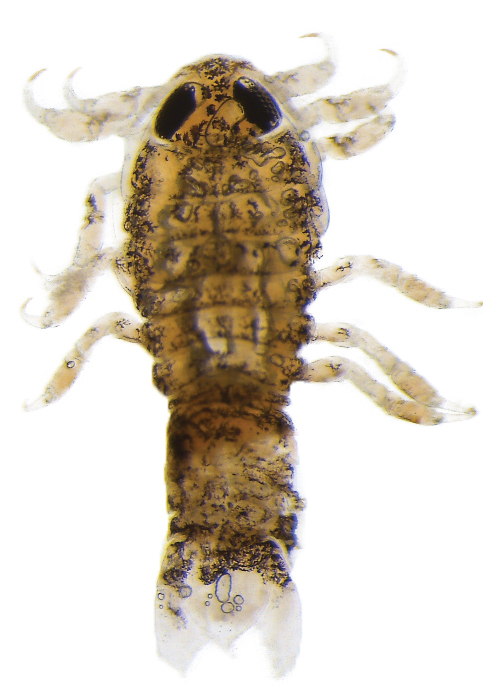 AQUARIUM BUG: Researchers have documented several instances in which medications added to tanks to treat fish for external parasites, such as this isopod, were disappearing after being metabolized by bacteria.
Emily Oven

Species-level resolution might help explain why degradation happens in only some tanks, or only sometimes, and resolve some remaining mysteries. Murray notes, for example, that in contrast to the nitrogen-free compound formalin, chloroquine seems to disappear more often in tanks with fewer fish than in crowded tanks. He speculates that if a tank’s animals are too few, low levels of ammonia could give drug-eating species a competitive edge. Moisander points out that while some tanks may become populated with bacterial species that can already break down nitrogenous compounds, other species can also acquire the ability to consume drugs, perhaps through mutations or gene exchange. Murray and Van Bonn say that being aware of this fact has made them consider more critically what drugs have previously been added to a tank.

As for solutions to drug-grabbing microbes, aquarium veterinarians have only a few options. For smaller tanks or those that only house animals for a short period, many aquariums use bleach—typically hydrogen peroxide—to clean pipes and surfaces between treatments, restarting the microbiome each time to keep the unwanted nitrogen-utilizing species from gaining a monopoly. In larger tanks, aquarists will instead flood pipes with fresh water every few months to kill the encrusting organisms before scraping the pipes with a torpedo-shaped tool called a pig.

Murray started temporarily removing the biological filters for fish-excreted ammonia once the drugs are added to boost the level of nitrogen, thus supplying food to hungry bacteria that might otherwise go after the drugs. The Shedd Aquarium, meanwhile, is teasing apart its microbial communities as part of its Aquarium Microbiome Project to see whether there are types of bacteria that can outcompete the drug-stealing varieties. Stamper, for his part, has since moved away from studying bacteria, but says that he is happy to see these other groups take over and apply more-modern tools to the issue, telling The Scientist, “I’ve come through with a whole new respect for the microbial community.” 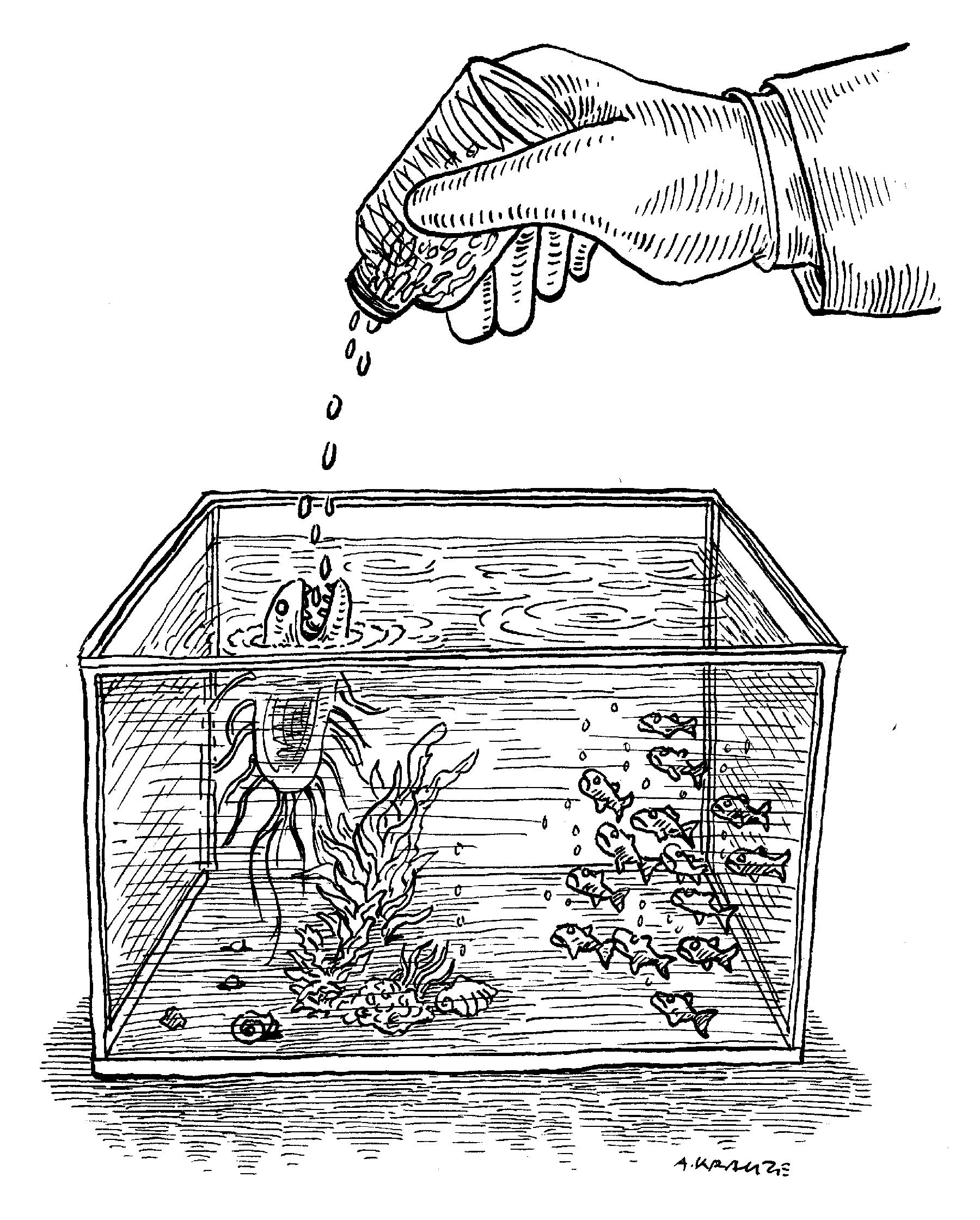