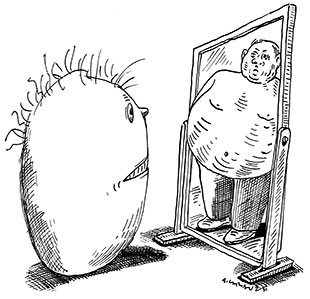 ANDRZEJ KRAUZEA decade ago, gut microbiologist and genomicist Jeffrey Gordon’s postdoc Fredrik Bäckhed at Washington University in St. Louis made a startling discovery: adding gut microbes from normal, healthy mice to germ-free mice significantly increased the latter’s body fat (PNAS, 101:15718-23, 2004). This finding prompted another of Gordon’s postdocs, Ruth Ley, to suggest that University of Colorado computational biologist Rob Knight apply his new microbe-comparing computational tools to obese and lean mice. “I thought it seemed like a long shot” that they would see significant effects, recalls Knight, now at the University of California, San Diego, in an email. The long shot paid off, however, with a 2005 paper in PNAS that found that obese and lean mice indeed had different gut microbiomes (102:11070-75). The insight ultimately launched deeper investigations into the relationship between the microbiome and obesity.

The differences in bacterial diversity that Knight and...

We are at the beginning of the story of understanding what we have in terms of bacteria, metabolic function, metabolites, and how all these different factors contribute to regulate energy homeostasis. —Patrice Cani,
Catholic University of Louvain

The most straightforward explanation is that certain microbes are better at gleaning nutritional value from the foods we eat and stimulating storage of the subsequent energy as fat in the body. Scientists have long known that microbes can digest the complex polysaccharides of fiber that we can’t, but did not suspect that the bacteria also processed other ingested macromolecules, says microbiologist Peter Turnbaugh of the University of California, San Francisco. Yet recent work by John Rawls, a microbial ecologist at Duke University, has suggested that the microbial composition of the zebrafish gut influences that animal’s absorption of fat, while diet in turn influences microbial composition (Cell Host Microbe, 12:277-88, 2012).

While processing the food we ingest, gut bacteria produce metabolites that feed the body and enter the bloodstream as signaling molecules. Certain bacteria are particularly good at making the beneficial short-chain fatty acid (SCFA) butyrate, which provides energy for the gut and strengthens the intestinal barrier to prevent unwanted chemicals from leaking into the bloodstream, according to immunologist Amanda Cox of Griffith University in Queensland, Australia. Butyrate can also control appetite in mice lacking the immune receptor TLR5, Knight adds.

The role of microbial metabolites is not completely understood, however, because other SCFAs are believed to be harmful, Cox says. SCFAs made by bacteria subjected to a high-fat diet appear to weaken the gut lining. At the same time, the high-fat diet itself both further lessens the gut epithelial barrier by increasing its permeability and supports the active transport of bacterial components from the gut into the bloodstream. “It’s a bit of a double whammy,” Cox says. The overall effect is a phenotype often correlated with obesity: systemic, low-grade inflammation.

It’s unclear how much the obesity-associated microbiome—and the correlated changes in energy harvest and inflammation—contribute to the onset of obesity, or whether they are instead consequences of excess body fat. Nevertheless, scientists are already playing with the microbiome in an attempt to reverse the disease. “There are quite easy ways to manipulate the microbiome,” Cox says. “How efficacious they are, how big their impact is, we’re still trying to tease that out.”

Prebiotics, or dietary supplements that promote bacterial growth by providing an energy source indigestible by the host, and probiotics, live bacterial cultures embedded in pills or yogurt, are both relatively cheap and available. Prebiotics have been shown to change the composition of the gut microbiome, improve glucose tolerance, and lower the levels of blood triglycerides and body fat in rodents, says metabolic biologist Patrice Cani of the Catholic University of Louvain in Belgium. More recently, researchers have shown that prebiotics have a similar effect to gastric bypass surgery in increasing the number of microbes of the genus Akkermansia, which are thought to be beneficial for maintaining a healthy weight. As a result, Cani will be testing Akkermansia supplementation in obese patients in a clinical trial beginning at the end of this year. Meanwhile, probiotics have yet to be rigorously tested as an obesity treatment in large-scale trials, Knight says.

Other researchers have investigated more controversial options. In animals, and in some human epidemiological studies from the lab of microbiologist Martin Blaser at the New York University School of Medicine, antibiotic treatment early in life appears to correlate with obesity. On the other hand, Cani has demonstrated that high doses of antibiotics can suppress diet-induced obesity, at least in animal models. There is also some evidence that fecal transplants can alter insulin sensitivity and possibly body weight, according to Knight. “Whether or not that’s ultimately the way in which we want to manipulate [the microbiome in] humans is up for debate,” Turnbaugh says. “It will be a while until we can guarantee that there’s not going to be any side effects.”

The microbiome’s mysterious role as cause or consequence of obesity highlights the disease’s complexity. “We are at the beginning of the story of understanding what we have in terms of bacteria, metabolic function, metabolites, and how all these different factors contribute to regulate energy homeostasis,” Cani says.

“Obesity as a simple disease associated with change in the gut microbiota because of dietary habits is, for me, too simple. I think that we have to have a broader view,” he adds. “We still have a lot of work to do.”