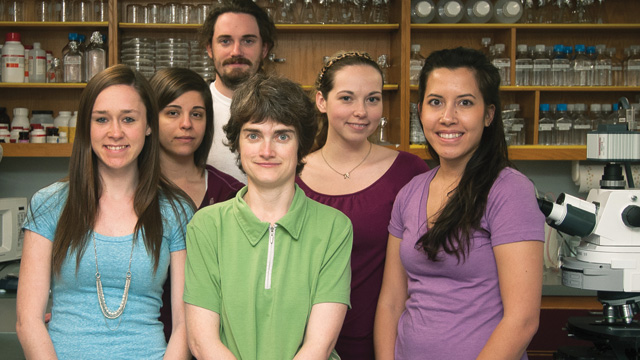 In the hours before they get hitched, some grooms eat, some pace, and some watch TV. Chris Murphy was in the lab.

While his bride, Brooke—a hairstylist he met while managing a pizza parlor next door to the boutique where she worked—prepared for the big day, Murphy prepared for his next experiment, plating and transfecting HeLa cells for subsequent photobleaching.

Cell culture is one of those tasks that is tough to entrust to others, Murphy explains, “as an infection can be costly.” But there were other upsides: “It was the only time I was alone the entire day,” he recalls. “It was kind of nice.”

Murphy’s wedding day was, in fact, his 300th consecutive day in the lab. Such dedication would be remarkable in...

His boss was Michael Davidson, who runs a microscopy laboratory at FSU’s National High Magnetic Field Laboratory. The lab is a powerhouse, sporting more than 25 members and some 30 microscopes, seven of them top-of-the-line confocals. Focusing on live-cell imaging and the development and characterization of fluorescent proteins and molecular sensors, Davidson and his team have churned out more than 50 publications in the past decade, as well as microscopy-focused educational Web content for instrument manufacturers Nikon, Zeiss, and Olympus.

These days, Davidson staffs the place with people like Murphy—smart, hard-working twentysomethings who struggled in school and could use a break. “At my age, I don’t need more papers,” Davidson says. “I need to give something back, and that’s my way of doing it.”

Davidson exposes his recruits to what he calls “boot camp,” a no-nonsense environment in which they are expected to clock in daily at 8:30—not 8:45—work hard, and by the end of their tenure get a few publications. Most make it, a few don’t.

Davidson admits that he’s a micromanager, but claims to be no harder on others than he is on himself: he works 12 hours a day, 7 days a week. And Murphy, he says, was similarly driven. Tasks in Davidson’s lab run the gamut from washing dishes and feeding cells to cloning fluorescent proteins and doing microscopy. Yet he also encourages his employees to read and be independent. He trains them, but many techniques are self-taught.

The wage for that work is about $8.50 an hour, which Davidson pays out of the profits from his website contracts and photomicrograph royalties. For Murphy, a $7/hour starting salary was actually a pay cut, he says, but a worthwhile one. “It’s a bummer to make pizza for a living,” he explains. “I have an extremely active mind.” By the end of his tenure in Davidson’s lab, Murphy made $37,000 a year as a senior microscopist and had coauthored six publications. His experience helped get him his current job as a regional sales manager for microscopy camera company Photometrics, where he now makes “six figures.”

Davidson lab alumna Ericka Ramko had a similar experience. After graduating FSU with a bachelor’s degree in human sciences and “zero lab experience,” she worked at a local newspaper, but wanted get back into science. In her three and a half years in Davidson’s lab she became an expert in microscopy, tissue culture, and cloning, publishing papers in PLoS Biology and Nature with the likes of Roger Tsien and Clare Waterman. Ramko now works as a life science specialist at global lab supply company VWR, where she makes three times the salary she made in Florida.

Davidson’s lab, Ramko says, was intense, and new recruits face a steep learning curve. By all accounts Davidson is not the warm and fuzzy type. He’s direct and exacting, demanding excellence and hard work. “I describe these techs as an extension of myself,” he explains. Yet the ones who do best, he adds, are those who come to realize they really are working for themselves, not Davidson. “You have basically unlimited microscopy equipment, unlimited graphics capabilities, one of the best live-cell imaging labs on the planet, and the world’s largest collection of fluorescent proteins,” he says. “Try to take advantage of it.”

Current lab member Paula Cranfill, an FSU biological sciences graduate, has been in the lab nearly two and a half years and published three papers. She typically works between 45 and 55 hours a week, but lately it’s been closer to 80 as she finishes up photobleaching studies with Vanderbilt University researcher David Piston. For Cranfill, that time is an investment: she wants to do graduate work with Piston, and is hoping her experience in Davidson’s lab will make her a better candidate.

That’s precisely the outcome Davidson hopes for: that his techs give him a few good years, and snag a good job or career advancement in return. For many in the lab, the experience is transformative. Nathan Claxton, a senior biosystems applications manager with Nikon Instruments, worked with Davidson for 3 years. Before that, he served drinks at a local bar.

“I think about what I might have been doing if I didn’t find that [job] ad in the paper,” he says. “Would I still be bartending at the Moose Lodge? I don’t know. I just didn’t have much direction.”