ABOVE: Part of a colorized satellite image showing a milky sea (blue) off the coast of Java (urban areas illuminated) on August 2, 2019
COURTESY OF STEVEN MILLER

Rounding the southern tip of South America on the HMS Beagle, Charles Darwin stumbled onto a rare and astonishing natural phenomenon. “While sailing a little south of the Plata on one very dark night, the sea presented a wonderful and most beautiful spectacle,” he wrote in his account of the 1830s voyage. “There was a fresh breeze, and every part of the surface, which during the day is seen as foam, now glowed with a pale light. . . . As far as the eye reached, the crest of every wave was bright, and the sky above the horizon, from the reflected glare of these livid flames, was not so utterly obscure as over the vault of the heavens.” He had sailed through a milky sea.

They’ve been the stuff of legend for centuries: colossal glowing patches of ocean. Writers and scientists including Herman Melville and Jules Verne have described encounters with them and speculated as to their origins. In fact, the massive size of the phenomenon belies its source: tiny, bioluminescent bacteria, glowing when their community grows large enough. Unlike the transient flares of bioluminescent algae such as dinoflagellates, these bacteria hum with light for weeks at a time; a milky sea can take hours to sail through.

Even the largest of milky seas is a drop in the bucket, and thus far, they’ve always been discovered by chance.

From 1915 to 1993, according to mariners’ accounts published in the now-defunct Marine Observer, there were at least 235 sightings of milky seas—around three a year. Despite their seeming frequency, researchers still know very little about when and why milky seas form. The problem is finding them. For example, the Indian Ocean, the main region where milky seas are typically reported, is 70 million square kilometers and covers almost 20 percent of the Earth’s surface water. Even the largest of milky seas is a drop in the bucket, and thus far, they’ve always been discovered by chance.

But a paper published in Scientific Reports in July presents a tantalizing new possibility: spotting milky seas from space. Lead author Steven Miller, an atmospheric scientist, has been working on the problem at the US Naval Research Laboratory in Monterey, California, for more than a decade, he tells The Scientist, using satellite sensors to spot bioluminescence. It’s something the US Navy has long been interested in as a way to monitor the movement of ships, he adds, by looking for tracks through otherwise continuous patches of bioluminescence or by picking up flashes of bioluminescence triggered by that movement.

While searching for historical accounts in the Marine Observer, he stumbled across the 1995 account of the S.S. Lima, a British merchant vessel that spent more than six hours sailing off the coast of Somalia through a milky sea so bright that you could read a book by its light, Miller says. It seemed like a perfect test case.

Miller went to the satellite archives, and going off the reported coordinates of the Lima, searched for images of the right patch of Indian Ocean at the time of the account. At first, all he saw was a smudge on his computer monitor. Plotting the coordinates of the ship for the beginning and the end of the six-hour period described in the 1995 account, he found that they matched the edges of his smudge. That smudge was a milky sea, which Miller had tracked with imagery taken from 500 kilometers above the ocean.

It was an exciting achievement, but it wasn’t enough for an early-detection system to help researchers get to a milky sea in time. It had taken painstaking work, based on a well-mapped account, to find this one after the fact. The sensor wasn’t sufficiently sensitive to image milky seas with enough resolution that they could easily be distinguished from the rest of the ocean without the aid of firsthand accounts.

Miller got his break in 2011, when a new piece of equipment known as the Day/Night Band was installed on a satellite jointly operated by NASA and NOAA. A much more sensitive sensor designed specifically to capture low-light emission, the Day/Night Band stood a better chance of spotting the faint glow of a milky sea. Analyzing images constructed from sensor data from 2012 to 2021, Miller eventually found a dozen milky seas. The most spectacular of them, appearing off the coast of Java, Indonesia, in 2019, covered more than 100,000 square kilometers—a mass of bacteria the size of Iceland, the largest on record—and lasted for more than a month. 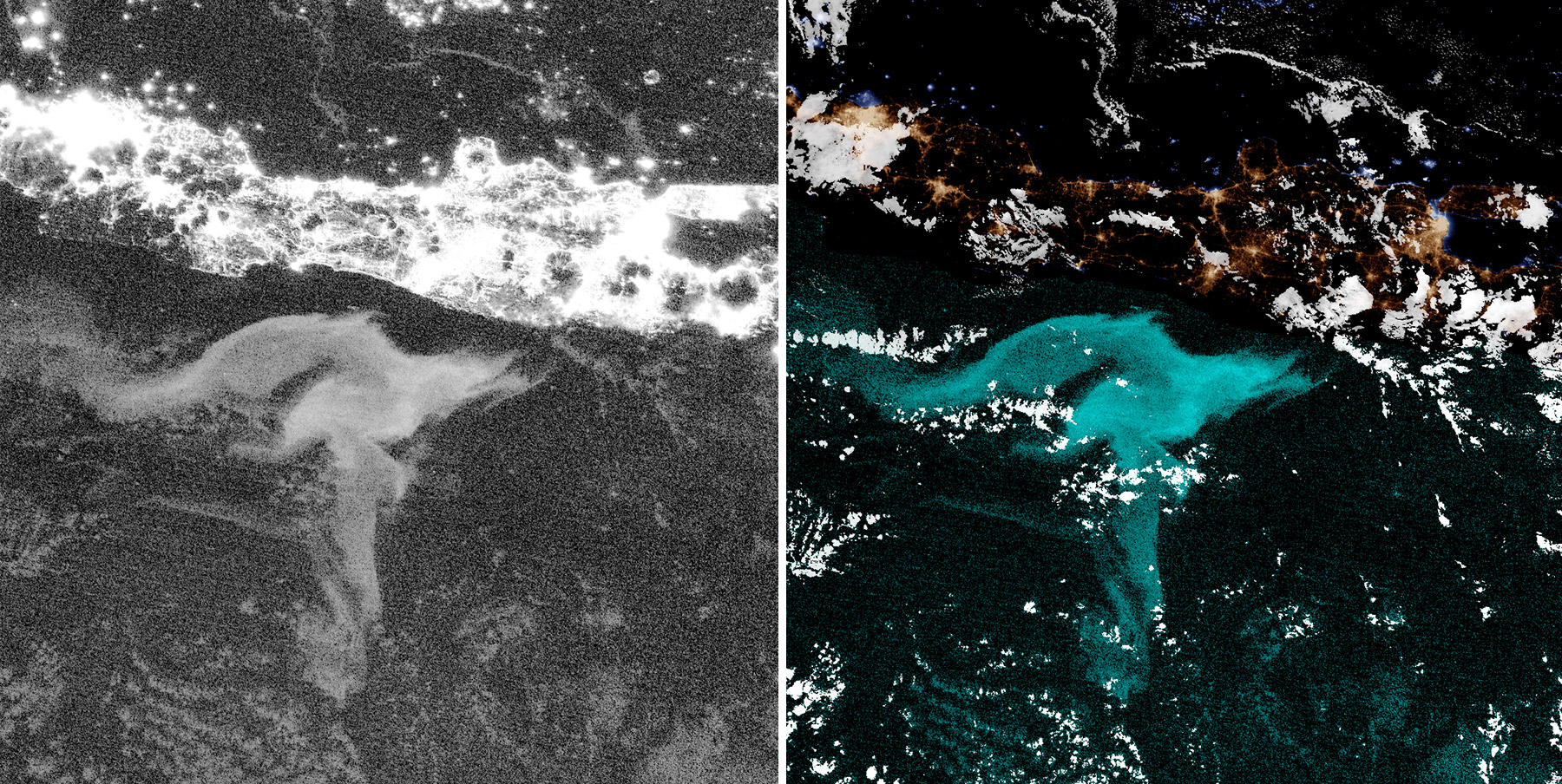 A satellite image of a milky sea (original on the left, colorized on the right) occurring off Java on August 4, 2019
cOURTESY OF Steven Miller

The team’s early-detection system may offer researchers the opportunity to add to what little is known about milky seas. Scientists think, for example, that the bacterium responsible for the bioluminescence is either a Vibrio species or one from a closely related family that forms huge colonies by feeding on blooms of a microalgae called Phaocystis. The glowing begins once there’s 100 million bacteria per square centimeter of water, Miller says, thanks to a phenomenon called quorum sensing that allows bacteria to coordinate group behavior according to population density.

Unlike dinoflagellates’ quick alarm-bell flare, which probably acts to frighten away predators or attract larger predators to frighten or eat the small ones, the bacteria in milky seas perhaps use their steady light to attract a fish to swallow them, Miller says. The inside of a fish is “a great habitat for them to continue growing,” he explains, much better than the tiny particle of food they were clinging to in the open water. “So that’s, we think, why they do that.”

Beyond that, mysteries reign, says microbiologist and University of Southern California professor emeritus Kenneth Nealson, who wasn’t involved with Miller’s research. In 1985, Nealson supplied sampling equipment to a research vessel that stumbled into a milky sea in the Arabian Sea; he’d been approached ahead of time by Navy scientist David LaPota, who asked Nealson to put together a sampling kit just in case the ship ran into one. The team did a good job with limited technology and time, Nealson says, and what they brought back a few months later was interesting, but not unexpected. 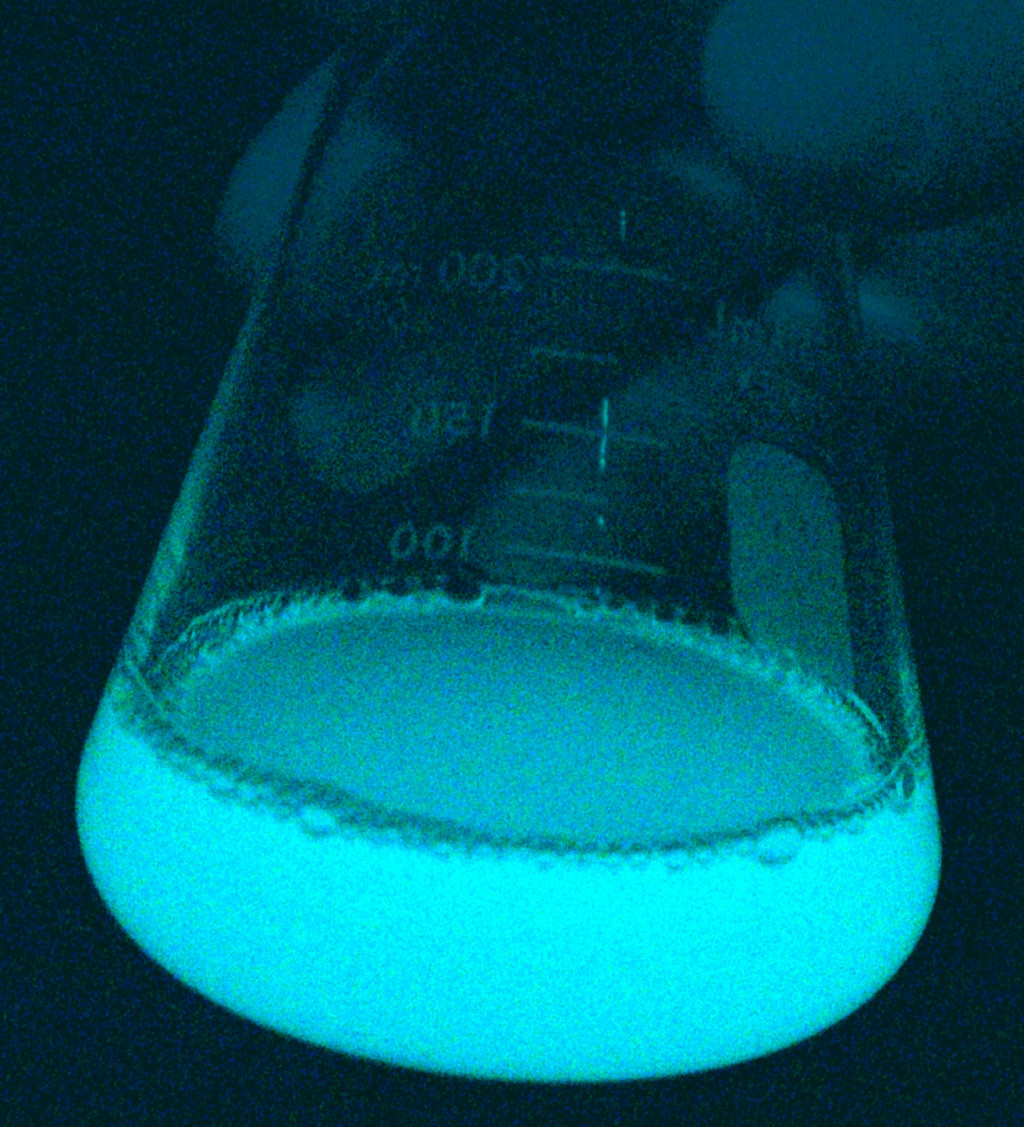 Bacterial bioluminescence from Vibrio fischeri, shown here cultured in a flask, could be the source of illumination in some milky seas.
COURTESY OF STEVEN MILLER

Specifically, the researchers identified Vibrio harveyi, a bioluminescent bacteria and a good candidate for the bioluminescence. However, that “just proves it was there when [the sample] was collected,” Nealson says. “[That] would be true of almost every marine sample you’d collect from a high-surface temperature water.” That study also found that biodiversity around the milky sea was much higher than inside it, suggesting just one species of bacteria is responsible for the glow in a given glowing patch of ocean.

There are almost as many questions swirling around milky seas as there are bacteria inside them, agrees US Naval Research Laboratory microbiologist Gary Vora. “You could count on two hands the number of papers in this space, and most are pure speculation,” he says. How they form, what species can make them, their effects on marine ecosystems, why they seem to occur primarily in the Indian Ocean, and how the bacteria build up enough to begin glowing are all as-yet unanswered questions, though there are ideas. In their new paper, for instance, Miller and colleagues propose the flask hypothesis: that natural pockets form in the Indian Ocean where little mixing of water occurs, letting the bacteria build up in one place.

The potential of the Day/Night Band to help answer these questions and more is hard to overstate, Vora says, adding that work is underway to launch an expedition that will take advantage of the new detection method. “The state of the art is such that if we find [a milky sea], we can throw the kitchen sink at it,” he says. That makes the next one researchers spot, regardless of size or duration, probably the most important ever, Vora adds. Now, “we have a way to find them, which is big. We’re not chasing dragons.”