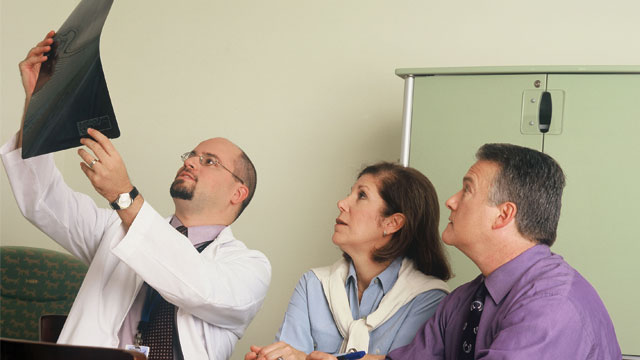 TREATABLE: Exceptional responders are patients whose therapeutic experience diverges from that of the majority of clinical trial participants.© RHODA BAER/NATIONAL CANCER INSTITUTE

Last year, Harvard’s Jochen Lorch and colleagues took a leap of faith by enrolling a handful of patients with a deadly form of thyroid cancer in a clinical trial involving patients with a much more tractable form of the disease. The study was designed to test Novartis’s Afinitor (everolimus) on patients with differentiated thyroid cancer, typically considered a curable disease. Lorch and his colleagues didn’t have high hopes for the anaplastic thyroid cancer patients, who tend to survive less than five months after diagnosis, but with few treatment options, they figured it was worth a shot. Amazingly, the second anaplastic thyroid cancer patient they enrolled responded to the drug: the mass in her chest began to shrink almost immediately.

This case serves as an example of how sequencing the tumors of so-called “exceptional responders” could inform future clinical study. Most oncologists have stories about unusual cases of remission—a drug that didn’t work in the majority of patients but for whatever reason significantly helped one or a few patients. For years, such outliers have made for good news stories, but not powerful data. Indeed, in the context of clinical trials, these therapies aren’t likely to make it to market, despite the fact that they may have helped a small number of patients.

These phenomenal cases stick out in the memories of treating physicians. It wasn’t until recently that we really were able to capture them to explore them in extreme molecular and genetic detail.

“When a clinical trial [fails] or you don’t see broad responses, because there are so many drugs to test and so many diseases in which to test them, we typically move on,” says Barry Taylor, associate director of the Center for Molecular Oncology at Memorial Sloan Kettering Cancer Center (MSKCC). “And yet these phenomenal cases stick out in the memories of treating physicians. . . . It wasn’t until recently that we really were able to capture them to explore them in extreme molecular and genetic detail.”

A couple of years earlier, Taylor, along with MSKCC colleague David Solit and other collaborators, had a similar experience in a trial testing everolimus in bladder cancer patients. While the drug had not elicited positive responses in the majority of patients, one woman had undergone complete remission, with no signs of recurrence even a couple of years after the trial concluded. Sequencing her tumor’s genome had revealed mutations in the related gene TSC1, and sequencing the tumors of eight additional patients who had shown minor responses also revealed mutations in this gene. The difference between the exceptional responder and those with minor responses appeared to be a second mutation in another gene involved in the same pathway, found only in the woman who had undergone remission (Science, 338:221, 2012). Researchers in Boston are now initiating a clinical trial that will enroll patients on the basis of the presence of these and nearby mutations.

Recognizing the value in studying these remarkable responses, the National Cancer Institute (NCI) last September launched the Exceptional Responders Initiative. “The whole idea of exceptional responders rings true for clinicians, because they have a minority of patients—whether they’re treated with investigational agents or treated with standard treatments—that do exceptionally better than other patients treated that way,” says Barbara Conley, associate director of NCI’s Cancer Diagnosis Program.

After identifying some 100 cases of exceptional responders among trial results from the NCI’s Cancer Therapy Evaluation Program (CTEP), the agency felt it could find sufficient numbers of these patients to warrant the establishment of a program dedicated to understanding their responses. The program is now inviting case submissions via e-mail for any patient who underwent a durable remission following treatment with a drug—experimental or already approved—that fewer than 10 percent of patients responded to. The initiative has so far received about 120 submissions. NCI researchers are looking into each case to see which qualify as exceptional responders and have sufficient tumor samples for analysis, and soon, with the help of collaborators, they will begin analyzing the genomes and transcriptomes of biopsies to identify patterns that may explain the patients’ exceptional responses to their anticancer therapies.

“We can’t afford to keep giving drugs that don’t work,” says oncologist and cancer researcher Andrew Biankin of the University of Glasgow. “If we can measure these [genetic] differences [between responders and nonresponders], we can start to impart that knowledge across the broader communities.”