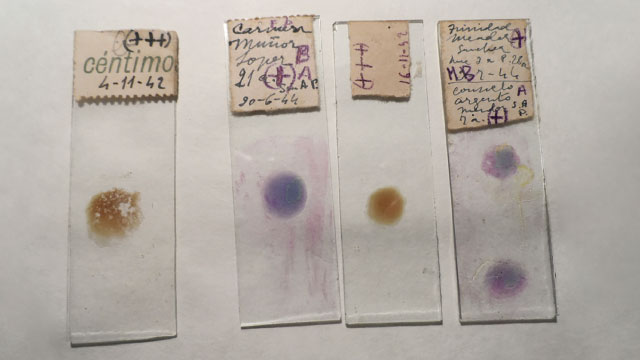 BIOANTIQUES: These slides of stained blood droplets date to the 1940s and contain strains of the malaria parasite that are now extinct.COURTESY OF CARLES ARANDA

The Ebro Delta is a low, marshy region in Catalonia, Spain, that borders the Mediterranean Sea—prime land for growing rice, but also perfect mosquito habitat. Like much of Europe, the area was long burdened with malaria until mosquito-control efforts following the Second World War drove down infection rates, eradicating the local strain of the parasite by 1964.

Decades later, scientists, like investigators at a crime scene, are trying to recover evidence of this lost European strain of malaria. The unicellular parasites responsible for the disease, Plasmodium spp., originated in Africa, scientists believe, and dispersed around the world by hitching rides in their human hosts. Just as globe-trotting humans fanned out from Europe in the colonial era, the now-extinct European strains of Plasmodium played...

Carles Aranda and Raul Escosa, government mosquito-control researchers based in Catalonia, devised a long-shot plan in the 1990s to recover this evolutionary missing link. During the eradication effort in the mid-20th century, the Spanish government conducted widespread malaria surveys to identify and treat affected communities. To confirm the pathogen’s presence in an area, doctors inspected blood samples under microscopes. Aranda and Escosa wondered if anyone had saved a few of those old microscope slides.

The search for slides paid off two decades later when Escosa met the family of Ildefonso Canicio, a doctor who had led eradication efforts in the Ebro Delta. After Canicio’s death in 1961, his daughter and son-in-law held on to his medical equipment, including some slides bearing droplets of blood from malaria patients. The family agreed to donate three of those slides, their yellowing labels dating them between 1942 and 1944.

Aranda and Escosa contacted geneticists and malaria experts to help them analyze the find. Carles Lalueza-Fox, a paleontologist for the Institute of Evolutionary Biology at Pompeu Fabra University, Barcelona, spearheaded the task of extracting readable DNA from the historical slides, drawing on his previous studies of genetic material in ancient human skeletons. “I am used to samples that are difficult, but these [malaria] samples, even though they are much more recent, were of a limited size—they are just blood drops,” Lalueza-Fox says. In addition, Plasmodium cells were mixed in with human blood cells. “I was not sure if I would be able to extract DNA from the pathogen.” So the team tried a few different approaches.

The researchers hit pay dirt when they used DNA “baits,” molecules of biotin bound to short strings of RNA, to latch onto human DNA in the samples. They filtered the samples through beads coated in a substance that binds to biotin and sifted out the baits along with the DNA to which they had attached.

Lalueza-Fox and his colleagues were left with the first genetic material of extinct European Plasmodium species ever studied. They recovered DNA from both P. falciparum, the predominant species in Africa and the species responsible for the majority of today’s malaria deaths, and P. vivax, a less virulent species found widely across the globe. Scientists have long debated how P. vivax arrived in the Americas, with one theory suggesting colonial Europeans brought the pathogen over, while another posits entry from the other direction, when early humans crossed the Bering Land Bridge from Asia. The two theories, notes Jane Carlton, a malaria researcher at New York University who was not involved in the study, are not necessarily mutually exclusive.

The extinct European P. vivax genome more closely resembled strains found today in South America than those found in East Asia, lending credibility to the theory of a more recent introduction by European colonists. The European P. falciparum genome, however, was starkly divergent from the modern South American subtype, supporting the theory that this more-deadly species came to South America directly from Africa during the slave trade. The team published its findings in PNAS this October (113:11495-500, 2016).

But while he and his colleagues re-assembled most of the Plasmodium mitochondrial genomes, they could not capture the complete nuclear genomes due to the limited amount of blood on Canicio’s old slides. So they’re searching for other historical specimens. “I have discovered there is a whole market for antique microscope slides on the Internet,” Lalueza-Fox remarks. A day after their paper was published, he saw a set of five malaria slides go up on eBay for a few dollars. They were dated to England, 1931. “I tried to buy them, and at the last moment of the auction, someone overpriced me and took them!” Until more slides surface on the Internet, he and his colleagues are exploring other sources, such as university medical collections and mass graves containing the skeletons of plague victims.

Piecing together the Plasmodium family tree arms researchers with information about the pathogen they are trying to erase, malaria researcher Richard Culleton of Nagasaki University wrote in an email to The Scientist. “If we can better understand the speed and capacity of the parasite to evolve and adapt to new populations, then we will be better placed to predict where it might go in the future, and how it will react to the implementation of new drugs and vaccines.”