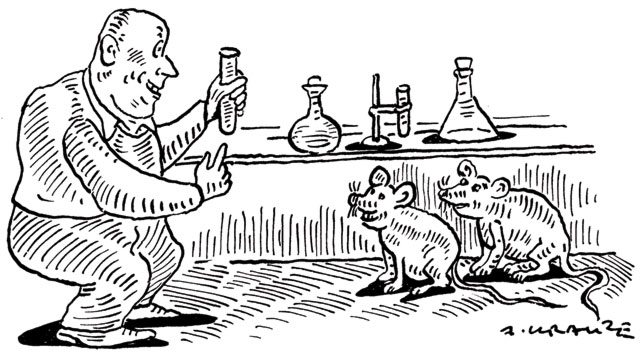 Something was wrong with Terry Hrubec’s mice. Normally, the Virginia Tech biologist’s colonies reproduced with ease, but all of a sudden in 2012 her mice were having a hard time getting pregnant. When they did, mothers frequently miscarried, had fetuses that died in utero, or died themselves during labor. The few mice that were born alive were riddled with birth defects. Hrubec, who studied birth defects for a living, couldn’t understand what was happening. If she couldn’t solve this mystery, her research would be ruined.

Across the country, Patricia Hunt, a geneticist at Washington State University, had been having similar problems. She had recently moved her lab from Case Western Reserve University in Ohio, and the problems started soon after she arrived in Washington. Fertility levels in her mice plummeted. Hunt was equally mystified.

“The females looked fine, the males were interested, but there were no pregnancies....

She began to suspect that some environmental contaminant might be causing the fertility problems. But when she tested the cages for common toxins, she didn’t find anything. Hunt did, however, find residue of quaternary ammonia compounds (QACs), which are widely used in disinfectants. At first she dismissed the idea that QACs were causing problems precisely because they are so widely used, but as time passed, Hunt became more and more convinced. She tried conducting a small pilot study to test QAC toxicity, but couldn’t keep the chemicals out of the control cages. Nonetheless, she presented her results at a 2008 meeting, where a Nature editor did a short Q&A with Hunt, asking her about the mouse fertility mystery.

When Hrubec combed the research literature to find answers to her own mouse issues, she stumbled across Hunt’s Q&A. In Hrubec’s lab, techs wetted their hands with disinfectant containing QACs each time they handled the mice. She immediately called Hunt.

“I was pleased this problem was finally hitting someone’s research right on the head because we were seeing all these birth defects and [Hrubec] was actually studying fetal development,” Hunt says. “I had been trying to talk other scientists into studying this, and they just weren’t biting.”

They decided to collaborate on a larger study to see if the QACs were actually causing the fertility problems. Two of the most commonly used QACs, alkyl dimethyl benzalkonium chloride (ADBAC) and didecyl dimethylammonium chloride (DDAC), aren’t new—they were developed 50 years ago—but their popularity surged in the past 10 years with a growing demand for better disinfectants. These and other QACs can be found in everything from cleaning products to fabric softeners to preservatives in makeup. They are largely considered safe, although no one had ever studied their role in fertility until Hrubec and Hunt.

“They have no smell and no residue, which makes them especially insidious because we don’t know they’re there,” Hunt says.

With her experience studying birth defects, Hrubec took the lead. For six months, she and Hunt exposed breeding pairs of mice to both ADBAC and DDAC in several different concentrations by lacing their chow with these chemicals.

The results of the study, which they published in Reproductive Toxicology, reflected what Hunt and Hrubec had seen previously in their labs. Female mice exposed to QACs took longer to produce their first litter, had more time in between pregnancies, produced fewer pups, and had fewer pregnancies than nonexposed mice (Repro Tox, 50:163-70, 2014). These pregnant mice also had significant health problems due to QAC exposure, and 40 percent had to be euthanized shortly before giving birth.

“This was a high-quality toxicology study,” says Diana Laird, a reproductive biologist at the University of California, San Francisco, who was not involved in the research. “Many people would have shelved the problem, gotten back to their basic research, and moved on,” she adds.

Both Hunt and Hrubec say they don’t know if QACs are harmful to humans or how the chemicals exert their toxic effects. It will be hard to study their effects in humans because they are so ubiquitous in the environment that control groups will be hard to come by, the scientists say.

“I was shocked and horrified to see just how common these chemicals are. This stuff is everywhere. We’re wiping it on our hands and desktops. It’s in my kitchen at home. It’s everywhere,” Hrubec says.

After their study, Hrubec and Hunt began using new cleaners for their labs and switched to new cages that had never been contaminated by QACs. Within months, their mice had their mojo back and were breeding as usual, producing large litters of healthy babies. It took several years to solve their mouse fertility mystery, but Hunt and Hrubec may have exposed a hidden toxicity in some of our most commonly used chemicals.