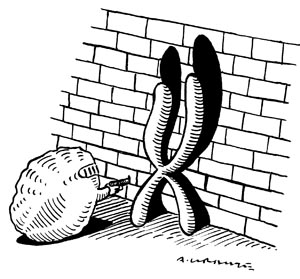 When a cell divides, its duplicated chromosomes have to be shared equally between the two daughter cells. Cells manage this feat by lining up replicated chromosomes along their equators during mitosis, and then pulling sister chromatids apart to the right destinations. But Theileria, an intracellular parasitic protozoan, also needs to divide when its host cell undergoes mitosis. Dirk Dobbelaere and colleagues at the University of Bern have now shown how Theileria hijacks the host cell’s mitotic machinery to ensure its continued survival (PLoS Biol, 8:e1000499, 2010).

Some species within the genus Theileria cause variants of theileriosis, an economically important tick-borne disease that affects cattle in the tropics and subtropics. The parasite infects white blood cells, but unlike the malaria parasite Plasmodium, to which it is closely related, Theileria dissolves the enclosing membrane soon after infection and takes up residence in the cytoplasm. It rapidly...

Dobbelaere first came across theileriosis while working as a vet in Zanzibar, 30 years ago. European cattle imported to Zanzibar were rapidly succumbing to the disease. “I arrived just in time to see the last ones die,” he says. As a result, he got involved in a tick-control project to combat East Coast fever, a severe form of theileriosis caused by the species T. parva. But rather than trying to fight ticks, he got interested in the parasite itself and moved to the International Laboratory for Research on Animal Diseases (ILRAD) in Nairobi, where he studied Theileria for five years.

Dobbelaere left ILRAD with a PhD and eight publications. “I was in a very lucky position, to be able to walk in as a vet and walk out as a researcher,” he says.

It was an old paper in Nature (L. Hulliger et al., 203:728-30, 1964) that piqued Dobbelaere’s current interest in the problem of how Theileria distributes itself between daughter cells. “I was intrigued by the efficiency of the process,” he says. He was finally able to address the problem when he read a more recent paper that described a highly specific inhibitor of a key mitotic kinase, Polo-like kinase 1 (Plk1).

Dobbelaere’s graduate student, Conrad von Schubert, used this inhibitor, called BI-2536, to perform what F1000 Member Christine Clayton at the University of Heidelberg calls a “very careful inhibitor-based analysis” of the parasite-microtubule interaction. After observing host Plk1 molecules studding the surface of schizonts during mitosis, von Schubert used BI-2536 to stop the action of Plk1 at precise stages during the cell cycle. This enabled von Schubert and Dobbelaere to build a model of how the parasite interacts with the mitotic apparatus at each stage of cell division.

First, the schizont binds to newly formed microtubules at the spindle poles, spreading itself over the mitotic spindle where the condensed host chromosomes assemble at metaphase. Then, as the sister chromatids are pulled apart at anaphase, the parasite recruits Plk1, which allows it to latch onto the central spindle that forms between the two sets of host chromosomes. Because Plk1 contributes to the control of the cleavage furrow and the contractile ring that eventually separates the two daughter cells, the Plk1-studded schizont attracts the contractile ring to form around its own middle, squeezing it in half and dividing it equally between the two new cells. Critically, von Schubert was able to shut down Plk1 activity at anaphase using BI-2536, with the result that as the host-cell contractile ring closed, the parasite was confined to just one daughter cell.

Despite these insights, the identity of the molecule on the parasite’s surface responsible for binding Plk1 remains mysterious. Also unknown is how Theileria gets into a host cell in the first place. The parasite doesn’t bind to mouse or human white blood cells, and he would like to find out what bovine receptor is responsible, so the parasite could be studied in better-modeled cells. Additionally, the United States prohibits the import of Theileria, and very few groups worldwide are working on it. Dobbelaere hopes that his paper sparks interest in the parasite, and that more researchers get involved.

A Hidden Jewel refers to an article evaluated in Faculty of 1000 that was published in a specialist journal. You can read evaluations of Dobbelaere’s article here.