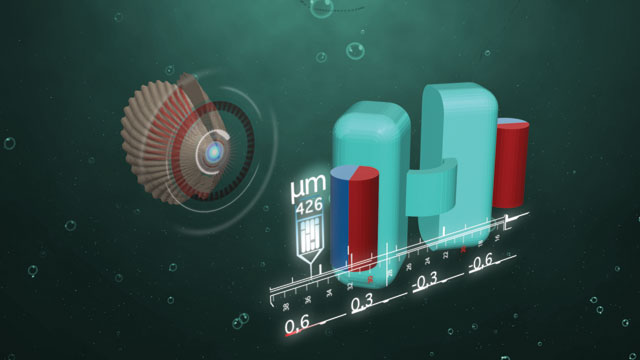 MICRO-SCALLOP: Peer Fischer and his team at the Max Planck Institute for Intelligent Systems in Stuttgart, Germany, revisited Edward Purcell’s “scallop theorem” to design a robot that could potentially navigate the human circulatory system.ALEJANDRO POSADA/MPI-IS

The physicist Edward Purcell, who in 1952 shared a Nobel Prize for discovering nuclear magnetic resonance, later turned his attention to the movement of microorganisms through liquids. In a 1977 paper, Purcell put forth the now famous “scallop theorem.” Through a series of calculations, he showed that scallop-like, reciprocal opening and closing motions could not propel a microbe forward through a fluid, and concluded that flagella must rotate asymmetrically to allow bacteria to move (Am J Phys, 45:3-11, 1977).

In water, a Newtonian fluid in which a moving object does not affect viscosity, large beings such as humans can glide along, but microbes are limited by a low Reynolds number—the ratio...

But the physical properties of blood and other bodily fluids differ dramatically from those of water, says Peer Fischer, who directs the Micro, Nano, and Molecular Systems Lab at the Max Planck Institute for Intelligent Systems in Stuttgart, Germany. In their quest to design micro- and nanomachines for applications such as drug delivery and diagnostics, Fischer and his team recently revisited the scallop theorem. They reasoned that in a non-Newtonian fluid such as blood, reciprocal motion—like the opening and closing of a scallop’s shell—might actually allow a small body to swim.

The advantage of micro-scallops is they’re easier to actuate, so you don’t need to go through these more complicated ways to move them.—Henry Fu, University of Nevada, Reno

“We can get around this scallop theorem if we move in precisely the sort of liquids we want to move in, because there, the viscosity is not constant,” says Fischer. “So even something as simple as a scallop that opens and closes works—provided you open and close at different speeds.” The contrasting speeds effectively alter the viscosity of the liquid, which drives the “microswimmer” forward.

Fischer’s group used 3-D printing to construct a glow-in-the-dark “micro-scallop” made of two 300-micron-wide silicone shells with a 200-micron-wide hinge. “Exceptionally small magnets,” he says, allowed the shells to be opened and closed by applying an external magnetic field. Changing the strength of the field at regular intervals produced a series of slow openings and rapid closings, propelling the micro-scallop through simulated blood—polypropylene glycol with silica particles suspended in it.

The researchers observed changes in fluid viscosity and forward displacement of the micro-scallop that closely matched their theoretical predictions. The miniature mollusk moved about 100 microns in 40 seconds (Nat Commun, 5:5119, 2014).

“People have made microrobots. . . .that can swim on the order of 100 microns per second, and they’re also much smaller. So these are not necessarily fast,” says Henry Fu, a mechanical engineer at the University of Nevada, Reno. “But the advantage of these is they’re easier to actuate, so you don’t need to go through these more complicated ways to move them in a nonreciprocal way.” Fu and his colleagues recently developed a relatively simple artificial microswimmer propelled by a rotating magnetic field (Phy Rev E, 90:033007, 2014).

Fischer calls the micro-scallop “a proof of concept,” and says it may open up new possibilities for the burgeoning field of microrobotics. Penn State’s Sen agrees that the device could serve as a model for designing simpler motors, but cautions that “it’s going to be hard to guide things precisely through the body using this mechanism.”

Nanoengineer Joseph Wang of the University of California, San Diego, thinks a combination of acoustic propulsion and magnetic guidance could be the way forward. His team recently used this approach to control the movements of red blood cells (ACS Nano, 8:12041–48, 2014). “This is a new field,” says Wang, “but there’s been a dramatic improvement. . . .Until two or three years ago we couldn’t even do swimming in blood.”

With lessons learned from testing a decades-old theorem, Fischer says his team is working to build devices suited to clinical use. “The point isn’t that you should be building a scallop of this shape, because that’s not a very good swimmer,” he says. “You can now use all these actuators to make a whole array of new swimming and moving devices.”

Despite its ease of movement in biological fluids, the micro-scallop’s opening and closing shells don’t truly mimic the motions of its namesake. “If you look at a real scallop, it sort of sucks in water and squirts it out, but that’s not what’s going on here,” says Fischer. “So it’s a physicist’s scallop, if you like.”